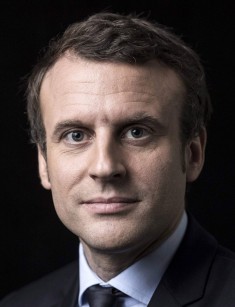 Emmanuel Macron is the President of France who won the victory at the 2017 elections; he used to be the Minister of Economy, Industry and Digital Affairs in Holland’s administration and the leader of the party En Marche! (Forward!).

The would-be politician was born on December 21, 1977, in Amiens, into the family of a professor. The boy’s father, Jean-Michel Macron, taught neurology at the University of Picardy; the mother, Françoise Macron-Noguès, worked as a physician.

In his childhood, Emmanuel went to a Jesuit Lycée; later, he studied at the École Normale in Paris. After the young man graduated from school, he entered the University of Paris-Ouest Nanterre La Défense. Macron was a sophisticated person and stood out among his peers. For two years he worked with a philosopher Paul Ricœur. In 2002-2004, Emmanuel attended the École Nationale d'Administration.

In 2004, Macron began his career as an Inspector General of Finances in Jacques Chirac’s administration; he worked there for four years. In 2007, the political figures changed; Macron became a deputy rapporteur for Jacques Attali's "Commission to Unleash French Growth.”

In 2008, the young politician got engaged in investing. The intelligent economist was invited to work at Rothschild & Cie Banque; he proceeded with several deals related to reselling of European companies and increased his own income up to several millions of euro.

As an employee of the presidential administration, Emmanuel Macron joined the Socialist Party in 2006; he spent three years there. Macron dealt with economic and investment issues and monitored the political atmosphere in the society. When Republican Nicolas Sarkozy was the President, Emmanuel became the member of the government; during the next elections, he supported the social-democrat candidate François Hollande.

In 2012, Macron started climbing the career ladder quickly. Emmanuel became the Deputy Secretary General to the President; two years later, he gained the position of the Minister of the Economy, Industry and Digital Affairs.

It was a significant moment for Macron. The politician introduced many liberal laws. In 2015, after numerous arguments, the government approved of the Macron law aimed at stimulating the economic growth by the liberalization of several economic sectors. Transport employees and workers were protesting; however, large businesses benefited.

As Macron was watching the political system inside, he realized no political movement met the interests of the society. The young minister decided to create his own party and use private donations. On April 6, 2016, En Marche! was founded. An average member’s donation was $50; there were about 30 000 registered participants in the organization. Some Rothschild family members and Pierre Bergé, a gay activist and Yves Saint Laurent’s partner, joined the party.

Macron’s opponents believed the politician was the project of big business leaders (pharmacy, chemical industry, banking): they wanted to use the young politician to have the existing laws liberalized.

On November 16, 2016, Marcon presented his program “Revolution.” The leader of social liberals promoted the change of the system of the French government and migrant settlement: Emmanuel convinced voters the migrant course was right because of the economic advantages to the country. In his book, Macron called himself an “out-of-system” politician and revealed many secrets of the governmental backstage. The book was bestselling among the population.

Emmanuel Macron supports the idea of the European Union and collaboration between France and neighboring Germany. The politician also encourages to strengthen international economic connections and opposes uncontrolled foreign investment.

As to Palestine and terrorists, Macron’s position is radical. Emmanuel supports the idea of migrants’ free settlement in France; at the same time, he believes open demonstration of religious feelings should be limited. The politician plans to strengthen the financing of the French intelligence services and police.

Macron was going to act on the international arena carefully: no grudge against the USA hegemony but no tolerance of America’s diktat in terms of French global position.

The politician planned to keep economic and international politics with Russia. As for Ukraine, the candidate stuck to the Minsk Protocol conditions. Macron also mentioned he was going to reduce sanctions against Russia.

At school, Emmanuel fell in love with his teacher of French Brigitte Trogneux. The young man did not mind there was a significant age difference (24 years), the woman’s marriage, and the fact she had three children, Sébastien, Laurence, and Tiphaine, who were of the same age as Emmanuel. At 17, Macron swore he would marry his beloved one when he would turn 30.

Macron’s parents were puzzled by their son’s obsession; Jean-Michel had to send the boy to Paris. Emmanuel and Brigitte were texting for 13 years. The young, handsome, brown-haired man was showered in women’s attention, but he continued to think of Brigitte. In 2007, Macron proposed to Trogneux who had already divorced; the couple married soon.

Macron’s wife comes from a wealthy chocolatier dynasty that lived in Amiens. Today, Brigitte does not look like a former teacher and a grandmother who has six grandchildren. Tanned and fit, the blonde impresses people of France with her dresses and snow-white smile.

The family lives at the villa in Touques bought by Brigitte and Emmanuel the year they married. Macron cannot imagine his life without his wife; he is firmly attached to her.

The young politician emphasizes he is close to his wife and denies the rumors that he is gay. Once, he sued a young woman who tried to establish a close relationship with him. At the court, Macron confirmed he was not going to cheat on his wife; female voters were excited.

During the pre-electoral campaign, Brigitte always accompanied her husband; there are many photos of that period where the couple appeared together. Emmanuel claims his wife is not going to be engaged in politics, but she will become a close advisor regarding state issues.

On April 23, 2017, the first tour of the presidential elections took place in France. 11 candidates participated; only two of them made it to the second tour: the leader of the National Front Marine Le Pen and the leader of the movement En Marche! Emmanuel Macron.

Monday news surprised international observers: the youngest candidate, Macron, had the highest ratings: the former minister of economics got 23,75% of the votes while Marine Le Pen had 21,53%.

On May 7, 2017, the second tour of the elections occurred. 20,7 million of people voted for Emmanuel Macron; Marin Le Pen had 10,6 million votes. On May 8, 99,9% of ballot papers were processed; the Ministry of the Interior announced the final results: Macron won the presidential elections. According to the official data, he had 66,06% votes; Le Pen got 33,94%.

Thus, Emmanuel Macron broke the record in the history of modern France: at the age of 39, he became the youngest leader of the country. 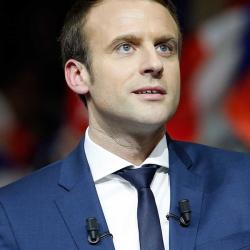