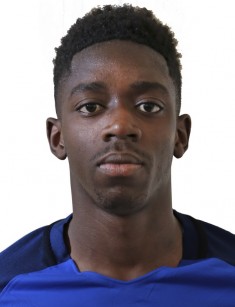 Funny and amusing nicknames continuously stick to professional player Ousmane Dembele. The young man was nicknamed “Wonder Kid” for his small height (1,78 m) and low weight (67 kg). The Frenchman is called "Knife" for the sharp game and no less arrowy tongue. The career of the young man is very successful as the last transfer fee was € 105 million, which showed the value of the player for the club.

Ousmane Dembele was born in Vernon, in the north of France, on May 15, 1997. The boy's parents, Ousmane Snr and Fatima Dembele, moved to Europe from Mali and Mauritania to find a job that was almost impossible to do in West Africa.

Soon, the family had more children. By the way, despite the surname, Moussa Dembele is not the brother of the football player. The young people are not relatives.

At the age of six, it became clear to parents that the eldest son was not very diligent and with great interest spent his time playing football instead of studying. The couple decided not to limit the boy.

Ousmane’s sports career began in the youth sports school in Évreux. In 2010, Dembele entered the Academy of Rennes. During the five-year studying, Ousmane became the player of the first team from a promising newcomer. It is not surprising because in the season 2014/2015 Dembele was named the best youth player.

FC Red Bull Salzburg and several Portuguese clubs became interested in the promising young man, but Ousmane preferred to stay in his team. Fatima Dembele did her utmost for it. She considered that it was better for her son.

Increased interest in the footballer is understandable. At a young age, Dembele showed good speed during the attack and dribbling skills, maneuvering of a ball while moving in a given direction, avoiding defenders' attempts to intercept the ball. Another Ousmane’s undoubted advantage is ambidexterity. The young man does not have a stronger foot, and the football player uses both feet equally well.

In 2015, Ousmane signed his first professional contract. Dembele scored the first goal as a professional player in the second match. But the player could surprise the football fans at the end of the season when Ousmane scored a hat-trick in the game against Nantes.

After this match, the Scouts of Barcelona showed interest in Dembele, but the club management did not agree to pay € 35 million (Rennes set the transfer fee by Rennes) for the young player. Club Borussia Dortmund used the opportunity. The club's coaches immediately appreciated the player’s skills to play on different positions as a forward on the field.

During the first season in the new club, the player scored ten goals and had 22 assists. There was a scandal shortly after Dembele's transfer to Borussia. It turns out that besides Dortmund, the young man has agreed to personal terms with Bavaria.

However, the club representatives contacted the dismissed agent of the football player, so they missed their chance. Dembele’s current representatives filed a lawsuit against the former colleague to get compensation for the damage to the footballer’s reputation.

In May 2017, it became known about Ousmane’s transfer to a new club. The transfer caused another scandal. Barcelona showed interest in the player again, but Borussia Dortmund did not plan to break the contract with the prospective striker. When Dembele found out about it, he stopped attending training. The owners of the team had no choice but to terminate the contract with the player.

Professional athletes and coaches were outraged at such behavior. Besides, one more player, Pierre-Emerick Aubameyang, repeated the same trick.

The problem of the transfer fee to Barcelona came up too. The football club gave Dembele € 105 million with his buyout clause set at €400 million, which in case of sale would make him the most expensive player. The player got a € 42 million bonus too.

Since August 2017, Ousmane Dembele has already played in Barcelona wearing the number 11 shirt. A month later the public became aware of the salary of the new player. Ousmane will earn € 12 million a year, but after achieving the desired goals, which they have not disclosed, the wage will rise to € 20 million.

The public avidly follows how Dembele and Philippe Coutinho (one more new player of the club) get used to a new team. Ousmane immediately began to play his favorite role (striker), but, after receiving a severe injury, he was out of action for four months.

In December 2017, it became known that Ousmane returned to the field and is preparing for a match against Real Madrid, in the under-17s Primera Division. He underwent a complicated operation after the tendon rupture of the left hip, which kept him out of the action for such an extended period.

Nowadays, Ousmane Dembele is focused only on his career. The man has not yet thought about a wife and children. He devotes all his strength to training and regular matches. The family supports Ousmane in all his endeavors. The player’s mother often advises his son how to act in this or that situation, and does not allow the young man to suffer from VIP syndrome.

2018 was very traumatic for the player. In January, an old trauma, which he got in September of 2017 during the Under 4s Primera Division, began to hurt again. Ousmane had problems with the injured semitendinous muscle of the left thigh.

In May 2018, Dembele dislocated his right ankle during a game against Real Sociedad. After a thorough examination, doctors stated that the injury was insignificant, and the player quickly returned to the training.

In March, football analysts drew attention to the fact that three European clubs Arsenal, Liverpool, and Atletico closely followed Ousmane’s play in Barcelona. When it became known that the coach Ernesto Valverde dissatisfied with the new player, rumors about the next player’s transfer appeared again.

The player has made clear that he is not going to leave Barcelona after the first season. A couple of weeks after the interview with Dembele, the newspaper Mundo Deportivo published an article where they assumed that Barcelona could loan the young man this summer transfer window.

When it transpired that Barcelona could buy Antoine Griezmann, Dembele shared his thoughts about transfer to another team. The man has been worried that after the famous football player joins the team, his playing time, already minimized, will be further reduced.

However, Josep Maria Bartomeu, the president of FC Barcelona, has openly stated that he is not going to sell the newly acquired player. However, Ousmane is not upset about an uncertain future. The young man regularly posts funny photos on his personal Instagram account and does his best in every match of the national team during the World Cup 2018 (the current World Cup is held in Russia). 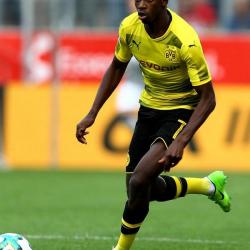