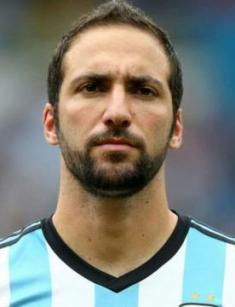 The center forward of the Italian Juventus with number 9 T-shirt and the player of the Argentina national team, Gonzalo Higuaín, is a world-famous football star. He won the 2014 World Cup silver medal.

Gonzalo was born in a family of a footballer. The father of the future star, Jorge Higuaín, was a center-back of Stade Brest at the time of his son’s birth. Then Jorge played for the Argentine clubs: San Lorenzo de Almagro, Boca Juniors, and Club Atlético River Plate. Higuaín Sr. won the Argentine Primera División two times, playing for the last one.

The football player’s mother has nothing to do with the world of sports; Nancy Zacarías is an artist.

Gonzalo was born in the far west of France, in the port city of Brest, Brittany, at the end of 1987 and acquired French citizenship. Like his parents, Gonzalo Higuaín is Argentinean.

In addition to Gonzalo, three more sons, Nicolás, Federico, and Lautaro, grew up in the family.

The Higuaín family returned to their homeland when Gonzalo was not even one year old.

The father instilled in his son a love for the most popular sport on the planet, but the Juventus striker has recently admitted in an interview that he loved tennis in childhood. There are no ifs in history, but for football, Gonzalo would have chosen tennis. However, Higuaín does not doubt that sport would play a significant role in his life.

The 16-year-old athlete made his debut in the famous Argentine club, River Plate. El Pipa (Jorge Higuaín’s nickname) became renowned playing for this team. The son was nicknamed El Pipita after his father.

Not only his father but also his older brother Federico played in the River Plate club. Now he is an attacking midfielder of the American club Columbus Crew.

The first prominent match of the young player was the game against Boca Juniors. El Pipita managed to net a double in this match and attract the attention of scouts of famous European clubs.

Gonzalo Higuaín’s career in the club developed rapidly. In December 2006, El Pipita, whom the manager of the Argentine club after a junior derby predicted a bright future, moved to Real Madrid. The transfer fee was €13 million. The Whites managers did not regret the purchase because in the 2008-2009 season Higuaín scored 22 goals in the La Liga, and in the next season he scored 27 goals, which allowed the player to become the La Liga's second-top goalscorer, behind Lionel Messi.

The striker scored his 100th La Liga goal for the royal club in an away match against the Spanish Deportivo de La Coruña.

In the middle of the summer of 2013, Gonzalo Higuaín left the team and moved to Napoli. It is believed that the Italians paid € 37 million for the deal. On August 1, Napoli officially confirmed the signing of the Argentine. Higuaín played for the Napoli squad for three years. Although he did not manage to win the Serie A, he set a record, scoring 36 goals during the regular season, which equaled the record set 66 years ago.

In July 2016, Gonzalo Higuaín changed the team again. This time, he moved to the old and titled club from Turin, Juventus. The Zebras signed a five-year contract with the Argentine striker.

Higuaín succeeded in the first season, having won the Serie A. Gonzalo scored 24 goals in the 38 Serie A games. Playing for The Black and Whites, the footballer won the Coppa Italia and achieved a double.

Gonzalo Higuaín is one of three Argentine footballers who played for the national team at the FIFA World Cup. For the first time, Higuaín excelled in a friendly match with the Guatemalan national team in 2008 when the striker scored two goals, although FIFA did not officially recognize the game.

In the spring of 2013, the forward scored twice as Argentina beat Venezuela 3–0.

The forward admitted in an interview that he wanted to complete his career in the national team when he learned about his mother’s illness in 2016. But at her request, he remained in the team. Nancy Zacarías is the main woman in the heart of Gonzalo. The footballer often posts his mother’s photo on Instagram, expressing his love and gratitude.

The statistics of the striker at the end of the 2017/2018 season are as follows: he has participated in 556 games, scoring 282 goals during his career.

The forward of The Old Lady is one of the highest-paid players in the team. Higuaín’s salary is € 7.5 million per year.

Ladies love the hot Argentine player for brown eyes and brutal beard. But some people like Gonzalo without a beard. The footballer did not hesitate and said in an interview that he preferred the Argentine women.

At the 2010 World Cup, the striker appeared together with a model and actress, Luciana Salazar, who was called Argentine Pamela Anderson for her bust size. The beauty became famous in the homeland for filming in the TV series. Salazar is the former Playboy model. She was credited with a love affair with Messi in 2008, but the relationship was not meant to end in a wedding.

Luciana did not become Gonzalo’s wife either. They separated after the FIFA World Cup. The footballer does not like to talk about his personal life and does not consider relations with new girlfriends serious.

In February 2018, the striker of the Old Lady scored a goal in the round of 16 of the UEFA Champions League in Turin. It should be mentioned that The Black and White head Massimiliano Allegri preferred the Argentinean to Harry Kane, a Tottenham striker.

Higuaín scored the first two goals against Tottenham. The striker could not net a hat-trick at the end of half an hour, and later he missed a penalty, hitting the crossbar and missed the opportunity to secure a 3–1 victory of The Black and White.

In February 2018, Gonzalo suffered an ankle injury in the game against Torino but recovered in a week.

In the spring, Higuaín joined the Argentina national team to participate in the 2018 FIFA World Cup in Russia.

Gonzalo Higuaín has a net worth of $16 million.