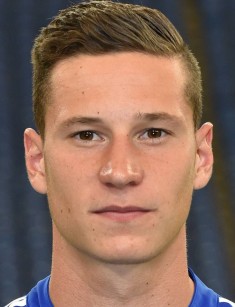 The young promising midfielder of Paris Saint-Germain and the German national football team had to win the love of fans, despite the brilliant results on the field. There were scandals connected with footballer’s career and personal life. However, football fans cannot ignore football player's achievements field.

The great midfielder of the German national football team was born in German Gladbeck on September 20, 1993. The father of the future midfielder was a good footballer in the past. In 1977, Draxler Senior became The Under 19 Bundesliga Winner together with FC Schalke 04.

It was the father who instilled a love for sports. One day the man took little Julian to watch Schalke 04's match. After an outstanding game, the boy began to dream of football.

Julian's elder brother also devoted his life to sports, but he did achieve the same success. The young man plays for the regional league club. It's no wonder that since early childhood, little Julian was keen on football. According to the football player and his relatives, he could have slept with the ball instead of a pillow.

The young man attended the Heisenberg-Gymnasium in his hometown. Later, when his football career began to develop, he changed it to Gesamtschule Berger Feld. According to Draxler, it was complicated to combine study and training. The student had to choose between the field and books.

Julian often chose the school, especially during the preparation for the final exams. According to Draxler, the school and education were essential.

Since early childhood, Julian Draxler’s biography is connected with football. The boy came on the field at the age of five, having started training in his native town with BV Rentfort. The boy often played on the field after training, asking his father to kick the ball even at home. Soon, the young athlete came closer to professional football, joining SSV Buer 07/28.

The boy gained a reputation of a fast, active player, who could show good results on the field. Soon, the agents of youth teams became interested in the promising player. Less than a year later, at the age of seven, Julian joined Schalke 04.

At the same time, in January 2011, Draxler debuted in the DFB-Pokal, coming on as a substitute for Peer Kluge at the end of the match. In the last minutes of extra time, the player scored the winning goal.

Soon the midfielder made his UEFA Champions League debut on February 2011. Goals and assists helped the club to win the DFL-Supercup. After the successful performance, the young man extended the contract with native Schalke until 2016. In 2013 he extended it until 2018. Then the midfielder got an honorary number 10 on the T-shirt.

However, in 2015 the talented football player left FC Schalke and joined VfL Wolfsburg. However, the midfielder was not destined to play in the team of Wolves for a long time. Juventus and Arsenal became interested in the young talented player, wishing to get the player into their clubs.

The German club refused to negotiate the transfer. They stated that it was not possible to sell the talented player since they recently sold important player André Schürrle.

The transfer to the European club with worldwide fame indeed meant another breakthrough in player’s career and a new stage of development. Finally, the pressure reached a crisis point, and Draxler openly told in an interview about his desire to leave the Wolves and the leadership's refusal. The Wolfsburg leadership imposed a fine on him.

However, having paid € 100 000, Julian left the provincial German club and joined Paris Saint-Germain. According to the Le Parisien newspaper, the football player salary was € 850 thousand per month.

Draxler’s action caused an immediate negative response and an open outrage of fans. Fans thought that the midfielder was only interested in money and he was ready to change clubs like socks, pursuing lucrative offers.

Meanwhile, despite the negative comments on social networks, Draxler continues to play brilliantly on the field. Julian scored a goal in the first match for the Paris club. PSG coach sees the player's excellent performance, speed, ball control and passing. The young man became the Coupe de la Ligue Winner in the 2016/2017 season, and the following year, he together with the team won the Coupe de France.

Besides the club career, the midfielder distinguished himself as a player of the German national football team. Tall, fast young football player (his height is 185 cm with a weight of 74 kg) joined the Germany national youth football team at the age of 17. Draxler provided an assist and scored a goal in the first match.

At the FIFA World Cup 2014 in Brazil, the midfielder was named in Germany's 23-man squad. In the friendly match against Poland, the young football player came on as a captain, becoming the youngest player in the national team with such an honor. As a result, he entered the final squad of the national team, made his debut in the match against Brazil, which ended with 7–1 victory over Brazil.

As for the 2017 FIFA Confederations Cup, which the German national football team won, it is noteworthy that Julian became captain and was in the starting lineup.

Julian has had the relationship with Lena Terlau for a long time. The young people studied together in the gymnasium and even shared the same desk. However, they fell in love much later. The girlfriend supports the lover and tries to attend the matches with Julian.

The young man initially gained the reputation of a family man and a man who has loved only one woman in his life. Fans thought that he preferred to read books and to rest at home instead of clubs and restaurants. Unexpectedly, in 2017, there was a scandal about Draxler's personal life.

The newspaper Bild found out interesting facts. Shortly before the Confederations Cup, the young midfielder asked the national team coach to let him go to Barcelona for a couple of days. The footballer linked the trip to the necessity of having a rest.

However, soon the pictures of the midfielder on a yacht together with a hot blonde, a model from Munich and a participant of the show Germany's next top-model. The public was outraged, demanding that the coach punish unfaithful Julian. However, the coach of the team said that only the result on the field mattered for him, and the personal life of the players does not concern anyone.

No one knows how Lena overcame the scandal. The girl forgave the unlucky guy. The footballer tries not to share the details of the incident, and, on the whole, hide his relations from the public eye. Julian tries not to post photos with beautiful Lena on his Instagram page.

After the PSG victory in the Coupe de France in 2017-2018, the midfielder began to focus on the participation of the national team at the 2018 FIFA World Cup in Russia. Draxler appeared already in the opening match against Mexico, which became sensational.

The 2014 FIFA World Cup Winners suffered defeat to Mexico. Despite the fascinating, brilliant game, the odds were against the Germans, who could not score a single goal.

By the way, Julian always spoke positively about Russia. The footballer was already delighted with the sports events management and the warm welcome after the victory at the 2017 FIFA Confederations Cup.