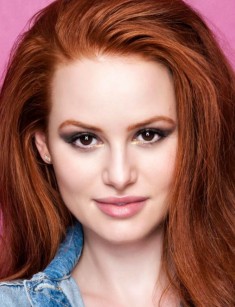 The CW Television Network is famous for its projects Supernatural, Arrow and The 100. It released another successful series Riverdale. This project is based on the characters of old comics (it is not superhero comics like Arrow, Supergirl and DC's Legends of Tomorrow), but the creators of Riverdale made it clear that it would not be a censored film, but a modern version of the TV series Twin Peaks, suitable for young viewers. Novice actress Madelaine Petsch performed one of the leading roles in Riverdale.

The future actress was born on August 18, 1994, in the small town of Port Orchard, Washington, USA. Madelaine's parents divorced when she was small. Since the girl's father moved to his homeland in South Africa, she spent her childhood dividing her time between two continents.

Petsch showed her talent quite early. At the age of three, the girl already began dance classes, and at the age of five, she studied in a theater group. Therefore, it is not surprising that, after graduating from South Kitsap High School, Madelaine immediately moved to Los Angeles to pursue an acting career.

Petsch found an agent rather quickly who immediately took her to an advertising campaign for Coca-Cola. It happened in 2014. Madelaine’s manager decided that to shoot in a commercial of a well-known brand was a right decision, because the large audience, as well as the famous representatives of the world of cinema and television, would see the beginning actress.

It partly happened in 2015, when Madelaine played a bit part of a mermaid in the family comedy series Instant Mom with Tia Mowry and Michael Boatman.

The series was followed by a debut in a full-length movie. Petsch starred in the fantasy horror film The Hive directed by David Yarovesky, a director who had previously shot only short films. In the story, a plane carrying a dangerous virus that can affect people's brains crashes near the summer children's camp. Yarovesky wanted to make a film similar to The Crazies by George Romero and Invasion of the Body Snatchers by Philip Kaufman. And he succeeded.

The next film with the participation of the young actress was also a horror one, but this time she changed a fantastic subgenre for a fantasy genre. The new film was entitled The Curse of Sleeping Beauty. The director was Pearry Teo (The Gene Generation, Necromentia, Witchville), and the film featured Ethan Peck, Natalie Hall, and Bruce Davison. The movie was released in 2016.

In the story, the title character inherits the mansion out of the blue. As usual, such an unexpected gift keeps dangerous secrets, and the heir, the realtor, and the local priest have to find out them. Otherwise, this movie is a modern version of the famous tale about Sleeping Beauty, who has not woken up for a long time.

After the release of Pearry Teo’s horror movie, Madelaine received an offer to play in the TV series Riverdale. At first, the girl wanted to refuse, but she changed her mind having understood the importance of the project.

In fact, Riverdale is a screen version of comics about Archie and his friends. The heroes live in the town of Riverdale. These comics were first published in the 1940s, so the style and genres were changed more than once throughout their long history. So during one of the experiments, another series of comics about Sabrina Spellman appeared. Later, these comics were filmed, and the TV series Sabrina the Teenage Witch with Melissa Joan Hart was released.

There were other screen versions devoted to Archie, but they were the animated series. The creators decided to shoot the new project with real actors. KJ Apa appeared as Archie Andrews, Lili Reinhart as Betty Cooper, Cole Sprouse as Jughead Jones, Camila Mendes as Veronica Lodge, and Madelaine Petsch as Cheryl Blossom.

In the first season, the heroes tried to solve the murder of Cheryl Blossom’s brother, Jason (Trevor Stines), revealing the dark secrets of the inhabitants of their town. Viewers warmly welcomed Riverdale, and the creators soon announced the second season.

Madelaine does not speak about her family. It is known that when the parents divorced, the mother stayed in Port Orchard, and the father moved to South Africa. Petsch has mentioned her brother Shaun, who also pursue an acting career.

Since the summer of 2017, the actress has dated an actor and musician, Travis Mills.

Like her colleague Lili Reinhart, Madelaine uses Twitter and Instagram to communicate with her fans. For the same purpose, Petsch has a blog on YouTube video hosting, where she shares the details of her biography, and also talks about behind the scenes secrets of Riverdale. It is worth mentioning that the young woman does not feel embarrassed appearing in public or in front of the camera without makeup.

At the age of 14, Madelaine became a vegan, and before she had been a vegetarian. Besides, the woman has also participated in an awareness campaign for PETA, founded in 1980 by Ingrid Newkirk and Alex Pacheco.

The actress loves to share her photos with fans. Subscribers have noticed that Petsch looks like actress Holland Roden, the star of the TV series Teen Wolf, Weeds and Grey’s Anatomy. The woman’s height is 168 cm, and her weight ranges from 45 to 50 kg.

In November 2017, the first episode of the second season of Riverdale was released. There are rumors that Petsch will appear naked in one of the last episodes. However, neither the actress nor the creators of the series officially confirmed it.

Besides, in 2017 the comedy F the Prom will be released, in which Madelaine also takes part. The film was directed by Benny Fine, who had previously shot the reaction of children and adults to different events and posted it on YouTube.

In January 2018, the horror film Polaroid, which tells about the damned camera, will be released. Those who have their picture taken will die the following day. But the entire class of American high school has been photographed. The students have a day to change the situation for the better.

The 2018 Polaroid is a full-length version of the short film by Lars Klevberg, released in 2015. In addition to Madelaine, the film will star another familiar actor of this genre, Javier Botet (he played the role of monsters in the horror films Mama, It, The Mummy, The Conjuring 2, REC 3: Genesis and others). 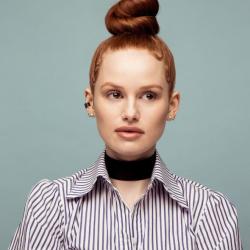