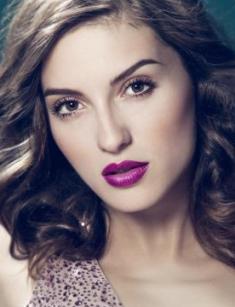 María Valverde Rodríguez is a Spanish actress who is famous all over the world for such films as Three Steps Above Heaven, Melissa P., Gernika, Ali and Nino, and many others. She was born in Madrid. The girl's childhood also took place in the Spanish capital, namely in the area of Carabanchel. Relatively close to the house of Valverde were the Drama Theater and the famous prison for political prisoners.

In María's family, in which she was the only child, all people were directly involved in creativity. The father of the future actress was engaged in painting, and her mother received an education in modern sculpture, although later she re-qualified as a nurse. In addition, her grandfather, who became a very close person for his granddaughter, headed one of the local theaters. María Rodriguez Valverde's favorite dog was a golden retriever named Rufus. Most of the time, the future star spent behind the scenes of the grandfather's theater, looking at the rehearsals of artists, makeup artists, and illuminators. This magical world is so fascinating to the child that Valverde wanted to become an actress very early.

María made her debut on the stage at the age of 10. Over the years, her rebellious spirit was born, which the girl began to pour out on their stage roles. She spent every summer in Guadalajara, where the youth organized improvised performances, so still, a teenager gained a decent experience of transformation in various characters. Valverde studied acting in several studios in Madrid and synthesized her knowledge to find her own style in art.

It is worth noting that as a teenager, María was very fond of modern musicians, especially Kurt Cobain and his band Nirvana, as well as the work of Canadian singer Nelly Furtado. But María Valverde's biggest love has always been the movie industry. She spent long hours in front of the screen, knew the stories of many films by heart, and caught every movement, gesture, and change of mimicry of favorite actresses.

The burning desire of María to become a movie actress came true when she was not yet 16 years old. She took part in the filming of the social drama The Weakness of the Bolshevik and worked together with Luis Tosar in a wonderful duet. The first role brought the girl the most honorable Spanish movie award Goya Award for Best New Actress. This success was followed by a humorous thriller, Body Confusion, and melodrama Vorvik.

Later in María Valverde's filmography appeared a large-scale saga about the Borgia family, where she got the role of Lucrecia Borgia, the eldest daughter of Rodrigo, better known as Pope Alexander VI. After this project, María was compared to one of the most famous Spanish stars, actress Penélope Cruz. Somewhat less famous outside Spain were the thriller Thieves, action movie The King of the Mountain, the historical drama The Sandman, and the romantic story The Anarchist's Wife. But in all of them, Valverde played lead roles, as in the sensational social drama about school life Cracks, where along with her brilliantly played Eva Green.

But for the many viewers, the Spanish actress became widely known after the release of the youth melodrama Three Steps Above Heaven and its continuation I Want You. Mario Casas, Clara Lago, and Marina Salas starred opposite the Spanish actress. It is worth noting that the popularity of the actress also contributed to the military drama Guernica, a fantastic action TV series La fuga and a psychological picture A puerta fría. It is noteworthy that Valverde had already collaborated twice with Hollywood when she was offered scenarios of American projects Broken Horses and Exodus: Gods and Kings.

Not much is known about the romantic affairs of the actress. When she in 2010 on the set of melodrama Three Steps Above Heaven met her film partner Mario Casas, then their love on the screen stepped into real life. María Valverde and Mario Casas began dating. In each interview, the woman shifted the conversation to her lover, calling him the best friend, a fantastic man, and a man without flaws.

All fans of the Spanish movie understood: the couple of Mario Casas and María Valverde's wedding is not far off. There were even rumors that María Valverde had given birth to a child by her future husband. Therefore, when in the fall of 2014, the actress announced that she and Mario broke up, the public such news has had a staggering effect. She does not want to comment on the situation and report on the reasons for the breakup, but she says that she still has respect for Casas, although she treats him as a stranger.

The couple were considered inseparable until 2014.

In addition, María, who calls herself an "emotional addict," admitted that she had not lost faith in love, but now the public will not know about her boyfriends, as it is easier for her to experience personal problems alone. So now María Valverde's personal life will be like a closed book.

Few of Valverde's fans know that she was born with a disease such as celiac disease, that is, her body can not stand the food containing gluten. She is sure that this allergy has made her as responsible and disciplined as she is now. In addition, because of her illness, the actress has learned to lead a healthy life, and now not only eats well but also does not drink or smoke.

María Valverde has a net worth of $6 million.