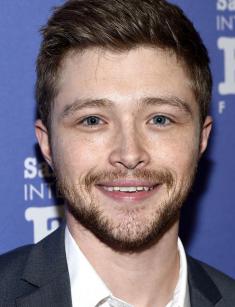 Sterling Knight’s career promises to be bright. The young man has many talents: he acts in movies, performs songs, and plays the guitar. Nylon Young Hollywood magazine has called the young actor the rising star.

Sterling Sandmann Knight was born in March 1989 in Houston, Texas. He became the eldest child in the family and had a brother Spencer and Scarlett. The boy realized he would become an actor at the age of ten and worked in this direction. However, the father was the only person who believed in his son’s artistic success.

As Sterling was making his dream come true, he learned how to play the guitar and sing. These skills proved to be useful later, when the young man performed the soundtracks for the movies where he acted.

Knight debuted on the school studio stage; further on, he participated in Lost in Yonkers; it was a story about a Jewish family living in New York during the Second World War. Sterling appeared in the play On Golden Pond about a father and a daughter whose relations improved thanks to a strange boy. Besides, the artist received a small role in the musical Bye Bye Birdie based on episodes of Elvis Presley’s life.

The lead role in the short movie Calm marked the beginning actor’s debut. Further on, he played secondary characters in the iconic series Grey’s Anatomy and the thriller The Closer.

Soon, Knight moved to Los Angeles to build his career and received the first notable part in the TV series Hannah Montana on Disney channel. Selena Gomez, Brooke Shields, and Mickey Rourke starred in the project as well.

The comedy 17 Again where Sterling personified Alex brought him much fame. Zac Efron and Matthew Perry played Alex’s father in his youth and as an adult correspondingly.

In 2010, the rising Hollywood star was nominated for Teen Choice Award and Hollywood Teen TV Awards for the lead role in the sitcom Sonny with a Chance. Knight got the role of a young man who viewed himself as the center of the universe; he fell in love with the main character but did not want to admit it.

When the lead actress Demi Lovato left the show, Knight stayed there, yet he said he had more fun with the singer. The spin-off So Random! was aired until the end of 2011. Simultaneously, the artist participated in the little-known comedy Monster Heroes about monsters living among people.

StarStruck proved to be one of the top-rated products by Disney channel. In this musical comedy, Sterling turned into the Hollywood celebrity and the favorite of women, the singer Christopher Wilde. The actor sang the song “Starstruck” in the movie; someone else’s phonogram was used in other cases.

Knight had an opportunity to perform more songs in Elle: A Modern Cinderella Tale. The actor had the same stage type: his character was a handsome, bright-eyed man with a charming smile.

Later on, the Disney favorite gained the lead role, Shane, in the thriller Transit. The actor personified the son of the main character (Jim Caviezel). As the story runs, Shane’s family receives a bag with millions of dollars without even knowing it: robbers put it into a car. Thus, ordinary camping transforms into a high-concept action movie.

Knight participated in the third season of Melissa & Joey as a guest star. It is a story about a former businessman’s adventures: after his firing, he works part-time as a babysitter for his boss’s children. Sterling played the boyfriend of the boss’s daughter.

In the 2015 thriller Landmine Goes Click, Knight played a person involved in a love triangle.

At some moment, the character steps on an old mine; as he is waiting for the inevitable blow, he confesses to his friend that he had had an affair with his fiancée. As it turns out, it was the fiancé who was aware of everything engineered the tragedy and tried to beat a confession out of Sterling’s character.

In 2016, the actor appeared in several projects: the comedy series Crowded by James Burrows, the drama It Snows All The Time, and the short movie Danny Boy.

In 2017, the actor participated in the movie Different Flowers about a young woman who leaves her fiancé right before the wedding and goes traveling to find the meaning of her life. Sterling played the unhappy man left by his girlfriend. The project was nominated for Independent Spirit Awards and won Kansas City FilmFest Awards – Best Narrative Feature.

Rumors have it the young actor used to date his colleague from Sonny with a Chance, Demi Lovato. The affair allegedly lasted for a year; the reasons for the breakup remained unknown. At the same time, some fans insisted that the actors were only friends. Knight starred in Demi’s music video “ La La Land”.

People also considered Stephanie Crews to be the man’s girlfriend after they were seen together in Las Vegas. An unconfirmed report said that Knight used to date Miley Cyrus’s cousin, Maddie, Danielle Campbell, and Jessica Bridgeman.

The dancer and actress Ayla Kell is often seen with Knight now. She appeared in the popular youth series Make It Or Break It and cooperated with Sterling in an episode of Melissa & Joey.

Judging by the artist’s Instagram photo, he spends his free time with friends, working out in a gym, or playing golf.

In 2017, Sterling joined the lead cast of the independent fantastic movie The Man from Earth: Holocene by Richard Schenkman. The movie was released in January 2018 in the United States and had a nomination for The Saturn Award – Best DVD/Blu-Ray Release.

Critics did not appreciate this movie much. Some of them expressed the opinion that it was useless to watch the sequel without having been familiar with the original. Some did not like the characters’ bulky conflicts; others criticized the unimpressive cast. The fact that the college students became the movie protagonists was named the biggest mistake.

Philip (Sterling Knight) bears some resemblance to a fundamental Christian; he says that Jesus is an immortal caveman. Some viewers are likely to see this character as the most troubled one.

According to critics, the final based on the personal confrontation between Philip and John Oldman turned from the sci-fi speculations to a poorly reasoned anti-religious insult. There were appeals to keep The Man from Earth away from sequels and save its initial purity.

At present Sterling Knight has a net worth of $2 million.