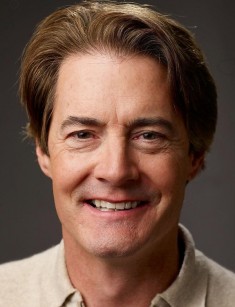 Millions of spectators know the actor Kyle MacLachlan for his role of the agent Cooper which the actor brilliantly performed in the cult series "Twin Peaks" directed by David Lynch and also in the full-length prequel "Twin Peaks: Fire Walk with Me". It's worth noting that the actor has the impressive list of the roles. Today, the master of transformations has 64 movies in his filmography.

Kyle MacLachlan was born on the 22nd of February, 1959 in a quiet town of Yakima (Washington State). The actor's father Kent Alan was a broker, and his mother Catherine was engaged in the household and education and upbringing of the children (the actor has younger brothers Craig and Kent Jr.). It was a sawmill close to their house. Since childhood, the head of the family introduced his eldest son to the manual labor. So, in three months of work, Kyle had learned to log, process wood and produce wooden doors.

In the conversations with the journalists the actor repeatedly said that when he was a child, his mother told that Johann Sebastian Bach was one of his distant ancestors. That’s why it’s not surprising that his parents sent him to music school even without asking his opinion about this. Here the future actor was playing the organ till the age of 18.

Then Kyle was visiting singing lessons for a couple of months. Nobody knows whether Kyle could become a great musician, but in 1977 his mother who had divorced by that time and was bringing up her sons alone advised her eldest son to become the actor.

During his school days, MacLachlan acted in amateur musicals and was somewhat successful in it. The young man took his mother’s advice and entered the University of Washington. In five years he graduated with honors and received Bachelor’s degree of Fine Arts. Despite his mother’s wishes and the diploma, after graduation, the actor planned to start the business. Fortunately, as a result, he had focused on the acting.

MacLachlan began his acting career at the stage of Seattle theater. During one of the theater festivals, the beginning director David Lynch noticed the young athletic brunette. He invited the young actor to play the leading role in his third full-length movie "Dune".

As a result, in 1984 the rising star presented himself before the audience in the impressing image of the alien with the shining lilac eyes. The character of the film was sitting on the enormous sandy worm. Actor's and director's cooperation turned out to be plentiful, and they formed the united creative duet.

In 1986 Lynch invited Kyle to participate in his new project - the thriller "Blue Velvet". MacLachlan became the star due to the role of young Jeffrey Beaumont who comes back to his native town because of his father's stroke. After his return to hometown, the hero becomes the participant of the chain of some strange events. In 1987 the actor performed in the horror movie "The Hidden", directed by Jack Sholder. Kyle transformed into the image of the eccentric FBI inspector - Lloyd Gallagher.

MacLachlan got national recognition and glory in 1990, after the premiere of the series "Twin Peaks" where he appeared together with Heather Graham and Mädchen Amick. This brilliantly performed role of FBI agent Cooper had overshadowed actor’s personality and became his second name. One more favorite actress of Lynch – Sherilyn Fenn also took part in the series.

In 1992 his fans saw their favorite hero in full-pledge continuation of the series "Twin Peaks: Fire Walk with Me". However, it is wrong to consider this picture a sequel to the series. Two hours of screen time narrated about the events which had happened before the plot of the series.

After the shootings, MacLachlan said goodbye to Lynch and next time they met only 25 years later. In 1992 the actor appeared in the series "Tales From the Crypt", and a year later he performed the leading role in the screen version of the novel "The Trial" written by Franz Kafka.

In 1994 the drama series "Against the Wall" was released. This time the actor played the role of the security guard of Attica prison. In this movie, he worked together with Samuel L. Jackson.

In his filmography, the actor has unsuccessful works as well. For example, for his role in the exciting movie "Showgirls" (1995) the star of "Twin Peaks" was nominated for the Golden Raspberry anti-award.

Later, the agent Cooper also took part in other popular series. In "Sex and the City" he transformed into the husband of Charlotte York, in "Law & Order" he acted as a psychotherapist who shot the sociopath who had killed his son; and in "Desperate Housewives" he performed the role of the mysterious dentist Orson Hodge.

The personal life of the charming actor always interested both his admirers and the press. It's known that on the movie set of "Twin Peaks" the actor got a fancy for the actress Lara Flynn Boyle and they had relations for a couple of years. However, as a result, the passions and feelings had passed, and the couple broke up.

Later, during the shootings in the commercials, Kyle got acquainted with the model Linda Evangelista. The young lady left her spouse for the actor, and in 1996 the lovers announced their engagement. After seven years of relations and unsuccessful attempts to have children, Linda ran away from him to the French football player Fabien Barthez.

The charismatic brunette met the woman of his life in summer of 1999. At that time the fate brought him together with the journalist Desiree Gruber. In 2002 the master of transformations married this woman, and six years later his wife gave birth to their son Callum Lyon.

At present their united family lives on Manhattan. By the words of MacLachlan, he has done all the repairs and improvements in the house with his own hands. Minimalism is their apartment's design. There is news that MacLachlan family has two dogs in their home.

In the continuation of "Twin Peaks" Kyle again transformed into the agent Dale Cooper who became a favorite character for many spectators. The role of Sheriff Truman which was earlier performed by Michael Ontkean, in the third season belonged to Robert Forrest who in the nineties refused the shootings because of his engagement in other projects.

It’s known that the authors of the series have taken all possible measures so that the information concerning the plot of the series won't appear on the web before the premiere day. For this purpose, all the actors received only their remarks, and after the shootings of the episode, the sheets with the phrases, dialogues, and monologues were burnt.

According to the plot, the actions of the series take place 25 years later after the agent Cooper had got to the trap of the Black Lodge. In the first episode of the new season, some particularly violent murders take place.

For example, the maniac tears the guy and the girl in bloody pieces in the best traditions of youth slashers, and the calm librarian Ruth Davenport is found with the broken left eye and cut-off head. Moreover, the body with the woman's head doesn't belong to her.

At that time the dark double of the agent Cooper who has long hair and bad taste in clothes treats people as expendable and shoots them for the head without the slightest hesitation.

The particular absurdity of David Lynch’s humor at the very least helps to cope with that flood of gloom and hopelessness which strikes the viewers during the series. Moreover, the director promised that the fans of the previous "Twin Peaks" would be utterly delighted with the new season which was intended to finish the story of this American town.

In 2018 MacLachlan’s admirers would see their icon in the movie "The House with a Clock in Its Walls " shot by the novel of John Bellairs. In the center of the plot is the orphan Lewis who moved to the house of his uncle in which earlier there had lived an angry and powerful sorcerer Isaac.

The wizard invented and hid in the mansion the magic clock counting the time before the doomsday. Young Lewis is going to get acquainted with the world of magic and to save the world from the catastrophe.

Despite his busy working schedule, the actor who is 183 cm tall doesn't forget about his admirers. Kyle regularly posts on Instagram his pictures from the film shows and also some clips from his holidays.

It's worth noting that social networks are not the only source which can tell the fans about the latest news from MacLachlan's life. Information connected with the creative biography of the Hollywood star is also often published in printing editions and on the web portals. 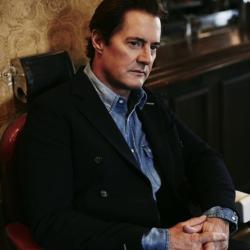