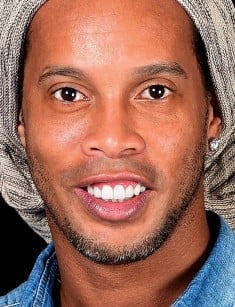 Ronaldinho is one of the greatest soccer players; Pelé, Maradona, and Kaká called him the best in the world, the true champion, incredible talent with remarkable technical abilities, excellent playmaker, and wonderful organizer. They were absolutely right.

Ronaldo was born on March 21, 1980, into the family of a shipyard worker João de Assis Moreira and a nurse Miguelina Elói Assis dos Santos. The boy was the third child in the family. Twenty years later, the soccer and near-sports world knew him as Ronaldinho.

The family lived in Brazil, one of the largest cities, Porto Alegre. The father worked part-time at a parking lot of the soccer club Grêmio, the winner of the Intercontinental Cup and two-time winner of Copa Libertadores. Small wonder the man’s sons adored soccer and its varieties: futsal and beach soccer. More than that, Brazilians have a tradition to give a soccer ball as a gift for the first birthday.

Ronaldinho followed his elder brother Roberto who was a promising forward in Grêmio and participated in the FIFA U-17 World Cup in 1987. The club presented him a villa in a prestigious neighborhood to motivate Roberto, yet the young man’s knee injury brought his soccer career to an end.

Ronaldinho got his nickname translated as “small Ronaldo” at the soccer academy which he joined at 7. When the boy was 13, the Brazilian media began to write about the young talent: his futsal team Belo Horizonte won a match with the recording score 23:0; Ronaldinho was the one who scored all the goals.

Ronaldinho started his career in Grêmio: the teenager joined it at 15. He signed his first professional contract and participated in the U-17 World Championship in 1997.

Two years later, Ronaldinho debuted in the national team. As he performed brilliantly in the FIFA Confederations Cup, European clubs took an interest in the player. His life changed dramatically when he transferred to the French club Paris Saint-Germain: according to the Pelé Law, a sportsman could join another club on condition the compensation 200 times higher than a player’s salary was paid. In 2001, the contract with Grêmio expired, and Ronaldinho was not going to extend it.

At that time, PSG was seen as an average club and a mere start for Ronaldinho. After Paris Saint-Germain took the 11th position in the country’s championship and lost in Coupe de la Ligue, the athlete left the team.

Marcelona did not hesitate to buy the player - Barcelona. Manchester United and Real Madrid were also eager to get Ronaldinho. The team of Joan Laporta, the President of Barcelona, contacted Ronaldinho and his brother personally; their phone negotiations resulted in the €32-million contract.

Ronaldinho became the club star: from the first seasons, he demonstrated spotless playing, beautiful goals, and unique feints. Elastico, also known as flip-flap and snake, is the most famous trick of the Brazilian.

The sportsman said his playing was improvisation: no attack was possible otherwise, especially when there were only seconds to make a decision. A soccer player should not demonstrate the same playing style: unpredictability was necessary to unbalance opponents.

The sportsman’s cost was growing exponentially. In 2006-2007, Chelsea offered €70 million for his transfer, but the Catalonian club rejected the offer.

In 2007, Ronaldinho became a Spanish citizen. At the same period, the future soccer legend Lionel Messi joined the main team of Barcelona. As the Argentinian sportsman said, Ronaldinho was his example to follow.

Because of the mediocre performance in the FIFA World Cup in Germany and the 2008 Olympic Games, the serious trauma, and losing the position in the team made Ronaldinho look for a new club.

Many teams wanted to see Ronaldinho as their member. In 2008-2011, the athlete played in Milan, although Manchester City’s offer was better: Ronaldinho was just reluctant to go to England.

The first Italian season was challenging: the language, people, and the environment were new. In one of his interviews, Ronaldinho mentioned he had to prove himself to be a worthy first-eleven player.

The golden period of Ronaldinho’s career was over. He had conflicts with the coaching administration and violated his regime in nightclubs. As a result, the quality of his playing decreased, and his performances were abrupt. The press reported on his behavior out of sports grounds rather than described his soccer style.

The contract costs were lowering, and the sportsman changed clubs. In 2011, he transferred to Flamengo; Atlético Mineiro followed the next year. In 2014, Ronaldinho signed a year contract with the Mexican club Querétaro. Later on, the player joined Cienciano (Peru) and the Ecuadorian Barcelona (Guayaquil) and came back to Brazil to Fluminense de Feira where he played only a few months in 2015.

When Ronaldinho was a PSG member, he said he had never fallen in love and suffered from an unhappy romance. He added he preferred intelligent girls with a sense of humor.

Ronaldinho is not married officially, but he has a son born in 2005 and named after Ronaldinho’s father. The boy’s mother is a dancer Janaina Nattielle Viana Mendes.

Ronaldinho himself calls a soccer ball his first love.

Later, the French model Alexandra Paressant and the Romanian Liliana Cheveresan were seen with the sportsman. The relationship with the former woman seemed to be serious: Ronaldinho invited her to his mother and showered her with expensive gifts. Once, he even sent a plane for his girlfriend’s dog. However, Alexandra was too open with the media. Liliana preferred to build her career.

Ronaldinho took care of the relatives: his brother Roberto is his personal agent, and his sister Deisi is the PR manager.

The man does not expose his family life. On his official Instagram page, the majority of posts are the pictures from games, fan and friend meetings, and the photos of the sportsman.

Ronaldinho has not been employed as a soccer player and continues to work on charity matches and ads. In summer 2016, the athlete presented his mobile app “Emojinho” for Android and iOS.

The same year, Barcelona was promoting its brand in the USA and opened a new office and soccer school in New York. Ronaldinho became the official ambassador of Barça in America.

In 2016, Ronaldinho, the Hollywood stars Jean-Claude Van Damme, Christopher Lambert, and the boxer Mike Tyson appeared in the movie Kickboxer: Retaliation. It was not the first time Ronaldinho starred on the screen: in 2002, he had a cameo role in Shooting Stars, and he also took part in The Clone, Brazil Avenue, and Reservoir Dogs.

In 2017, two pieces of news spread. According to the agent Roberto de Assis, Ronaldinho was going to come back to the professional soccer and sign a contract with a team which would participate in Copa Libertadores; the Uruguayan team Nacional was named as the most probable candidate.

According to Globoesporte, the ex-forward was considered as the member of the Brazil national futsal team. The conditions of the cooperation with Sorocaba where the legendary futsal Falcao played were discussed. Before that, Ronaldinho used to take part in the Indian futsal league and left when he was offered to become a Goodwill Ambassador at the 2016 Summer Paralympics in Rio de Janeiro. 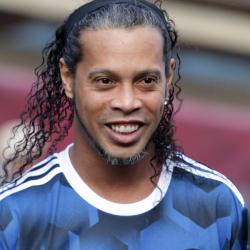