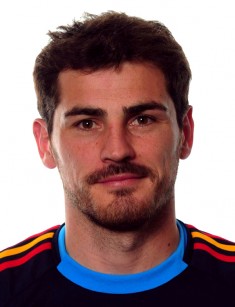 Iker Casillas is one of the best goalkeepers in the entire history of soccer. He is the former captain of the Spanish national team, European Championship two-time winner, and La Liga five-time winner (in Real Madrid). Together with Real, he won two Copa del Rey prizes and four Supercopa de España awards. Casillas is the three-time UEFA Champions League winner and six-time member of the UEFA symbolic team of the year.

This is not a complete list of the sportsman’s achievements: there are numerous titles and awards. Besides, he is one of the top three sexiest soccer players in the world, so there are many women among his fans.

Iker Casillas was born on May 20, 1981, in Móstoles, Spain. The mother María del Carmen Fernández González worked as a hairdresser; the father José Luis Casillas was a civil servant in the Ministry of Education. The family was not engaged in soccer: none of the relatives played soccer professionally. However, the father came from Bilbao and supported Atletico.

Móstoles is a provincial town not far from Madrid. People belonging to the working class live there. Iker and his friends often went to the neighboring park to play soccer; sometimes, teams from different districts played against each other. The boys even had their own Champions League finals. Besides, the boy frequently visited matches with Real at the Santiago Bernabéu Stadium. Later, Iker remembered these pictures as the brightest moments of his childhood.

The boy was interested in everything related to soccer, but goalkeepers’ actions fascinated him particularly. Francisco Buyo, Santiago Cañizares, and Peter Schmeichel were Casillas’s icons. Once, the club Real Madrid had the open day at the school not far from the boy’s house. The father took Iker there. Coaches liked the eight-year-old goalkeeper, but he was too young. In six months, Casillas had another attempt and got accepted. Since that moment, Iker Casillas’s career in the big soccer started. Iker joined the youth team trained by the coach Vicente del Bosque.

Iker played in the youth team until 1999. He won the World Cup in U-15, U-16, and U-21 age groups and the UEFA–CAF Meridian Cup. In 1999, he proved himself in the first eleven of Real when the team won the victory over Valencia in the UEFA Champions League final game: Iker stepped in for the injured goalkeeper Bodo Illgner. Later on, César Sánchez replaced Iker, and the sportsman played for Real Madrid С and Real Madrid Castilla. In 2000, he came back to the major team.

After the 2001-2002 UEFA Champions League final game (Real Madrid - Bayer 04 Leverkusen, 2:1), Casillas became the primary goalkeeper of the team. He had the excellent physics: his height was 181 cm., and his weight was 84 kg. In the next season, the young goalkeeper had 38 games and helped the team become La Liga winner. He also took part in 15 Champions League games. In 2014, Casillas and Real won the Champions League for the third time; before that, in 2013, Carlo Ancelotti replaced José Mourinho and became the head coach.

Casillas’s relations with Mourinho were complicated. For ten years, Iker had been the first goalkeeper of the club, but he had to stay in reserve in December 2012 in the game with Málaga. Antonio Adán appeared on the field as the goalkeeper. This decision provoked much resentment among fans; the scandal in the press and close-to-soccer world followed.

Mourinho insisted it was the coach’s technical decision since Adán was a better player and there were considerable problems in the team that failed to operate appropriately in the defense. The conflict between the player and the coach was escalating. In the course of time, Mourinho replaced Antonio Adán with Diego López; Casillas remained on the bench.

As soon as Carlo Ancelotti became the head coach, the captain did not appear on the field at once. In the 2013-2014 season, Iker played only as the cup goalkeeper. In the next season, the coach trusted Casillas enough to give him 90% games in the first eleven.

In July 2014, Arsenal offered the player to transfer. The goalkeeper commented on this offer categorically and said that there was no better club in the world than Real.

In 2015, the goalkeeper also commented on his leaving:

“I knew that my time at Real Madrid was coming to an end in January or February 2015. The atmosphere was not good. I thought about making a decision. We thought hard about what to do, and the best thing was to leave Real Madrid. I think it was the [right] moment. I had thought about leaving Madrid after winning the Champions League in 2014.”

At the Euro 2000, Iker Casillas debuted in the national team as the reserve player. He replaced the injured Santiago Cañizares at the World Cup in Japan and Korea. The game with the Paraguayan national team was a success. The penalty helped the Spanish defeat the Irish team and go further.

At the Euro-2004, the goalkeeper had eight matches in the first eleven. In 2008, the Spanish guided by the captain Iker Casillas won the European Championship. In 2010, the team became the champion again. FIFA called Casillas the best goalkeeper of the tournament.

The player’s bosom friends Sergio Ramos and Xavi played with him for the Spanish national team. While Sergio was the Real defender, Xavi and Iker used to be opponents since Xavi was the Barcelona star.

At the end of July 2016, Casillas posted the fragment of the movie “Rambo: First Blood Part II” on his Twitter page: Rambo rejected the offer to stay in the army. Iker wrote:

“Proud to feel the love and support of all of you through #GraciasCasillas, with La Roja today and forever.”

Thus, the goalkeeper announced he finished his career in the Spanish national team. At Euro-2016, Iker did not play at all; David de Gea replaced him. Players and Iker Casillas’s fans thanked the goalkeeper and showed their love. The hashtag “thankyouCasillas” became popular on Twitter.

However, there were some evil tongues as well. The Espanyol goalkeeper Diego López noted in his October interview he was not surprised Casillas was not included in the national team. He added that all players had to compete under the same circumstances, and the competition was harsh among the team members.

In July 2015, the Real administration officially announced Casillas transferred to the Portuguese Porto.

As Casillas joined the team, he missed 23 goals in 26 matches. Porto left the Champions League since it lost in games with Chelsea, Dinamo Kiev, and Maccabi Tel Aviv.

At the 1/16 Europa League match, the team lost to Borussia Dortmund. After that, the Porto President Jorge Pinto da Costa commented on the contract with Casillas and said that it was a big mistake because the sportsman did not meet the expectations. The club could not allow his salary, so Casillas’s transfer to the US would be the best option.

On March 15, 2017, after the 1/8 Champions League game with Juventus (0:1), the 35-year-old Porto goalkeeper Iker Casillas said he liked working in the Portuguese club, and he would gladly stay there.

Before Iker met his future wife, the player was dating Eva González, Miss Spain 2003. Rumors had it the couple split up because of the young woman’s work: she had signed the agreement and advertised goods for women which provoked offensive chants and biting words to the sportsman.

When the game went wrong, female hygiene products were thrown at Iker. It was funny for everyone except for the player. The couple broke up without scandals. The woman remembers the goalkeeper warmly: although their story ended, they had words of gratitude to each other.

After the relationship with Eva, Casillas was seeing another model Adriana Artines, but it did not last long.

It was probably their destiny: the popular and beautiful sports reporter Sara Carbonero and the world’s soccer star admired by women Iker Casillas were to meet. Before Iker, Sara was called the sly heartbreaker and social climber. To some extent, the woman did climb the social ladder due to her affairs. At first, she was dating the radio station Marca journalist David Sánchez; later, she had the relationship with another journalist who allegedly helped her get hired on the Spanish sports channel LaSexta.

Carbonero and Casillas met at the FIFA Confederations Cup in South Africa. Sara interviewed the team after the game. At that time, Spain lost in the semi-final match to the American team – nobody could expect that. The journalist addressed the goalkeeper some unpleasant words, and he talked back and left before the end of the interview.

After the interview, the sportsman could not forget the green-eyed brunette. He decided to make amends and send flowers to Sara. The reporter did not accept the apology. Casillas was persistent: he was sending flowers over and over again. Finally, the beauty’s heart melted.

The relationship developed quickly. The media were full of rumors about the lovers. Casillas was even accused of spending too much time with his girlfriend so that his attention wavered during games. At the FIFA World Cup 2010, he missed a goal when the national team played against Switzerland because he was looking at Sara.

The couple announced their relationship when Carbonero interviewed Iker: after the Spanish team won the FIFA World Cup 2010, the goalkeeper kissed the young woman live on television.

In January 2014, Carbonero gave birth to the first child Martin. In June 2016, the second son Lucas was born in the Ruber International Hospital in Madrid.

People had been waiting for six years when the most beautiful Spanish couple would marry. There were many rumors about the wedding ceremony, and the press discussed the present that Casillas allegedly gave to his wife: the five-bedroom house that cost €2.6 million. The ceremony took place on March 20, 2016, in secret. Only one guest, their two-year-old son, was present.

According to the latest news, Iker Casillas is going to join the Spanish national team again. In April 2017, the player said he felt he deserved to play for his country.

In 2017, Iker became the champion on the number of Champions League matches (168 games). Before him, the former Milan defender Paolo Maldini held this position.

Nowadays, Iker Casillas and Sara Carbonero bring up two children. The star couple is popular in Spain and the press: reporters follow each step of Casillas and Carbonero. 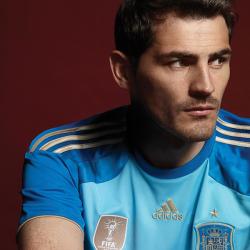