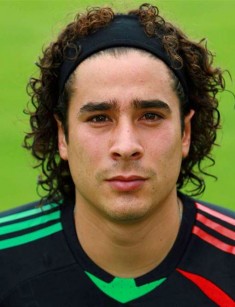 Mexican footballer, Guillermo Ochoa, is a symbol of the 2014 World Cup in Brazil. According to Luiz Felipe Scolari, the goalkeeper was really amazing in saving the gates of the national team. The goalkeeper became the first representative of his nationality among the applicants for the "Golden Ball" and the "face" of the game football simulator.

Francisco Guillermo Ochoa Magaña was born in Guadalajara, on July 1985. The footballer's favorite number is 13, the date of his birth.

In early childhood, the boy moved to Mexico City. In his free time, he played football and helped his family at the bakery. When there was nobody to play in the courtyard, he asked his sister to pass balls in the apartment, standing in the doorway.

The father sent Guillermo to the football academy of the eponymous capital club. Friends cut the guy's name to Memo.

At first, Ochoa attacked the opponent from the middle of the field, but one day the goalkeeper did not come to the training, and the attacker replaced him. It was the best place for Guillermo.

Ochoa began his sports career in the "America" club. The Dutch coach, Leo Beenhakker, gave him the opportunity to play in the main team.

The coach asked not Edgar Hernandez but the young Guillermo to replace the injured Adolfo Rios. He phoned the goalkeeper at night. And Ochoa said that he always wanted to play for his national team.

In 2005, the footballer won the first title - the winner of the second stage of the championship of Mexico-Clausura. Two years later, the magazine "France Football" included Ochoa in the list of 50 applicants for the "Golden Ball."

When Memo was 22 years old, the world's most famous football clubs Bayern, Manchester United, Arsenal became interested in Ochoa. The transfer cost of the goalkeeper, who is not even part of the national team of Mexico, was estimated at € 7 million. However, Ochoa did not receive any proposals. The footballer did not want to move to another continent, enjoying the glory in his country.

Later, they will say that the goalkeeper missed the chance to become the world star like Keylor Navas or Carlos Kameni. The Mexican should have analyzed the clubs more carefully, to compare the opportunities, and not to agree for secondary roles.

Among the fans, there was a legend that he didn’t go to Europe because of polydactyly. Allegedly, Guillermo has six fingers on his hand. People told that this "defect" and not only because of his high growth of 183 cm (weight Ochoa - 78 kg) and the excellent vision of the game situation, helped him to be a good goalkeeper.

Memo wanted development his professional skills. There was an offer from "Fulham FC." The football player even spent a few training sessions with the team. But in 2011, a doping scandal broke out. Clenbuterol was found in the body of Ochoa. The English club decided not to sign a contract to avoid problems. Later, but then he received an offer from the French "Ajaccio."

Guillermo became a star in "Ajaccio." He saved the gate of the club for two seasons. The French recognized the Mexican as the best player of the club and considered the offer of € 7 million from the Italian "Inter" rather modest. The managers insisted on 10 million. As a result, Memo got the status of a free player.

At the World Cup-2014, unlike the championships of 2006 and 2010, Ochoa finally came to the gate of the national team and had one of the best matches in his career. In the meeting with the Brazilian national team, which took the 4th place, the goalkeeper of the Mexican national team defended to zero.

"Atletico," "Malaga" and "Lance" became interested in the famous footballer after the World Cup 2014. Memo decided to choose from the first two clubs. But "Lance" offered the goalkeeper not very big salary.

In summer 2014, Ochoa moved to "Malaga," but in the club, he had very few appearances. Carlos Kameni saw Javi García as a goalkeeper. But the football player decided that "it is necessary to fight with the obstacles that arise throughout the career. Football often puts you in difficult situations, but you need to continue to work and move on. "

Ochoa played only 11 matches for the club.

In 2016, the goalkeeper loaned to another team of La Liga - "Granada." The season turned out to be the worst in Memo's career - in 40 games the goalkeeper missed 83 goals. On the other hand, Ochoa was the goalkeeper with the most saves across the top five leagues in Europe with 152 and was awarded the title of the most valuable player of the Premier League.

At the end of the 2016-2017 season, Ochoa moved to Belgium and got to one of the most titled clubs of the country "Standard." In the new team, the football player took the lucky 8th number, explaining that the name Ochoa in Spanish means "eight."

Guillermo’s wife is a designer and model Karla Mora. The girl is the most devoted fan of the goalkeeper and admires him regardless of the results of the matches.

Ochoa and his wife did not think long choosing the names of their children. They called the son Luciano and the daughter - Lucciana. Memo wrote the name of the girl on football boots.

The football player once answered the journalists that he would not change the smell of the sea for anything. Living alone, Ochoa got used to the dusty Mexico City, but for the family he would prefer romantic landscapes.

For the goalkeeper of the Mexican national team, the FIFA World Cup 2018 became the fourth in his career. At the championship, Ochoa has already set a personal record. He became the second goalkeeper in the history of the World Cup, who defended to zero in the matches against Brazil and Germany.

Only Jan Tomaszewski, the goalkeeper of the Polish team in 1974 and 1978 championships, achieved such results.

Guillermo noted the excellent organization of the championship and said that he hopes to stay there till the last day of the competition. 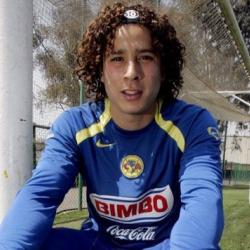