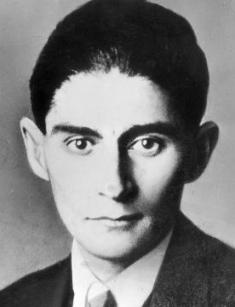 The biography of Franz Kafka was not full of events that attract the attention of writers of the current generation. The great writer lived a rather monotonous and short life. At the same time, Franz was a strange and mysterious figure, and many of the mysteries of this extraordinary author excite the minds of readers to this day. Although Kafka's books are a great literary legacy, during his lifetime, the writer did not receive recognition and fame and did not learn what a real triumph is.

Shortly before his death, Franz left his best friend, journalist Max Brod, a task to burn his manuscripts, but Brod, knowing that in the future, every word of Kafka would be valued more than gold, disobeyed the last will of the friend. Thanks to Max, Franz's creations saw the light and had a massive impact on the literature of the XX century. Kafka's works, such as Der Process (The Trial), "Die Verwandlung" ("The Metamorphosis"), Das Schloss (The Castle) are mandatory for reading in higher educational institutions.

The future writer was born as the first child in the family on July 3, 1883, in the critical economic and cultural center of the multinational Austro-Hungarian Empire – the city of Prague (now the Czech Republic). At that time, the Empire was inhabited by Jews, Czechs, and Germans, who, living side by side, could not coexist peacefully with each other, so in the cities, there was a gloomy atmosphere and sometimes even anti-Semitic moods. Kafka did not care about political issues and ethnic fights, but the future writer felt thrown on the sidelines of life. Social phenomena and incipient xenophobia had left their mark on his character and consciousness.

His parents' upbringing also influenced Franz's personality: as a child, he did not receive his father's love and felt like a burden in the house. Franz grew up and was raised in a small Josef district in a German-speaking family of Jewish origin. The writer's father, Hermann Kafka, was a middle-class merchant who sold clothing and other goods at retail. The writer's mother, Julie Kafka, came from a noble family of the prosperous brewer Jacob Levy and was a highly educated young lady.

Franz also had three sisters (two younger brothers died in early childhood before reaching the age of two). While the head of the family was busy in the clothing shop, and Julie watched the girls, young Kafka was left to himself. Then, to dilute the gray canvas of life with bright colors, Franz began to invent small stories, which, however, no one was interested in. The head of the family influenced the formation of literary lines and the character of the future writer. Compared to the six-foot-tall man, who also had a bass voice, Franz felt like an underdog. This feeling of physical inferiority haunted Kafka throughout his life.

Kafka senior saw his son as the heir to the business, but the closed, shy boy did not meet the requirements of his father. Hermann used harsh methods of education. In a letter written to his parent, which did not reach the addressee, Franz recalled how, at night, he was exposed to a cold and dark balcony because he asked for water. This childish resentment aroused a sense of injustice in the writer:

"Years later, I still suffered from the painful idea of how a huge man, my father, the highest authority, almost without any reason, at night could come to me, pull me out of bed and carry me out on the balcony, that meant what a jerk I was to him," Kafka shared his memories.

From 1889 to 1893, the future writer studied in elementary school, then entered the gymnasium. As a student, the young man participated in University activities and organized theatrical performances. After receiving his matriculation certificate, Franz was admitted to the Charles University's faculty of law. In 1906 Kafka received his doctorate in law. The head of the scientific work of the writer was Alfred Weber himself-a German sociologist and economist.

Franz Kafka considered literary activity the main goal in life, although he was considered a high-ranking official in the Insurance Department. Due to illness, Kafka retired early. The author of the Der Process was a hard worker and highly appreciated by his superiors, but Franz hated this position and spoke unflatteringly about the leaders and subordinates. Kafka wrote for himself and believed that literature justified his existence and helped to escape from the harsh realities of life. Franz was in no hurry to publish works because he felt incompetent.

Max Brod, whom the writer met at a meeting of the student club dedicated tp Nietzsche, collected all his manuscripts. Brod insisted that Kafka print his stories, and in the end, the creator gave up: in 1913, the collection Contemplation (Betrachtung) was published. Critics spoke of Kafka as an innovator, but the self-critical master of the pen was dissatisfied with his work, which he considered a necessary element of being. Also, during the life of Franz, readers were acquainted with only a small part of his works: many of Kafka's significant novels and short stories were published only after his death.

In the fall of 1910, Kafka went to Paris with Brod. But after nine days due to acute abdominal pain, the writer left the country of Cézanne. At that time, Franz began writing his first novel, The Man Who Disappeared, which was later renamed America. Kafka wrote most of his works in German. If we turn to his manuscripts, almost everywhere, there is official language without pretentious turns and other literary delights. But this dullness and triviality are combined with absurdity and mysterious singularity. Much of the master's work is imbued from cover to cover with fear of the outside world and the Doomsday.

This feeling of anxiety and despair is transmitted to the reader. But Franz was also a subtle psychologist, or rather, this talented man scrupulously described the reality of this world without sentimental embellishments, but with impeccable metaphorical turns. It is worth remembering the novella "Die Verwandlung" ("The Metamorphosis"), which was adapted into a Russian movie in 2002, which starred Yevgeny Mironov.

The story revolves around Gregor Samsa, a typical young man who works as a salesman and supports his sister and parents financially. But the irreparable happened: one beautiful morning, Gregor turned into an enormous insect. Thus, the protagonist became an outcast, from whom family and friends turned away. They did not pay attention to the beautiful inner world of the character, they worried about the terrible appearance of the awful creature and unbearable torments to which he unconsciously doomed them (for example, he could not earn money, clean the room himself and frightened guests).

But while preparing for publication (which never happened due to disagreements with the editor), Kafka delivered an ultimatum. The writer insisted that there should be no insect illustrations on the cover of the book. Hence, there are many interpretations of this story - from physical illness to mental disorders. Following his manner, Kafka did not reveal the events before the metamorphosis but made the reader dive deep into the novel from the first page.

The book Der Process is another significant work of the writer, published after his death. It is noteworthy that this work was created at a time when the writer broke off his engagement with Felice Bauer and felt like a defendant who owes everyone something. And Franz compared the last conversation with the beloved and her sister to the Tribunal. This work with a non-linear narrative can be considered unfinished.

Initially, Kafka worked on the manuscript continuously and wrote short fragments of "The Trial" in a notebook, where he wrote down other stories. From this notebook, Franz often tore out the sheets, so it was almost impossible to restore the plot of the novel. Besides, in 1914, Kafka admitted that he had a creative crisis, so he stopped his work on the book. The protagonist of the "The Trial" - Joseph K. (it is noteworthy that instead of a full name, the author gives his characters his initials) - wakes up in the morning and learns that he has been arrested. However, the real reason for the arrest is unknown; this fact condemns the character to suffering and torment.

Franz Kafka was picky about his appearance. For example, before leaving for University, the young writer could stand in front of a mirror for hours, carefully examining his face and combing his hair. In order not to be "humiliated and insulted," Franz, who always considered himself a black sheep, dressed according to the latest fashion trends. Kafka impressed his contemporaries as a decent, intelligent, and calm man. It is also known that the fragile and thin writer kept himself in shape and, as a student, was fond of sports.

But he couldn't build a healthy relationship with a woman, although Kafka was not deprived of the attention of lovely ladies. The thing is that the writer remained in the dark about intimacy with girls for a long time until his friends forcibly brought him to the local "lupanarium" – the red light district. Having experienced sexual pleasures, Franz, instead of delight, experienced only disgust.

The writer adhered to the line of ascetic behavior and, like Gogol, ran away from marriage, as if afraid of serious relationships and family responsibilities. For example, the writer broke off the engagement with Fraulein Felice Bauer twice. Kafka often described this girl in his letters and diaries, but the image that appears in the minds of readers is not right. Among other things, the famous writer had an affair with a journalist and translator, Milena Jesenská.

Kafka was followed continuously by chronic diseases, but it is not known whether they were psychosomatic. Franz suffered from intestinal obstruction, frequent headaches, and lack of sleep. But the writer did not give up and tried to cope with health problems by changing his lifestyle: Kafka followed a balanced diet, decided not to eat meat, played sports, and drank fresh milk. However, all attempts to get healthy were in vain.

In August 1917, doctors diagnosed Franz Kafka with a terrible disease – tuberculosis. In 1923, the author left his homeland (he went to Berlin) with a certain Dora Diamant and wanted to concentrate on writing. But at that time, Kafka's health only worsened: the pain in his throat became unbearable, and the writer could not eat. In the summer of 1924, the great author of the works died in the hospital.

It is possible that the cause of death was exhaustion. Franz's grave is located in the New Jewish cemetery: Kafka's body was transported from Germany to Prague. In memory of the writer, more than one documentary film was shot, monuments (for example, the head of Franz Kafka in Prague) were installed, and a museum was found. Also, Kafka's work had a significant impact on the writers of the following years.

"It is much easier to oppress your neighbor if you know anything about him. And you don't get the pangs of conscience..."

"Since it couldn't get any worse, it got better."

"Form is not an expression of content, but only a lure, a gate, and a path to content. If it has an effect, then the hidden background opens."