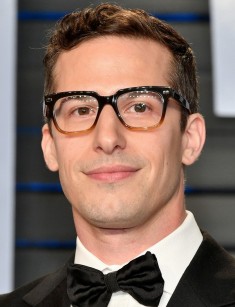 Since childhood, Andy Samberg has two passions - cinema and music. But for an actor and a musician, it is not enough to sing and act - it is necessary to make the final product cheerful and funny.

Andrew David Samberg was born in Berkeley, California in August 1978, in the family of a teacher and photographer. Andy has two sisters Darrow and Johanna. Since childhood, Andy loved the TV show "Saturday Night Live" and dreamed of participating in it.

After school, Samberg entered the University of California in Santa Cruz and then was transferred to New York University's Tisch School of the Arts.

In Berkeley High School, Andy along with his friends, Akiva Schaffer and Jorma Taccone, created a comedian trio The Lonely Island. The guys published their songs and funny parody videos on the Internet. After that they became famous.

In 2005, Samberg’s childhood dream came true. He started working on Saturday Night Live. A series "Lazy Sunday," where Andy played on the same stage with Chris Parnell made him popular. He also sang a song "Dick in a Box" in a duet with Justin Timberlake.

The Youtube video for the song "Jizz in My Pants" collected more than 110 million views. The song "I'm on a Boat", which The Lonely Island sang along with rapper Ty Payne, was also successful. In 2011, the trio along with Nicki Minaj introduced their song "The Creep.” Later, Samberg starred in the film "Friends with privileges" along with Justin, Mila Kunis, Woody Harrelson, and Richard Jenkins. Shortly before the end of the contract with SNL, the actor starred along with Nicolas Cage. The directors found that Samberg looks like Cage thanks to the hair and the same height and weight (Andy is 177 cm and 89 kg).

The video, which became a meme, was then given as an example on forums when discussing a mobile application FakeApp. With the help of this technology, it was possible to "rejuvenate" Carrie Fisher for the role of Princess Leia in the spin-off “Rogue One: A Star Wars Story.”

Andy began his career in the cinema as a director, screenwriter, and producer in such films as "Regarding Ardy" and "White Power." The members of The Lonely Island played the main roles. In the comedy "Hot Rod," Samberg played the role of a guy who believed that he was the son of a famous stuntman who died while performing a trick. It was difficult for Rod to become a professional, but he didn’t give up.

The singer got the role of a cameo in the romantic film Nick & Norah's Infinite Playlist" and in the series "30 Rock" along with Alec Baldwin, Salma Hayek, and Matt Damon. The Hollywood star voices such heroes of the cartoons as Antichrist in "American Dad!", chimpanzee Ham in "Space Chimps," the representative of humanity Jonathan in "Hotel Transylvania."

In 2009, Andy played the main character's brother in the comedy "I Love You, Man." Peter (Paul Rudd) asked Samberg to find a best man for his wedding. And he found Sidney (Jason Segel). Their meeting takes an unfortunate turn.

The film collected more than $ 90 million. The film by John Hamburg won BMI Film & TV Awards, nominated for the Teen Choice Awards and the Golden Schmoes Awards. In Russia, the comedy was demonstrated under the motto "I am looking for a friend. Gays, please do not worry me."

In September 2013, the film "Brooklyn Nine-Nine" was released. The producers of the series showed the hard work of policemen with humor. Samberg got the role of an unlucky cop who cannot be serious even on a mission.

His colleague and girlfriend Emily (Melissa Fumero) supports him. Andy also appeared in the episode of the series "New Girl," where he played along with Zooey Deschanel in the title role, as well as with another Brooklyn detective Charles Boyle (Joe Lo Truglio).

In 2014, for the role of a guardian, Andy Samberg won the Golden Globe, the American Comedy Awards and the People's Choice Awards.

Samberg used his comedy talent not only in films but also at official events. Andy was the host of the annual MTV Movie Awards 2009. In 2015 he sang and joked before the guests at the Emmy Awards, where Peter Dinklage, Julia Louis-Dreyfus, Viola Davis, and Tony Hale won the awards.

During the New Year holidays 2018, the humorist was invited to announce the winners of the Golden Globe. Dakota Johnson helped Samberg to open envelopes. The host of the ceremony was Seth Meyers.

The actor met his wife Joanna Newsom in 2008 through mutual friends. They celebrated the wedding in September 2013, at the Post Ranch Inn, in Big Sur, California.

In an interview with Larry King, the wife told that she is the most loved person in the world. Joanna is ready to "hang out" with him at any time and in any place. Joanna is a singer and musician. She also starred in the comedy "Popstar: Never Stop Never Stopping."

In August 2017, Andy became a father. The couple until the last day kept a secret the birth of their daughter. The name of the baby is a secret. The actor’s "Instagram" also doesn’t clarify the details. Samberg jokes:

"With this new project - a child - we sleep very little, but the feelings are wonderful."

Samberg played a secondary role in the drama "Brigsby Bear." The producers of the film are the members of the band "The Lonely Island." BRIGBSY BEAR is the name of the show, which was created for the boy James by a couple pretending to be his parents. James returned to his real family, but they didn’t understand his desire to finish the shooting of a fairy tale. Nevertheless, the hero manages to win over even the policeman leading the case of his abduction. Finally, the work of the newly-born director had positive reviews.

In spring 2017, there appeared information that the Lonely Island in collaboration with the Canadian actor and director Seth Rogen was going to shoot a comedy based on the events of the Bahamian festival Fyre. It was planned for December 2016. A lot of stars participated were, tickets cost thousands of dollars, and all ended with a grandiose failure and scandal. The organizers were accused of fraud.

At the beginning of 2018, Andy and his friends worked together with Natalie Portman. The actress and musicians shot the video "Natalie's Rap 2.0". The first part of the video was presented by the Hollywood diva in 2006 on the television show The Saturday Night Live.

In May 2018, there was a continuation of the comedy series "Brooklyn Nine-Nine" with Andy Samberg and Akiva Schaffer. The FOX channel, after five seasons, refused to broadcast it, as well as Netflix and Hulu. The rights were transferred to NBC, and 13 more episodes were shot.

Later, The Lonely Island took part in the comedy and music festival Clusterfest in San Francisco. Such celebrities as Amy Schumer, Jon Stewart, and Trevor Noah also came to the festival.

In the middle of summer 2018, the sequel "Hotel Transylvania 3: Summer Vacation" was released, in which Andy Samberg still voiced Jonathan. 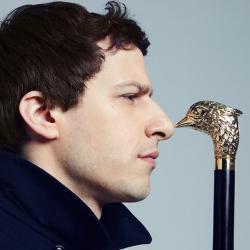