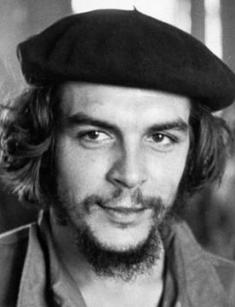 June 14, 1928, in the third-largest city in Argentina, Rosario, a boy, Ernesto Guevara, was born. He was remembered in history as a statesman and a revolutionary.

Che Guevara (the prefix-nickname "Che" was used by Ernesto to indicate his roots and Argentine origin to society) lived a bright, vibrant, and at the same time, dangerous, stressful life, having done much for the people of different countries.

The bold revolutionary was born in a bourgeois family. His father was an architect, and his mother was a descendant of planters. The origin of the couple is associated with Argentine Creoles (European settlers). But Che Guevara also had Creoles from California in his background.

Initially, the parents of the future Comandante lived in Buenos Aires and then moved to Misiones, where Celia (mother) inherited a plantation. Trying to earn honestly and fairly, paying wages to workers, which in those days was considered an odd thing among the planters, they caused a storm of indignation from competitors. As a result, Ernesto's family had to go to Rosario, where their son was born.

The Guevara family also raised other children-two sisters (Celia and Ana Maria) and two brothers (Roberto and Juan Martin). Despite the difficult years, the economic crisis in the country, the children of the architect's family subsequently received higher education.

The boy was growing up a sickly child. When he was two years old, he faced a complex disease, bronchial asthma, and in his adult life, he tried to fight it. Ernesto's parents decided to move again to a new place of residence in search of ideal climatic conditions for their baby.

Che Guevara's childhood was spent in the province of Cordoba. Because of his illness, the boy could not go to school with his peers for some time, but at the age of four, he learned to read.

Ernesto graduated from high school in Alta Gracia, then went to College. After his graduation (1945), the future activist decided to become a doctor, passing the documents to the medical University in Buenos Aires. At the University, Che Guevara acquired the specialty of surgeon and dermatologist.

According to biographical data, the young man was interested not only in medicine but also in other sciences.

The works of Lenin, Marx, Bakunin, and other philosophers of that time made a great impression on young Ernesto. Che Guevara was fluent in French, knew many poems by heart, was engaged in writing his lines.

His asthma bothered him from time to time, but that didn't stop him from exercising. In his youth, Ernesto was listed in the reserve team in football, enjoyed visiting the equestrian club, had excellent skills in golf, and also traveled greedily on a bicycle. In the biography of the Cuban figure, there is information about how the young Che Guevara gave his bride a photo, signing it "King of the pedal."

Ernesto began to travel in his youth. As a University student, he decided to test himself as a sailor by getting a job on a cargo ship (1950). So he visited British Guiana, Trinidad. Next, Che Guevara became a participant in the advertising campaign of the company "Micron," which invited the young man to travel on a moped of its production.

To discover the world, to get new experiences, Ernesto visited different countries. The young man saw a lot of exciting places with his faithful companion-Alberto Granado (a doctor of biochemistry). With him, he toured Chile, Peru, the ancient cities of India, etc.

The question arises, where did the young student have the money to travel? The guys had different sources of money-making. They worked as loaders, dishwashers in public catering, tried themselves in animal health care. Sometimes the enthusiastic boys spent the night in the woods or just in the field.

During one of his travels in Colombia, Che Guevara first saw the horrors that gripped the country during the civil war. The character of a revolutionary was gradually awakening in him.

Ernesto made trips to the places that attracted him at the same time with his studies. In 1952 he managed to defend his diploma on the topic of allergic diseases. When he graduated as a surgeon, fate sent the "hero of the revolution" to Venezuela, where there was a vacancy in the leprosarium. The specialist decided to change the route, yielding to the persuasion of fellow travelers, and went to Guatemala.

After graduating from University, Che Guevara had to go to the army, but the guy decided to do the trick, deliberately making bronchial asthma return.

Upon arrival in Guatemala, the Republic was hit by war and bombings. The President of the state in Central America Jacobo Árbenz (a socialist) stepped down, and the newly elected Carlos Castillo Armas was a tough pro-American, which influenced the persecution and repression of residents who belonged to the category of liberal ideas.

So, Che Guevara joined the flow of military action. He assisted the opponents of the new regime in the transportation of weapons, helped with fires. As a result, the socialists lost, and the young man was among the criminals of the country, who were expected to be punished and repressed for treason.

Ernesto was forced to flee. His refuge was the embassy of his native Argentina, and in 1954 Guevara moved to live in Mexico City. Here he tried working as a journalist, a photographer, a nightguard. He was always looking for a job.

During the same period, Ernesto married a girl he met in Guatemala, Hilda Gadea. After a while, Che Guevara got a job in a local hospital. In June of 1955, an old friend of Ernesto came to see him. The young man was a Cuban revolutionary. The meeting ended with Ernesto's proposal to become part of the revolutionary movement against the dictator of Cuba and go on an expedition to the Caribbean island. Without hesitation, the young man agreed.

In July 1955, Ernesto met Fidel Castro, who came to Mexico City from the United States. Together they became the foremost leaders of the impending movement in Cuba.

The preparation for the revolution caused difficulties for its participants. Due to the leak of secret information, Che and Fidel were arrested but were saved by the protection of cultural and public figures. Guevara was in prison for 57 days, and then continued the implementation of the idea.

A troop of revolutionaries left Mexico City and went to Cuba. The ship sailed on November 25, 1956. At sea, Ernesto and his supporters were shipwrecked, came under fire from the local government aircraft. Men were killed, others were captured. Che Guevara and several other revolutionaries became guerrillas.

Deadly danger always surrounded Ernesto; he caught malaria during his days in the guerrilla group. During the war, the young revolutionary read a lot, wrote his works, kept a personal diary.

In 1957, the rebels managed to take control of some of the territory of Cuba (Sierra Maestra mountains), new soldiers began to appear - supporters of the movement and opponents of Batista.

Then Ernesto received the military rank of "Comandante" and led a colony of 75 soldiers. At the same time, with the military actions, Guevara was active in propaganda as the editor of the newspaper El Cubano Libre (English: The Free Cuban).

The revolution took a severe turn. The partisans had established contact with the Cuban Communists and launched an attack on the territories of the local valleys. Che's army reached the Escambray Massif, and Guevara established power in Las Villas.

During the revolution, the rebels carried out a series of reforms in favor of the peasants, who decided to support the revolutionaries in military action. In the battle of Santa Clara (January 1, 1959), the Comandante's army won, and Batista left Cuba, emigrating to another country.

The rebel leader gained popularity around the world; in 1959, Ernesto became an official citizen of Cuba according to the decree of the government of Fidel Castro.

As Minister of Industry, Che went on a world tour of countries. He visited Pakistan, Burma, Japan, and other states.

Then Che Guevara had to fight again. Relations between the US and the Cuban government became strained. Liberty Island was the scene of an enemy attack, with Ernesto leading the resistance operation. The Americans lost, their plan failed.

Throughout his life in Cuba, Che Guevara held public offices, made public speeches, adhered to his principles, sometimes even came into conflict with allied countries. At some point, Ernesto decided to leave Cuba. He wrote farewell letters to his parents and Fidel and quietly left the Republic (spring 1965).

After leaving Liberty Island, Guevara went to the Congo, where there was a severe political crisis in those years. Ernesto and a small army of Cubans assisted in the guerrilla socialist insurgency.

The famous revolutionary shared his experience in military affairs, actively participated in the revolution. He helped to reach some compromises for the socialists, but he failed to achieve his original goals. As a result, the Comandante left the Congo. In the fall of 1965, Africa became the next place of his activities.

Here Ernesto fell ill again with malaria, and asthma attacks resumed. Che Guevara went to a sanatorium in Czechoslovakia for treatment, but even in a quiet place, he did not stop planning new revolutionary movements.

In 1966, Che returned to Cuba to lead a guerrilla force in Bolivia. He became a real threat to the CIA. The government of the US announced an impressive reward for the assassination of the revolutionary. Guevara lived in Bolivia for 11 months.

Guevara's first love was for his cousin Carmen. The girl loved to dance, and that attracted the teenager.

In his youth, medical student Ernesto was in love with a girl from a wealthy family in Cordoba. Seeking her hand, but looking like a tramp, Che could not enter the "elite" circle of landlords. The wedding did not take place, because Maria's mother convinced her daughter to break the engagement.

The entire life of Che Guevara passed in the struggle for the idea of freedom and equality of ordinary citizens, so love for women was born in the young man at the same time as his revolutionary ideas. From his first marriage with Hilda Gadea, with whom they got married in Guatemala, Che had a daughter. The couple named the girl Hilda. It is believed that the first wife inspired the young man to take an interest in politics.

During the battles, the father wrote touching letters to his daughter. The family broke up after four years of complicated married life at a long distance.

In 1987, the politician remarried. His second wife was the girl Aleida March, who was also a member of the revolutionary movement in Cuba. Their relationship began before the revolutionary's divorce from Hilda. The couple, united by the same idea, had four children.

Little is known about Ernesto's last love, the partisan Tania. The wife of the Argentine learned about her only after the death of her husband.

Once captured by the Bolivians, Ernesto was terribly tortured. He refused to inform officers, and on October 9, 1967, Che Guevara was shot. His dead, mutilated body was put on public display. Some of the limbs of the rebel were buried in a mass grave. The remains were only discovered in 1997.

People dedicate songs to "The icon of the world revolution," Ernesto Guevara. There is a number of movies about his life (The Motorcycle Diaries, Che, The Hands of Che Guevara), as well as TV shows.

Today t-shirts with the photo of the hero are the prototype of the revolutionary spirit, respect for the great Comandante. And on October 8, Cuba loudly celebrates the holiday dedicated to the Heroic Guerrilla, which was Ernesto.

“Many will call me an adventurer, and that I am...only one of a different sort: one who risks his skin to prove his truths.”

"Let the world change you, and you can change the world."

“Silence is argument carried out by other means.”