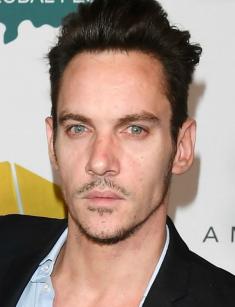 Jonathan Rhys Meyers is an actor of Irish origin, who gained great popularity after playing the leading role of King Henry VIII in the TV series The Tudors.

The boy was born on July 27, 1977, in the capital of Ireland and was given the name Jonathan Michael Francis O'Keeffe. Since he was born with a heart defect and prematurely, doctors did not leave the child a chance of survival, and the parents hurried to baptize the baby. But despite the gloomy forecasts, Jonathan got stronger. A year later, the family moved to County Cork, where they settled in a tiny apartment.

Three years later, his parents, Geraldine (née Meyers) and John O'Keeffe got divorced, and the mother was left alone to raise four children, Jonathan, Jamie, Ali, and Paul. Their grandmother also helped the mother take care of her grandchildren.

Jonathan in his school years was known as an incorrigible troublemaker and a truant. The boy was only interested in games and socializing with friends. For skipping classes on a regular basis, at the age of 16, the young man got expelled in his senior year, and so he went and got a job at a farm. Here, too, the young shepherd lacked enthusiasm for his work, but a lucky chance opened up great prospects for Jonathan.

The casting agent David Puttnam noticed the young man with big green eyes and suggested that the guy should audition for a film. The young man did not get the part but was offered a role in the advertisement for instant soup, to which he agreed. That is how Rhys Meyers got his first paycheck and made his mother happy, and his photos got onto the list of actors.

Soon Jonathan received his first proposals from the directors. The 18 years old aspiring actor worked on three projects at the same time: the drama film The Disappearance of Finbar, the Irish historical movie titled Michael Collins, and the Spanish horror comedy film The Killer Tongue. Immediately Jonathan changed his father's surname to his mother's, Meyers, and added the prefix, Rhys. Directors appreciated the charisma of the young man and his undoubted acting talent. Rhys Meyers was compared to a young Tom Cruise. The actor also appeared in the Saga of Samson and Delilah, the scenes of which were shot in Morocco.

In 1998, Jonathan was assigned the central role in the biographical drama Velvet Goldmine. The plot of the movie revolves around the life and creative destiny of a musician with a scandalous reputation, Brian Slade. Drugs, drinking, casual sexual affairs, homosexuality-all this Rhys Meyers was able to convey so organically that many fans of the aspiring star took him for a real gay.

Ewan McGregor and Christian Bale starred in the film together with the Irish actor. Todd Haynes' motion picture was highly rated by the British and American film academies, as well as by the critics of the Cannes Film Festival. Jonathan's uninhibited acting brought him the nomination for best debut of the year. Rhys Meyers, who grew up in a cramped apartment, spent the paycheck from the first big film on his mother, he bought her a spacious house.

In 2002, the family romantic comedy sports film directed by Gurinder Chadha, an English film director of Kenyan Asian origin, came out under the title Bend It Like Beckham, in which Rhys appeared together with the charming Keira Knightley. Jonathan was lucky to work with different directors and to have a variety of screen character that he had to get into on the set.

For several years he appeared in Mike Hodges' film I'll Sleep When I'm Dead, Andrei Konchalovsky's The Lion in Winter, Mira Nair's Vanity Fair. The Irish actor also starred in the horror film Octane, where he played together with Mischa Barton. In 2004, came out an epic historical drama film, which brought together a brilliant cast. In the movie featuring Rhys Meyers, Alexander, directed by American filmmaker, Oliver Stone, starred such world stars as Colin Farrell, Angelina Jolie, Val Kilmer, Jared Leto, and Rosario Dawson. The profit of the creators of the blockbuster was $ 167 million.

A year after the historical drama film, Rhys Meyers was invited to act in the television series Elvis. The actor received a Golden Globe Award for his work on the central role of the motion picture. In the same year, the actor starred in Woody Allen's psychological thriller film Match Point, the plot of which was based on the opposition to Fyodor Dostoyevsky's novel, Crime and Punishment. Jonathan's character, unlike Rodion Raskolnikov, tries to eliminate the evidence of the crime, and he manages to do so. The fascinating story, the acting of Rhys Meyers and Scarlett Johansson brought the film world recognition, and the profit from the international film screening was $ 78 million.

In 2006, he appeared in the film Mission: Impossible III, where the leading role was played by the legend of cinematography, Tom Cruise. In 2007, Rhys Meyers participated in the shooting of the drama film August Rush about an abandoned child who dreamed of finding his parents. The film has many musical performances, and the Irish actor sang some of the musical pieces. The film critics compared the plot of the movie with the story of a little foundling Oliver Twist from the novel under the same title by Charles Dickens.

In 2007, the TV channel Showtime hosted the premiere of the series The Tudors, which was destined to become legendary. The plot of the motion picture tells the story of the life of the legendary King of England Henry VIII, who was the second representative of the Tudor dynasty. The history of his personal life was tragic since no wife was able to give him an heir to the throne, who would become the successor of his father.

However, the daughters of the King, Mary I of England and Elizabeth I of England were remembered in history as brilliant rulers. The television series consisted of four seasons, throughout which acted such actors as Henry Cavill, James Frain, Natalie Dormer, and Maria Doyle Kennedy. The season ratings ranged from 65% to 75% of the channel's total audience.

In 2010, the American supernatural thriller horror film Shelter, with Jonathan and Julianne Moore in the leading roles came out. In this film, Rhys Meyers for the first time in his career played a mentally unbalanced patient, who communicates with the other world through the unconscious part of his mind.

The complete opposite was the work of the actor in the action film directed by the legendary filmmaker Luc Besson, From Paris with Love, which was released in the same year. In the action movie, Jonathan played an undercover CIA agent who gets into mafia business together with the character of John Travolta.

In 2012, the romantic drama film Belle du Seigneur, the acting debut of model Natalia Vodianova came out. The film takes the audience back to pre-war times and offers to the court of the viewers' justice the eternal story of tragic love, the power of passion of which is not a bit less than the love in the relationship between Tristan and Isolde or Romeo and Juliet.

A year later, the world premiere of the horror drama television series Dracula, directed by Cole Haddon, took place, in which Rhys Meyers played the main character. Dracula, having gotten into modern times, is trying to find his enemies from the past, but suddenly finds true love. As befits a film about the Prince of Hungary, a part of the shooting took place in Budapest. In the television series, besides Rhys Meyers played Jessica De Gouw, Thomas Kretschmann and Victoria Smurfit.

Rhys Meyers has a unique appearance. Not only the directors note the attractiveness of his looks, expressive facial features, and sculptural body. The tall actor (Jonathan's height is 5 feet 83 inches) works a lot in the modeling business.

He became the face of men's clothing lines of Versace and Energie, fragrances of Hugo Boss. And even the passion for alcohol, the addiction to which was repeatedly seen, did not affect the appearance and the modeling career of Jonathan.

Rhys Meyers, having explicit sexuality, is quite conservative in his views on the family and relationships with the opposite sex. He doesn't swap girls like he changes socks. Jonathan went out with the daughter of Ruby Hammer, the owner of a cosmetic brand, Reena Hammer, for seven years. But the couple could not find common ground, and after the engagement, the young people separated.

After breaking up with his girlfriend, Rhys Meyers tried to commit suicide, but he was rescued just in time by his loyal friends. The actor has not revealed the real reasons for his suicide attempt, but it is known that since 2007, since the death of his mother, Rhys Meyers was depressed and struggled from heavy drinking. After spending a few months in a rehabilitation clinic, Jonathan began dating Australian model Victoria Keon-Cohen, but the relationship did not last long.

Since 2013, Rhys Meyers began to be noticed in the company of Asian actress Mara Lane. The girl did not want to rush the relationship for a long time; Rhys Meyers still often lost control and appeared drunk in public. After another incident at the airport, where he was detained under the influence, the actor publicly apologized to fans from a friend's Instagram account and promised to quit with a harmful addiction. Rhys Meyers kept his word, and Mara started to be seen in public with a wedding ring on her finger.

On December 15, 2016, Jonathan became a father for the first time at the age of 39. His wife bore him a son, whom the couple named Wolf Rhys Meyers.

Now Rhys Meyers continues on his path to glory. In 2016, the artist played in the historical drama miniseries Roots; he was also invited to play in the fifth season of the television series Vikings, which is considered the most profitable project of the History channel.

The first episodes with Jonathan were released in the spring of 2017. In 2017, the film Black Butterfly, based on a 2008 French movie for television, Papillon Noir, came out. Besides Jonathan, Antonio Banderas, Piper Perabo, and Abel Ferrara starred in the new film.