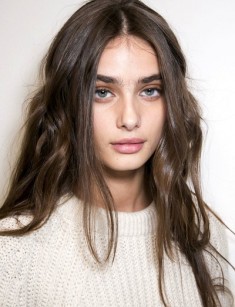 Taylor Hill is the best model of the year according to Fashion Media Awards. She is the youngest "angel" of Victoria’s Secret underwear brand and one of the highest paid representatives of the fashion industry. Millions of the girls are envious of the model, but Taylor says that it’s very boring to be ideal, and she lives according to the rule acquired from her art teacher:

"You can achieve the masterpiece due to its imperfections."

Taylor Marie was born in March of 1996 in the small town of Palatine, in the State of Illinois. Except for Taylor, her parents have a son Chase and daughters Mackinley and Logan Rae. Following the example of Taylor, her sisters also became models.

Taylor is obliged for her beauty to her ancestors of different nationalities – Turkish, Irish and Indians of Cherokee, and for her slim figure – to the gymnastics section which she began to attend at the age of three. She is Pisces according to the astrological sign. It would seem that this sign has emotional nature and appreciates rest and silence. Though, Hill admits that it is only her appearance that is peaceable and she owns "noisy character".

Besides her studies at Pomona High School, Hill attended art school, and at present, she likes painting in her spare time. In childhood, the girl was so tall and skinny in comparison with her schoolmates that one could suspect her of having anorexia. She was embarrassed about this fact.

Everything had changed when the photographer Jim Jordan noticed the future star of the podiums on the family ranch. He took the first photo shoot of Taylor Hill and became her guide in the fashion world. People who mocked at Taylor just yesterday began to write her messages on Facebook, trying to remind her that they knew each other.

At the age of 17, Taylor moved to Europe with her mother, but not for education; she came here to start her career as a model. At first, they decided on the choice of the model agency. The girl insisted only on IMG Models agency because it "has promoted" her favorite model Gisele Bündchen.

She passed the casting successfully, and soon the gorgeous young lady participated in the fashion parades of Atelier Versace, Dolce&Gabbana, Ralph Lauren and other brands. The pictures of the brown-haired young girl with green eyes appeared on the pages of "Sunday Times Style", "ELLE" and "Vogue" editions. Hill told that the most well-known fashion photographers - Marcus Piggott and Mert Alaş taught her to liberate in front of the cameras, just allowing her to squirm.

In 2014 Taylor’s dream came true – she took part in the fashion display of Victoria’s Secret for the first time. A year later the company offered her formal collaboration. When the girl got news that she became the new angel of Victoria's Secret she was delighted. By the word of Taylor, she increased her cross-fit training and began to observe healthy diet to impress her employers and to be ready for everything.

However, not everyone liked the choice of seven new "faces" of the brand. Earlier the company followed the style of bright flashy girls with forms as Alessandra Ambrosio and Doutzen Kroes. So, when Hill, Sara Sampaio, Romee Strijd and other four girls appeared on the displays of this brand the public called them "stamped baby-faces" without an expression of individuality.

In 2016 Hill took part in sensual advertising of Colin's jeans clothes with the Turkish actor Çagatay Ulusoy. By rumor, after the shootings according to the plot in which Çagatay saved Taylor who was drowning, the actor began to show his affection to the model. But the girl’s heart was already set upon another.

A little bit later Hill joined Julia Roberts, Kate Winslet, and Isabella Rossellini and became the face of Lancôme cosmetic brand. The celebrity regularly received offers to advertise different beauty products in the social networks, but she didn't risk and was waiting for the corresponding brand to be beneficial to her subscribers. The girl regularly posts pictures of beauty products from this world brand on her page on Twitter.

According to Forbs' estimations, Hill earned more than $4 million for this contract and additional contracts with the producer of beachwear and accessories Rosa Cha, Swedish H&M and Forever 21 brands.

The actor and the model Michael Stephen Shank managed to conquer the beauty's heart in 2015. And rumor has it, that before beginning relationship with Taylor, the guy was seen in the company of other "angels" - Sara Sampaio, Jasmine Tookes and Martha Hunt. At present Michael's movie career is limited to episodes, for example, in the cult "soap opera" under the title "The Bold and the Beautiful" about the life of the model agency.

The girl tries not to skip her meals to keep her perfect figure in shape (Taylor weighs approximately 55 kilos with a height of 176 cm). The girl prefers eating meat, fish, chicken and useful proteins, but she can also afford herself fast food or sweet dishes. As "life is too short to refuse a pleasure to eat a burger or a chocolate bar." The model isn't afraid to put up weight – then she works out excessive food during her yoga practice or in the gym.

Her profession demands that Hill keeps up with her appearance. Therefore, the model tries to take a nap every time she has such an opportunity. She almost doesn't apply any makeup out of the shootings (only a make-up of eyes). Moreover, her mother who is a hairdresser helps her to take care of the hair. What about suspicions of plastic surgery, Taylor says that she has never made any similar operations. In youth, she only tried to extense her eyebrows.

Taylor is the great fan of the Instagram social network. She has elaborated the whole set of rules to make perfect selfies. At the same place, her admirers can become aware of the fact that Hill isn't pregnant yet. The girl thinks that this social network has brought the stars including the models, down to the earth. Now people don't believe that celebrities spend their life only appearing on the podiums and red carpets, they are ordinary mortals:

"Our lives are in the open, and I want my followers to feel as if we know each other."

If Hill gets some spare time, she spends it with her family or prefers reading books or snowboarding. Taylor's favorite singer Taylor is Selena Gomez, and Angelina Jolie – is an image of the ideal woman, mother and creative person for the model.

The model can’t stay indifferent to the acting experience of her colleagues as Laetitia Casta, Amber Valletta, and Gal Gadot.

Taylor performed in the cameo role in the movie "Extra", in the short-length movie "Hollywood Temptations" which came out in limited cinemas and in the psychological thriller about the dark side of the model business "The Neon Demon" with Elle Fanning and Christina Hendricks.

In her interview for the "Fashionista" portal, Hill appealed to the directors of "Star Wars" to consider her candidacy for the role of the intergalactic wanderer. At the very least, Taylor is ready to transform into the alien in the song video of Sia who is famous for amazing videos.

In November 2017 Victoria's Secret Fashion Show for the first time for all history took place in Asia, in Shanghai, with the most numerous audience of 18 thousand people at Mercedes-Benz Arena.

Such remarkable world-famous models, including "veteran" Adriana Lima, Candice Swanepoel who has recently given birth to her child, Lais Ribeiro, Taylor Hill and first "angel" from China Liu Wen appeared on the podium. The girls for the first time presented the exclusive luxury collection of Balmain underwear.

At the musical part of the program there appeared the singer and the dancer Leslie Odom Jr., the British performer, the soloist of the "One Direction" band Harry Styles who replaced Katy Perry who didn’t succeed to get the entry visa because of Chinese authorities.

In spring of 2018 Taylor together with Kristen Stewart and Stella Maxwell became the guests of one of the most remarkable musical festivals - Coachella Valley Music and Arts Festival in California.

But the attention of a great number paparazzi was attracted not by the headliners of the event - The Weeknd, Beyonce, and Eminem, but by the top model in the seductive violet suit. As it was stated later in the tabloids, Hill got drunk and practically couldn’t walk on her own. Her boyfriend Michael Shank with his friend "evacuated" the " angel" from the party. 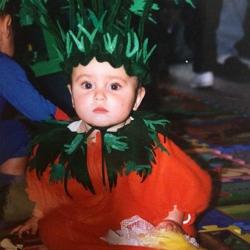