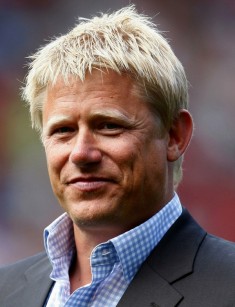 A goalkeeper is one of the most significant figures in soccer: often, the game results depend on them, and they may be accused of their team’s defeat. Although fans admire forwards and midfielders more frequently, there are many goalkeepers, such as Oliver Kahn, Gianluigi Buffon, and Iker Casillas, whose names are legendary. The Dutch soccer player Peter Schmeichel is not the last player in this list.

Peter Bolesław Schmeichel was born in Gladsaxe on November 18, 1963. The boy’s father was Polish, and the mother was Dutch. Peter had the Polish citizenship until seven.

The star goalkeeper’s career could have been different: in his childhood, the boy was not obsessed with soccer like many famous players were. Playing was just his secondary hobby. What Peter really liked was music, especially classical and piano music. Besides, the young man took fancy in glam rock. Peter was the member of the rock group founded by his school friends.

In addition to piano and guitar, Schmeichel was fond of handball. In his interviews, the goalkeeper marked that his handball skills helped him protect gates more effectively.

The boy started playing soccer in Gladsaxe, the local club. The coach insisted Schmeichel choose this sport as the main activity.

After Gladsaxe, the player transferred to Hvidovre where he appeared on the field as a forward; by the way, he scored six goals. As Schmeichel noticed, this experience was useful for him: a goalkeeper should be capable of anything, just like a clown. It was easier for the former field player to predict the opponent’s strategy and feints and react on time.

However, the gate attracted the sportsman, and he got his long-awaited position soon. In a while, clubs from the higher divisions noticed the promising player. In 1987, the goalkeeper signed the contract with the professional club Brøndby which was the strongest club in the country.

The English were also interested in the goalkeeper’s talent. In 1987, the representatives of Newcastle United negotiated with the Dutch for the possible transfer; in the end, they considered Peter unexperienced and canceled their plans. Nevertheless, in 1991, Schmeichel got to England: he signed the contract with Manchester United. The transfer cost was about £500-800 thousand.

Later, the head coach of the Red Devils Sir Alex Ferguson called this agreement the purchase of the century. Schmeichel built the wonderful career and became the soccer legend.

The mid-1990s were victorious for the team, and Peter Schmeichel’s contribution was significant. The list of the club’s accomplishments included but was not limited to five champions titles, three FA Cups, and the victory in the Champions League.

1994/1995 was the least lucky season. In 1994, the goalkeeper whose results remained splendid was criticized by the coach after the game with Liverpool: Manchester was the leader (3:0), but later missed three goals. The match ended with the conflict between the coach and the goalkeeper; Schmeichel’s reaction to the coach’s critics was sharp. Later, the Dutch cooled and apologized to Ferguson and the team.

Physically strong and tall (193 cm. with the weight 96 kg.), the goalkeeper could reach the balls whose trajectory seemed to make it impossible to catch. Schmeichel’s trademark pose was to lift his arms widely and stand with his legs wide apart: it helped cover the largest area of the gate possible. In addition, the goalkeeper supported his teammates: with his stentorian voice, Schmeichel suggested what defenders may do.

The sportsman’s attacking experience manifested itself: he became famous not only for his ability to hit the ball back but also score a goal to his opponent. For the first time, it happened at the match between Manchester United and Rotor Volgograd. Schmeichel crossed the Volgograd’s penalty line and scored.

In 1999, the goalkeeper repeated this trick: during the decisive Champions League game against Bayern Munich, the Germans were astonished when the goalkeeper suddenly left his gates and ran to the opposite side of the field. At that moment, Manchester United scored a goal.

As the season 1998/1999 was over, Peter left the club in spite of his colleagues’ and fans’ attempts to talk him out of it. The hectic timetable and frantic rhythm of the English Premier League made the goalkeeper change England for warm Portugal: the sportsman joined Sporting.

In a while, the player started missing the Premier League which felt like home for him and transferred to Aston Villa to join Manchester city later. He spent two seasons in English clubs and finished his field career in 2003.

Apart from the club career, the goalkeeper’s results in the national team (1987-2001) were outstanding. In 1992, the impressive achievement of Denmark took place: the country was included in the European Championship after Yugoslavia was disqualified for the political reason. Nobody viewed Denmark as the championship’s favorite, but the team gained the victory and defeated the strongest teams of the continent.

Just like many public people, Schmeichel prefers not to talk much about his family and private life. In his interviews, the goalkeeper often empathized he liked to be unrecognized outside the soccer field. The man is glad to discuss weather, music, or soccer, but his family life is personal.

It is known that the goalkeeper’s ex-wife Berta is the daughter of Peter’s first coach in Gladsaxe. In 2013, the couple divorced. Schmeichel’s son became famous: Kasper Schmeichel followed in the footsteps of his father and started playing for the Denmark national team. He is also the goalkeeper of Leicester City.

In the 2015/2016 season, Kasper and his club became the champion of England. The father was proud and perfectly happy. He even changed his Twitter profile description: “Father to a Premier League winner.”

As he finished his professional soccer career, Peter began to work on TV: he is the TV presenter of “The Peter Schmeichel Show” on RT Channel where he informs about soccer events. The program photos and news are posted on the Instagram page.

Peter Schmeichel is the recognized expert in the world of professional soccer. He often works as a consultant and guest in programs related to soccer. During the FIFA World Cup 2018, the goalkeeper visited Russia, recorded a series of programs about Russian host cities, predicted game results, and gave expert marks to matches.

According to Mirror, in 2018, Peter will join the coaching staff of Sporting (Lisbon), the team where he used to play. Although Schmeichel has no considerable experience in coaching, he is the expert of playing; he is to become the mentor of the club’s goalkeepers. 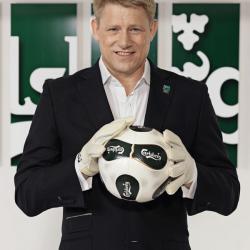