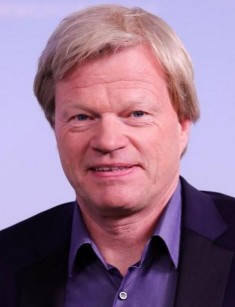 In his homeland, people call harsh Oliver Kahn by the nickname Olly. Such a tender nickname of this football player sounds a little bit strange because by the remarks of his fans he looks frightening. The German is tall and big (his height is 188 cm, and he weighs 91 kilos), and also looks ominous because of his overbite.

Kahn has gained the reputation of the ruthless player. The fans of Bayern Munich football club adored him, and the fans of the clubs hated him. The footballer has heard lots of nasty words behind his back. People even threw bananas at him because of his nickname - Gorilla. For his career, the sportsman has got a lot of ups and downs, but he deals with all situations with pride.

The skilled German goalkeeper was born in the city of Karlsruhe situated near the border of Germany and France. His father Rolf Kahn who also was a football player in his past played as a midfielder in the same name local club. Later, he finished his career as a footballer and tried himself as a coach of the younger generation. The coach has educated the future football stars, but his son became the best of them.

Rolf was training his successor as a future goalkeeper. He considered that there were many football players, but the goalkeeper was at a premium. When the boy turned seven, his father presented him gloves of his legendary compatriot - goalkeeper Sepp Maier as an incentive.

In childhood, Oliver has experienced the cruelty of the children. The kids teased the boy because of his overbite which prevented him from talking correctly. At that time he got the nicknames of Gorilla, Bulldog, and Pithecanthropus.

Kahn has taken lots of efforts to get rid of this defect and to make his speech clear for the people around. His diction was back to normal, but his nicknames remained.

Until the age of 17, Oliver Kahn was playing as a member of the youthful team of Karlsruher FC, and in 1990, at last, he got to the primary structure of this team.

In the primary structure of the football club, the young man was just the third goalkeeper. But in a short time, he has demonstrated his natural skills and became the second goalkeeper. Alexander Famulla was the forward of the team during all that time. The aspiring football player had a burning desire to occupy the place of his teammate, but he had to wait for some time. And at last, fortune favored the German footballer: once Famulla stepped out and was dropped out for three matches, and Oliver got the position at the gate.

However, Kahn hasn't fulfilled the expectations. In the very first match, the young man has let four goals happen. In general for three games when he was at the gate, he allowed the rivals to score nine goals. Because of many failures, the goalkeeper was under the threat of leaving the team. By the miracle, he remained in the club but spent the whole team on the bench.

His hard training and desire to prove that he had potential and skills again took the young man to the position at the gate. And then the team began to achieve the victories one by one. In 1993 Karlsruher got the permit to take part in UEFA European Championship where Oliver occupied the position at the gate. At the same period, the goalkeeper who had already become the main goalkeeper joined the German national team.

During five years Kahn didn’t participate in the national team, the footballer stayed in reserve. He only took part in two matches against the Georgians and Swiss. After the leaving of Andreas Köpke, he got the chance to play at the gate of the national team.

After the brilliant play in UEFA European Championship, the German footballer attracted the attention of the prominent football clubs - Barcelona and Juventus football clubs wanted to get him as their player. In 1994 Oliver Kahn accepted the offer of transition to Bayern Munich FC. The sum of the transfer reached 5 million marks. At that time this was a considerable rate. Before Oliver joined this team, Raimond Aumann was the primary goalkeeper of this strongest German team.

With Kahn as a member of the team, Bayern Munich won the UEFA Cup. During the next season, they had one more achievement – they received gold in German Bundesliga. At that time nobody questioned the high skill of the goalkeeper. The young man got thousands of admirers in a short time. The public called Oliver the leader of the football club.

In 2001 he led the team to the victory in the Champions League, having blocked the penalty three times at the end of the match with Valencia. These saves were included in the selection of the brightest saves in Kahn's career, and you can watch them on the web. Moreover, the goalkeeper is an owner of the prestigious Ballon d'Or award.

The German also has set records in his biography. In spring of 2007, the goalkeeper of Bayern Munich has set a new record of German Bundesliga by the number of winning matches for the individual football player. The Munich team defeated Bayer 04 Leverkusen FC with the score 2:1. It was the 292nd victory for Kahn in the championship of the country.

Except for team success, the German footballer won international awards. Kahn managed to become the silver prize-winner of FIFA World Cup 2002. The goalkeeper finished his career in the national team in 2006.

In addition to the awards the football player also received titles. At the beginning of 2000, he became the best goalkeeper of world scale and even the best footballer of Germany three times. Moreover, Oliver has beaten other goalkeepers in quantity of missed goals in FIFA World Cups. He got the third place with the number of matches in home championships with the result of 552 games.

The European football clubs fought for the goalkeeper, but Bayern Munich didn't want to let the talented player go. Whenever Oliver began to think over the new offer, the direction of his football club raised his salary.

In early autumn of 2008, Kahn finished his career as a football player.

The matches with participation of Oliver Kahn involved many fights and amusing cases. The football player could quickly begin to quarrel with the rival or kick his colleague. So, during the training of Bayern Munich, the goalkeeper grabbed a player because he had neglected his football duties. And once during the match with Belarusians, he bit the midfielder. Later in the interview, the victim stated that when he became aware of the fact how the Bulldogs were biting. Thus, he hinted at Kahn’s nickname.

In 2001 football fans were laughing at the goalkeeper of Bayern Munich because he scored the goal with his hands. The matter was that Oliver wanted to score the goal to the rival's gate at least for one time. He got such an opportunity in the match against Hansa FC. Kahn forgot that appeared on the field as a player, he approached the penalty area of the opponent and scored the goal with his hands. The referee didn’t count the goal and gave the goalkeeper a yellow card.

For many years Kahn and Jens Lehmann were enemies. The latter was dreaming of being the first goalkeeper the national team. And at last, fortune smiled upon the footballer. The season 2004-2005 wasn't successful for Oliver, and Lehmann occupied his position in the next FIFA World Cup.

This superiority resulted in the reconciliation of enemies: after the quarterfinal match with Argentina in which Lehmann got the penalty series Kahn came closer to Jens and congratulated him.

However, the fans and the opponents remembered Oliver Kahn as an empathizing person. There was a moving story in the final of the Champions League of 2001. Bayern Munich FC was playing with Valencia FC. During the match died the mother of the goalkeeper of the rivals - Santiago Cañizares. The football player got down on the grass and began to cry. Oliver hurried to the goalkeeper and consoled him with the words -

"Cañi, don't cry, your mother is looking at you at the moment, and she is proud of she gave birth to the legendary goalkeeper, to you".

After that Santiago rose to his feet and continued to play.

The personal life of the German player isn’t stable. Oliver has been persistently pursuing his former schoolmate Simone for fourteen years. As a result, in 1999 she became goalkeeper’s wife. She was pregnant when they got married. This woman gave birth to two of Kahn's children – a daughter Katharina-Maria and a son David.

However, the football player didn’t become the ideal head of the family. In four years after the wedding, Oliver left his wife for the young waitress Verena Kerth. At that time his spouse was pregnant for the second time and was about to give birth to the child.

Verena was 11 years younger than the football player. They didn't get married and were living together. Later the girl made up her mind to reunite with her ex-beloved - the young Greek Alexander. Oliver returned to his family. But the spouses didn't manage to restore their feelings and broke up finally.

However, football player didn't stay alone, In 2011 he married for the second time to the woman called Svenja.

Kahn has written two books. In 2004 he wrote the book under the title "Number One," and four years later he published the memoirs book "Me. Success comes from inside". The man has a financial education that’s why he is successful in playing on the stock-market.

After the end of his football career, Oliver decided to conquer the television where he became the popular TV host and the sportscaster. He comments on the matches of Bundesliga and the German national team. The former goalkeeper has a page on Instagram and regularly posts new photos. 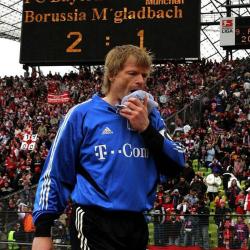