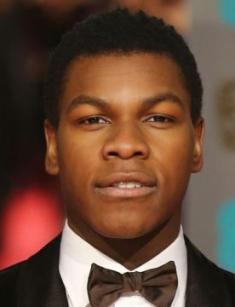 John Boyega is an English actor. He rose to fame, participating in the epic saga Star Wars. The artist is often called one of the most promising representatives of modern cinema, who can prove his potential in large-scale Hollywood projects over the coming years.

John Boyega was born in Peckham, a district in south London. The parents of the future celebrity are immigrants who came from Nigeria. The father is a Pentecostal minister. His mother is a volunteer who cares for the disabled.

When it was the right time to go to school, John enrolled in Westminster City School, where the boy participated in school productions and even played several small roles in Theatre Peckham. Young Boyega liked to perform on the stage, and his parents allowed the son to go to the Identity School of Acting in Hackney.

After graduating from high school, John attended South Thames College, where he studied acting and drama. After graduation, he worked at the National Theater, where his memorable role was the image of the Moor Othello in the Shakespearean tragedy Othello. The artist also sometimes appeared on the stage of Theatre Peckham, which later became his favorite place.

John Boyega first appeared on television in 2011, when he was studying in college. The actor played a supporting role of Danny Curtis in the TV series Becoming Human. Then the episode "Survivor's Guilt" of the famous series Law & Order: UK was released, in which the actor got the role of Jamal Clarkson. John also played in the TV series Da Brick about Mike Tyson, but they cut all the scenes with the actor during the final editing of the pilot episode.

Besides, in 2011, Boyega appeared in feature movies. He portrayed the leader of the teenage gang, Moses, in the fantasy action movie Attack the Block. For the role in this film, John won the Black Reel Award for Best Actor. The artist also played a secondary role as a drug dealer in the crime drama Junkhearts.

In 2012, the actor participated in only one project, the television drama My Murder. The following year, the actor starred in the BBC television movie The Whale, telling about the wreck of the Essex whaling ship in 1820. In 2013, the film adaptation of the novel “Half of a Yellow Sun” by Nigerian writer Chimamanda Ngozi Adichie also premiered, in which Boyega played Ugwu, the servant of the protagonist.

The same situation happened in 2014. The actor played Lieutenant Chris Tanner in the American TV series 24: Live Another Day and imprisoned gangster Bambi in the crime drama Imperial Dreams. In 2015, John Boyega tried his hand at a new activity, voicing a cartoon character named Blkmrkt in 11 episodes of the animated series Major Lazer.

But the main work of 2015 is the filming of the popular science fiction saga Star Wars: The Force Awakens. There, the actor played the leading role, a new character named Finn. It also became known that John Boyega signed a contract for shooting in the eighth installment of Star Wars. It is the greatest success in his acting career. According to American media reports, John Boyega and Daisy Ridley, who got the role of Rey in Star Wars, earned $450,000 for the project.t

In 2016, the actor starred in the American science fiction drama The Circle, released in April 2017. The actor’s partners were Tom Hanks, Emma Watson, Karen Gillan, Bill Paxton, and other famous representatives of world cinema.

A busy schedule does not allow John to start a serious relationship, so there is little information about his love affairs. In the summer of 2017, Internet users were interested in the American media report, saying that John Boyega consulted with Robert Downey Jr. and Orlando Bloom regarding relations with women. Some famous US tabloids wrote that Boyega asked his agent to arrange a meeting with Bloom and Downey Jr. to hear their advice.

Fans were surprised at such press reports because many viewers know the British actor as a hero who managed to overcome hardship and fought with the insidious villains of the Galaxy in Star Wars. They refuse to believe that he cannot establish relations with women.

The artist’s fans discussed the idol’s initiative on Instagram and the Twitter microblog; they advised John to look for a woman who would not be interested in his career, but Bloom and Downey Jr. concurred: “she must support and understand you, which means she should care about your career as well.”

In the summer of 2011, the actor appeared on the cover of the English-American Magazine Screen International, which named John one of the "UK Stars of Tomorrow." John is an avid fan of the Marvel superhero comic books. The actor admits that he dreams of playing the Black Panther, a character from these stories.

In July 2017, John Boyega criticized the popular series Game of Thrones. The English actor said that there are no dark-skinned characters in the new episodes of the project. The actor spoke about it in an interview with GQ magazine. Boyega claims that another famous fantasy saga The Lord of the Rings also does not have a single black artist. Thus, the actor accused the directors of a biased attitude towards African Americans.

“I ain’t paying money to always see one type of person on-screen. Because you see different people from different backgrounds, different cultures, every day. Even if you’re a racist, you have to live with that,” the Evening Standard newspaper quoted the British actor as saying.

Some viewers believe that John is dissatisfied with this situation because he does not participate in the most popular series of our time. According to Internet users, it was the reason for the actor to raise the issue of black artists in popular movies. It is commonly known that mainly white actors have been involved in Game of Thrones, but in reality, a certain number of dark-skinned actors have also appeared in the TV series.

The author of the series of novels "A Song of Ice and Fire," George Martin, was one of the first to respond to John Boyega’s arguments. It should be mentioned that the series Game of Thrones was based on his works. So, according to Martin, the world in which the events of his works take place differs significantly from America of the 21st century, because modern people have created completely different rules of life.

Nevertheless, the American writer plans to include more characters of other races in the next book of the saga, entitled "The Winds of Winter." The author claims that David Benioff and D. B. Weiss, the creators of the series, successfully cope with the task and create the characters of different races and skin colors in the movie. Therefore, according to Martin, the English actor’s accusations are insubstantial.

Today, John Boyega continues to participate in movies. In 2017, the drama Detroit was released, showing the most devastating urban unrest in US history, which took place in the largest city of Michigan in 1967. The movie Star Wars: The Last Jedi is scheduled to premiere in December 2017, in which Boyega will play the role of Finn, and the fantasy action movie Pacific Rim: Uprising is planned to be released in February 2018.