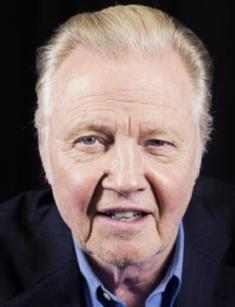 Jon Voight is an American actor who continues to star in movies at the age of 80. Angelina Jolie's father plays in films and produces TV shows, delighting fans with new projects. At the age of 14, Jon played himself in the TV series Today, and since then has not left the big screens. The most famous movies with his participation are Transformers, Heat, Anaconda, Enemy of the State, Lara Croft: Tomb Raider, and Mission: Impossible.

Jonathan Vincent was born in Yonkers, New York, on December 29, 1938, and was the second of three sons of Barbara and Elmer Voight. The actor’s elder brother, Barry, is a former volcanologist at Pennsylvania State University, and the youngest one, Wesley, is a famous composer.

Voight attended Archbishop Stepinac High School in White Plains. There he first showed interest in acting, choosing comedic roles. In 1956, Jon graduated from the school and entered the Catholic University of America in Washington, D.C. After graduating from it in 1960, the future actor enrolled at the Neighborhood Playhouse School of the Theatre in New Your City.

In his youth, Jon Voight worked in television and appeared in several episodes of TV series (Gunsmoke, Naked City, Twelve O'Clock High, The Defenders). In 1965, his theatre career took off because Jon got the role of Rodolfo in Arthur Miller's play A View from the Bridge in an Off-Broadway revival. Two years later, Jon won the Theatre World Award for participating in Frank D. Gilroy’s play That Summer, That Fall.

Voight made his movie debut in 1967 in Phillip Kaufman's fantasy parody film Fearless Frank (Jon played the title comedy role). The same year the western Hour of the Gun was released, in which the actor got a bit part. The role of Joe Buck, a naïve male hustler from Texas, is the most famous and sensational in Jon Voight’s acting career.

In the drama Midnight Cowboy (1969), the title character, Buck, gets lost in New York City and comes under the tutelage of the petty thief, Ratso Rizzo (Dustin Hoffman), who suffers from tuberculosis. They gradually become best friends. English director John Schlesinger shot the film based on the novel by James Leo Herlihy. The scandalous movie was rated NC-17, which meant that people under the age of 17 could not watch it without an adult. This restriction did not prevent the film from winning three Academy Awards: Best Picture, Best Director and Best Adapted Screenplay. Voight was also nominated but lost to John Wayne, who played Rooster in the western True Grit.

Critics praised Jon and viewers adored him. While having a run of good luck, producers prepared a real gift for the actor. It was a role in the film Coming Home (1978). This pretentious movie of Hal Ashby earned Jon the Academy Award. He received the second Oscar nomination for his role in Andrei Konchalovsky’s film Runaway Train (1985). However, another actor won the prize.

In 1972, Voight appeared in John Boorman's drama Deliverance, and in 1974 in the thriller The Odessa File, based on Frederick Forsyth's novel. In this movie, Jon's partner was notorious Maximilian Schell, who later became the godfather of his daughter Angelina Jolie. The famous actor who is 6.20 feet (189 cm) tall has unrealized projects. Jon was the first choice for the role of Matt Hooper in Steven Spielberg's horror film Jaws, but the actor turned down the part which was played by Richard Dreyfuss.

Jon reached his peak of popularity in the 70s. In the mid-80s, the actor began to give preference to the theater and TV projects. He even landed the role of the Texas Ranger, Woodrow F. Call, in the continuation of the mini-series, Return to Lonesome Dove (1993). Tommy Lee Jones played the same role in the first part of the film (Lonesome Dove). Blond Northerner Voight with a soft face and sky-blue eyes looked good on the screen in comparison with awe-inspiring Southerner Jones.

In 1995, Jon Voight appeared in Michael Mann's film Heat, and a year later in Brian De Palma’s Mission: Impossible. In 2001, Jon and Angelina Jolie played in the adventure movie Lara Croft: Tomb Raider. According to rumors, it was Jolie who persuaded the director to cast her father in a role. The actress hoped that their collaboration would bring them closer together, but there was no harmonious relationship on the set. According to the film crew, the father and daughter seized every opportunity to quarrel.

The most popular films with the participation of Jon, released in the early and mid-2000s, are Enemy of the State (1998), Pearl Harbor (2001), National Treasure (2004), and Transformers (2007). In 2016, the actor's filmography included a new role. Jon Voight appeared as Henry Shaw Sr. in the movie Fantastic Beasts and Where to Find Them, based on the novel by J. K. Rowling.

Jon has always tried to hide his personal life. Although the actor has been married twice, there is little information on the Internet regarding his relationship with women. Voight met his first wife, dancer and actress Lauri Peters, in 1962 in the Broadway production of The Sound of Music. Their marriage was short-lived and lasted from 1962 to 1967.

The media blamed Jon Voight for cheating on his wife. The children could not forgive this betrayal and avoided meeting with their famous father for a long time.

Angelina even took the middle name “Jolie” as her stage and legal name not to use the father’s surname. The relatives could restore their relationship only after Marcheline’s death in 2007. It is known that after the second divorce, Jon has never married again.

The eminent actor does not use either Instagram or Twitter. Fans find out the latest news about the actor’s life in interviews that are periodically published both on news portals and in print media.

At the end of 2017, the movie Same Kind of Different as Me is scheduled to be released, and its trailer is already available on the Internet. Voight played one of the leading roles in the film about a homeless person and a successful art dealer whose fates become intertwined.

Jon Voight has an estimated net worth of $45 million.