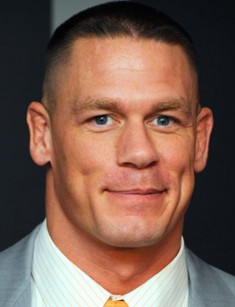 The American wrestler has won 25 Championships throughout his career, with 16 reigns as a World Champion. The athlete is the 13-time WWE Heavyweight Champion and the 5-time WWE United States Champion. John Cena starred in 17 films and released a rap album, which reached No. 15 on the Billboard 200 chart. The wrestler enters the ring to the sound of his song "My Time Is Now".

The future wrestler was born in the spring of 1977 in the provincial town of West Newbury, Massachusetts. John Felix Anthony Cena Jr. is the second of five sons of Carol and John Cena. In childhood, the boy distinguished himself with excellent health and physical fitness. In his early youth, Cena watched the battles of Hulk Hogan and Shawn Michaels holding his breath and did not even dream of the fascinating world of WWE.

John Cena pleased his parents with marks at school, and he preferred American football of all kinds of sports. After graduation from school, the boy submitted documents to 60 universities and was accepted at 58. John chose Springfield College, although it was not the most prestigious institution. He continued to play football there. The coach noticed the athlete and transferred him to the representative team of the college. A year later, the sports career of 17-year-old John Cena developed rapidly. The young man became a captain.

In the late 1990s, John graduated with a degree in exercise physiology. Against his father’s will, the former student with half a thousand dollars in his pocket moved from Massachusetts to California. John Cena dreamed of a bodybuilding career and was ready to endure hardships for the sake of future success. He cleaned toilets, brought the towels to the athletes and worked as a taxi driver. John had no money to rent a house, so he stayed overnight in an old Lincoln.

John became a wrestler by accident. In 2000, his friend and wrestler advised John to train at Ultimate Pro Wrestling, a WWE subsidiary. Cena was familiar with this sport because the father hosted the amateur matches in West Newbury. John Cena’s first steps in wrestling were confident. Using the ring name The Prototype, the young man vaulted to the top quickly. In the spring of 2001, the American won the UPW Championship in San Diego. In the winter of 2002, John held the OVW Heavyweight Championship, and in the summer of that year, Cena began his career at WWE. In the federation, he won the United States Championship and the WWE title at WrestleMania XX defeating Big Show.

In early 2003, John Cena sought the WWE Championship and chased the reigning champion, Brock Lesnar. He won the right to face off the Champion but lost to Brock at Backlash. The failure was followed by another defeat. John Cena lost Vengeance, the professional pay-per-view event, produced by the WWE. He fought against Mark William Calway, better known as The Undertaker. At the end of the year, John Cena became fan favorite after joining Kurt Angle's team. In the spring of 2004, the athlete won the United States Championship, showing good fighting defeating Big Show at WrestleMania XX.

In 2007, John Cena became the first wrestler to beat Edward Fatu. The ultimate fighting with his participation was not less fascinating than the battles with great Hogan, whom John admired in his youth. The following years, Cena repeatedly won the Championships, trailing only such wrestling legends as Hulk Hogan, Bruno Sammartino and Bob Backlund by the number of belts. John Cena became the idol of Americans and an icon of pop culture because he managed to prove his potential in wrestling and show business.

John Cena made his movie debut in the film The Marine together with Robert Patrick. The action movie premiered in October 2006 and during the first week grossed $ 7 million. After a total of ten weeks, the film made $ 18,7 million at the box office and another $ 30 million in home sales. The second significant movie was 12 Rounds. Viewers saw Cena as a charismatic policeman. The film was shot in New Orleans in 2008 and released in March 2009. The sports drama Legendary directed by Mel Damski was released in 2010. John Cena played a leading role. The film was shown in September in a few cinemas and released on DVD.

The same year, John starred in the children's movie Fred: The Movie and played a father of a teenager. The film aired on the Nickelodeon channel. In the spring of 2015, the comedy Trainwreck directed by Judd Apatow appeared in the star’s filmography, and his acting in the project received critical acclaim. He played the bit role of Steven. Amy Schumer, Tilda Swinton, and Brie Larson got the leading roles. On Rotten Tomatoes, the comedy rating reached 86%.

But in 2015, John Cena also experienced the bitterness of defeat. He lost to Alberto Del Río, competing at the WWE Championship. The athlete tried his hand at the music industry. Being a fan of hip-hop culture, John Cena recorded the debut album You Can't See Me in 2005, which made it to the Billboard 200 Charts. As a part of Wrestlemania, the singer recorded two songs with the American rapper, Wiz Khalifa.

John Cena married Elizabeth Huberdeau in 2009. They dated for several years. Elizabeth dreamed of a strong family and children, but the star, whose career went up, did not want to spend time and energy on the family. The couple broke up in 2012. After several love affairs, John Cena began a relationship with Nicole Garcia, a fellow wrestler and one of the Bella twins.

According to rumors, John Cena and Nikki Bella got engaged, but this time the star made provision for the future, building a safety net. He forced Nikki to sign a 75-page contract to ensure against trouble in case of a divorce.

John Cena has been a sports car collector for a long time. There are three dozen unique models of cars in his garage. The star can afford such a hobby because his fortune is estimated at $35 million. Cena is left handed. He loves baseball and is a fan of the Boston Red Sox.

In 2017, the athlete returned to the ring after an injury and during the Royal Rumble match defeated AJ Styles, becoming the 16-time WWE Champion. At SmackDown Live in February, John Cena lost to Bray Wyatt, who managed to defend the WWE title.

In March 2017, at SmackDown Live, John Cena and Nikki Bella defeated their rivals, the couple of James Ellsworth and Carmella, but they were attacked by Miz and Maryse. At Wrestlemania 33, Cena and Bella defeated Miz and Maryse. After the match, on April 2, John made Nikki a marriage proposal. In 2017 John Cena appeared in the film The Wall as Staff Sergeant Shane Matthews. 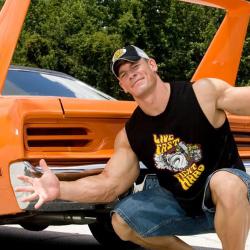