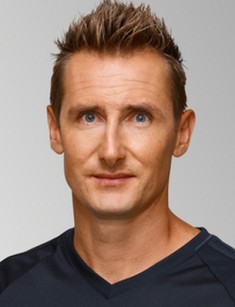 Miroslav Klose is considered to be the best goal scorer of international championships. The forward is the record holder in the number of goals scored in final games. In the last years, the man ceased to play on the field; however, he found himself in his favorite sports as the head coach’s assistant in the Germany national team. He also brings up the next generation of soccer players.

Miroslav’s historic homeland is Poland. He was born in Opole and spent there his first three years of life. Klose has the Polish and German roots, but he prefers to call himself just a European.

In the course of time, the parents who were engaged in sports visited many places in Europe. Miroslav’s father Josef Klose was also a soccer player, and the mother Barbara Jeż was a professional handball player who represented Poland in international competitions. The boy inherited his parents’ love of sports.

When the boy turned three, the family moved to France because of the father’s career. By the late 1980s, they moved to Kusel, Germany. It was challenging for the boy to get used to the new place; the teenager had problems with the German language so that he was even downgraded: the boy had to enter the fourth grade but ended up in the second one.

In his interviews, Miroslav Klose emphasized that only soccer helped to adapt to the new environment and find common ground with his peers. The boy tried to be the best in this sport, and he succeeded. Children admired Miroslav’s skills. Gradually, the boy made good friends.

Klose cherished the dream to play soccer professionally one day and probably bring Germany to glory. However, the parents insisted Klose had chosen “the real” profession, so Miroslav studied carpentry in a college when he graduated from school.

Still, the young man did not forget soccer and continued to play as an amateur. He joined the fourth-division (later the fifth-division) club Homburg. When Klose attained the full European maturity, Kaiserslautern noticed the player.

Klose was lucky. When he got to the Bundesliga, he skipped some levels of his career ladder. He played in the main team for two seasons, got to the second team for a year, and then came back to the leaders. Although Klose demonstrated the talent of a forward (fast speed and the outpacing abilities), the coach placed the player in the center. As the team’s mentor changed, Miroslav took his favorite position of the central forward.

In the first season, Miroslav scored 11 goals and became the main attacking player of the team. However, Kaiserslautern was gradually descending the tournament tables. Klose began to receive interesting offers.

In spring 2004, Miroslav Klose joined Werder. The team from Bremen who had recently became the champion bought the forward for €5 million. In the new team, the sportsman showed his splendid talent to its fullest: he proved to be the perfect forward and was named the best goal scorer of various championships.

In the first season, when the team was playing against Bayern, Klose experienced the opponent goalkeeper Oliver Kahn’s nasty character: Kahn shouted: “Don’t you get it?”, preyed on the young forward, and nipped Klose’s nose with his fingers. Ironically, the players were in the same team later.

Klose finished the season 2005/2006 with 27 goals and won the DFB-Ligapokal. With Miroslav’s assistance, Werder took the DFB-Pokal, defeated Bayern, and reached the Champions League 1/8 final.

During the FIFA World Cup-2006, Klose demonstrated his play-maker abilities and became the leader among goalers. Following his bright playing, prestigious clubs, such as Manchester United, Real Madrid, and Arsenal, started making proposals. Still, the modest German player stayed in his “home” club.

In the next year, however, he agreed to transfer. Bayern turned out to be the new place of his. In this club, the forward won the Bundesliga for the first time and scored 21 goals. Another significant event happened: Bayern and Klose got to the Champions League final.

In the Italian Lazio, the player finished his field career. The sportsman spent there five years and scored many decisive goals. Klose’s debuting goal chilled out the country’s champion Milan: the match ended with a draw. In fall 2011, fans celebrated Klose’s victorious goal in Derby della Capitale.

For the first time in the previous seven years, Lazio placed in the country’s championship thanks to Klose’s 13 goals. As a result, the club could take part in the Champions League. In spring 2013, the German conquered fans’ hearts with the penta-trick done within 42 minutes: five goals were scored to Bologna’s gate. Miroslav became the third player in the history of the club who managed to do that.

The player finished his career honorably: in his last season, he scored eight goals. He commented on his leaving:

“I decide not to play football anymore, I’ll get a nice glass of beer or wine, sit down and think of all that I have done. I was out fishing on a boat and was there on my own. I thought about the number of games I’d played for Germany – 137. If you put the digits together, 1+3+7 is 11, my shirt number. It seemed like the perfect moment to stop.”

In 2001, Klose debuted in the Germany national team and brought the victory over Albania at once when the World Cup qualification was taking place. At the World Cup-2002, the number of the forward’s fans increased. Miroslav did a hat-trick against Saudi Arabia; in each of the next two games, he scored a goal by his head.

The World Cup-2006 brought more fame. Miroslav Klose and Lukas Podolski made a powerful duo that became the German team’s primary attacking force. At the group stage, Miroslav scored four goals. He also saved the team in the 1/4 final as he scored a goal ten minutes before the end of the match.

In his third World Cup, the forward almost achieved the same results as the record holder Ronaldo: he scored 14 goals. In the next championship, he broke the Brazilian player’s record and scored 16 goals in final games. The last goal was symbolic: Klose scored it in the host team’s gate at the World Cup in Brazil.

Miroslav is a handsome and tall man (his height is 183 cm., and his weight is 82 kg.). Despite his attractiveness, his personal life is not stormy. The German forward is a good husband and caring father. There are two children in the family: the twins Noah and Luan.

Klose has no Instagram or Twitter accounts. He is a shy person who has never been star-struck. He is a man of few words with journalists and does not like to boast. Not long ago, the sportsman took an interest in rallying and even took part in races as the second driver together with the famous Mathias Kale.

Today, Miroslav has changed the field workload for the coaching responsibilities. The star forward accepted Joachim Löw’s proposal and joined the Germany national team’s coaching staff. In fall 2016, Klose had the first practice as a coach. The team was preparing for the FIFA World Cup-2018 qualification. During the World Cup in Russia, Klose was one of Löw’s assistants.

In May 2018, the ex-forward agreed to join the coaching team of Bayern Munich. Klose began to train the under-17 youth team. The contract has been signed for two years. Klose is enthusiastic about his new position and promised to do his best to meet everybody’s expectations. In his interviews, he emphasized he intended to work on the young players’ development as effectively as possible. 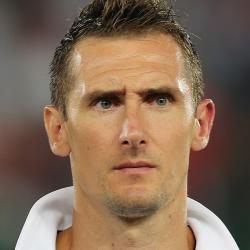