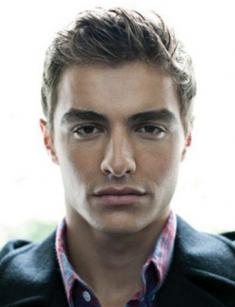 David John Franco, better known as Dave Franco, is an American film actor, screenwriter, director, and producer. Now You See Me, Warm Bodies, Charlie St. Cloud are in the list of popular movies with the participation of the actor.

Dave was born in Palo Alto, California. Dave's father, Douglas Eugene Franco, ran a business in Silicon Valley, and his mother, Betsy Lou, published her own poems and prose. Both actor's grandmothers were connected with art as well, the one owned the Verne Art Gallery, and the other wrote books for teenagers. In addition to David, the family had two older brothers, Tom and James Franco, the first of whom became interested in painting, and the second became a Hollywood star.

Being brought up in a creative environment, Franco himself was interested in art. But at the insistence of his parents, he entered the University of Southern California. Its diploma allowed the young man to become a teacher of English and literature. However, while studying in the second year, the young man visited the student theater, and then the manager of his older brother invited the young man to try himself in cinema. That's how Franco's biography as an actor began.

Dave Franco made his debut in 2006 in the family series called 7th Heaven. Then he had minor roles on in Greek, Privileged. The actor also starred in the popular medical TV series Scrubs where he played one of the nine lead characters, a medical student Cole Aaronson, the son of wealthy parents and the sponsors of the clinic. Dave's character gained a reputation as a heartthrob thanks to his charming smile and athletic figure with a height of 5'6'' (170 cm) and the weight of 149,9 lbs (68 kg). The sitcom brought the creators six Emmy Awards, and the participants got bonuses to the actor's ratings.

Later Dave played in the scene of the teen comedy Superbad and also appeared in the melodrama After Sex. In the horror film, The Shortcut the actor portrayed Mark, one of four friends who decided to check the legend of the terrible old man from an abandoned house. To the surprise of the teens, the rumors were true.

Dave accepted an invitation from the creators of the biographical drama Milk about the first openly gay politician. It was the first project where Dave worked on the set with his older brother. On the one hand, it was a great experience, and on the other - Franco Jr. finally realized that he needed to get from under the wing of James and choose his own path.

Franco Jr. left the agent whom he shared with the brother. The actor accepted the invitation to star in a mystical drama Charlie St. Cloud, a story about a young man Charlie who couldn't put up with the loss of his older brother and begins to see his ghost. The cast of the film included many stars, such as Zac Efron, Kim Basinger, and Amanda Crew. Dave played the role of Sully.

This movie was the first Hollywood success for the young man. After that successful experience, he worked in a teenage horror Fright Night and a comedy horror movie Bad Meat. In 2012, Franco's filmography was supplemented by the work in the parody thriller 21 Jump Street. The movie is about two graduates of the Police Academy with a youthful appearance who are assigned to go undercover as high school students in order to solve a series of crimes.

After the release of a black comedy Warm Bodies the public again talked about Dave as a good actor, and the thriller Now You See Me moved the actor to the star level. Finally, the audience stopped comparing Dave with his brother, and the actor could finally feel free. The sequel was released in 2016, and the next part of Now You See Me was finished.

After this success, Dave Franco decided to work only with famous directors, so the actor agreed to participate in the comedy called Neighbors. The work on the second part of the movie was finished in 2016.

Later, the actor starred in the adventure fiction series Other Space and a comedy Unfinished Business. The movie Nerve was successful for the career of Dave who starred opposite Emma Roberts. According to the plot, young people are passionate about a virtual game in which each participant must perform certain tasks. One day the game goes too far and takes a fatal turn.

On behalf of Franco, there are video projects Funny or Die and "Would you, in which Dave shoots his own relatives during family gatherings. However, you can hardly find Dave's personal account on Instagram. There are only accounts of fan clubs of the Hollywood star, where his fans willingly share actor's photos. Another hobby of Dave is the creation of scripts for short films in collaboration with a longtime friend, Brian McGinn. These projects keep being unknown to the public, as the young man is just gaining experience, but Franco has more than a dozen of such works.

Previously, Dave Franco had several serious star affairs. The most high-profile was romantic relationships with a Canadian actress Shenae Grimes, the star of the series Degrassi: The Next Generation, as well as with an American singer and actress Dianna Agron, familiar to the audience for the musical series Glee.

Franco started dating actress Alison Brie in 2012. The fans were happy that everything was good as for the personal life of their idol. Two years later, the actor surprised his fans. In the tabloids, there were unambiguous reports that Franco Jr. was gay. The paparazzi posted joint pictures of Dave Franco and Zac Efron as a proof for those rumors. Those two regularly appeared in public places, cafes, and basketball games. In addition to the news in the media, James Franco joked over his younger brother, congratulating him on the successful choice of a partner. But as it turned out later, it was only a joke. In Hollywood, James is known as a great eccentric and a lover of puns.

The news about the engagement of Dave Franco and his girlfriend, Alison Brie, dispelled wrong thoughts about the actor. The ceremony was held at the end of summer 2015. In March 2017, the couple secretly got married, and the photos from the wedding ceremony are still kept secret.

Keeping the title of Hollywood star, Dave continues to participate only in significant projects. In 2017, the actor played a lead role in the comedy melodrama The Little Hours. A servant Massetto escapes from the master's house and takes refuge in a Catholic convent, where he suddenly finds himself in a whirlpool of love. Dave Franco's wife, Alison, also played in the movie.

The second premiere of the year was the project The Disaster Artist. The film is focused on two adventurers who decided to conquer Hollywood. Dave again appeared in an acting duo with his older brother James.

Now the work on the comedy Zeroville is about to be completed and should be released in 2019. Dave Franco got the lead role in the movie. It seems that the brothers decided to resume the acting duo as they both starred in the main cast of the comedy opposite Will Ferrell and Megan Fox. Dave's older brother directed the movie. Again, the plot of the film is based on the story of an unremarkable young man who conquers Hollywood step by step.