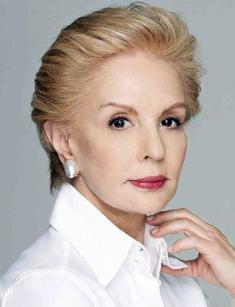 A fashion designer Carolina Herrera made her brilliant career in the United States, when she became a world trendsetter and the richest woman in America. Her biography is not a fairytale about Cinderella, who achieved success from scratch, but the story of a woman who is passionate about her favorite business more than secular parties and a luxurious life.

Maria Carolina Josefina Pacanins Nino was born January 8, 1939 in Caracas, the capital of Venezuela. The second of the four daughters grew up in the governor's family with her sisters in a multicolored tropical garden, surrounded by luxury and care. Carolina's father instilled in his daughters a strict discipline: before he made a career of the official, Guillermo Pacanins Acevedo had served as an officer of the air forces of Venezuela.

The girls' mother, Maria Christina Nino Passios, and the grandmother set an example of style and femininity in outfits. One of grandmother's hobbies was cooking. The kitchen, full of magical aromas, seemed to little Carolina a fairyland. Aromas of flowers and spices, colors of tropical nature, dresses and accessories from Balenciaga and Lanvin formed a refined taste of the future trendsetter.

The collection of dolls was dressed up by the own young mistress, who sewed outfits, copied from the dresses of the mother and the grandmother, but Carolina herself often wore white blouses, without changing her favorite outfit in adulthood. Rustling blouses with a turn-down collar were the basis of the school clothes and a suit for riding of a young aristocrat.

Her grandmother organized a tour of the fashion show in Paris for her thirteen-year-old girl, but the show of Cristobal Balenciaga impressed a teenager not much. Carolina was more interested in horses and books then. Her father gave his daughter an Argentinian horse, and her mother instilled in her the love of reading. The young aristocrat entered the Institute of Technology at the faculty of biochemistry after school and married.

The marriage of the governor's eighteen-year-old daughter was a tribute to tradition. The older generation of the family Pakanins approved the groom, a rich landowner Guillermo Behrens Tello, and the young bride had not yet had the right to vote. Carolina decided to declare her personal wishes only at the age of 25, when she divorced and returned to the custody of her parents. During this time, the couple had two daughters: Mercedes and Anna-Louise.

The aristocrat chose her second husband on her own. Don Reinaldo Herrera Guevara was familiar to Carolina from her youth and became her husband in 1968. So there was a name Carolina Herrera, which later became a well – known brand, and the first wedding dress, which was designed by the future celebrity. Light as a sea breeze and golden as the rays of the tropical sun, the bride's outfit emphasized the beauty and elegance of the woman and was on the pages of magazines.

Two daughters were born in a happy marriage, Carolina Adriana and Patricia Cristina. Carolina Adriana, or Carolina Herrera, Jr., became the first assistant for her mother in business. Later, all the daughters with their husbands merged in the family business. The mother of four children and the grandmother of six grandchildren is still retaining a graceful figure, skillfully emphasizing it. Since 1972, Carolina Herrera is on the list of the most stylish celebrities.

Implemented in the roles of a socialite, wife and mother, Carolina decides to do business. In 1980, Herrera's family moved to the United States. The longtime friends - count Rudy Crespi and Diana Vreeland, a chief editor of Vogue magazine, convinced a stylish lady to try to become a fashion designer. The first collection was shown in New York and consisted of 24 dresses. Despite dominating the image of a woman-boy in the seventies, Carolina brought to the podium femininity.

A mini-collection impressed potential customers, and a business went on. Ten people-the entire staff of the enterprise-worked tirelessly to create a full-size collection, which was demonstrated at the Metropolitan club in April 1981. On Seventh Avenue in Manhattan, a boutique was opened, furnished strictly and concisely, with a mannequin in the window, dressed in a classic black skirt and a white blouse.

Classic is eternal. Elegance, the brand embodied by designers of Carolina Herrera, is chosen by the first ladies of the USA and Hollywood stars. Wedding collections are created by Carolina with great care, because the bride should be irresistible on the most solemn day of her life.

The daughters of presidents and aristocrats walk down the aisle in a dress from Herrera, actresses and even Bella Swan from the fantastic movie "Twilight. Saga: Breaking Dawn."

At the same time, Carolina herself did not receive a professional education and she does not know how to sew, according to her own statement. But she knows how a dress should look like and brings this knowledge to subordinates. In 1987, the designer took up the implementation of a new direction. Carolina created a perfume with the smell of a favorite flower – jasmine. The first aromatic composition was followed by another thirty. The perfumes from Herrera are paired in a perfect harmony of a man and a woman of the same name.

Young fashionistas and dandies are also not forgotten by Carolina: the first collection of children's clothes saw the light in 2009, and the store was opened in 2011 in Paris where parents of kids and teenagers find outfits for children for the solemn public. Also each of the hundreds of stores of the brand offers visitors handbags, gloves and other accessories that emphasize the beauty of the outfit.

On February 12, 2018, Carolina Herrera presented a new collection of outfits for spring and summer. The spring and bright colors of the models create a joyful light atmosphere. The combination of red, lilac, indigo and emerald colors might have seemed flashy if not the designer's amazing sense of taste.

Inspired by the paintings of Flemish artists, Carolina Herrera generously decorated dresses with images of plants. Tulips and dahlias are scattered on the field of layered skirts and embroidered on the coat. Strict silhouettes of trousers and soft flowing lines of the evening dresses made of transparent chiffon and organza are already taken as an example by fashionistas and tailors.

Photos of the collection are posted on the official website of Carolina Herrera and on Instagram. Despite her advanced age, the owner of the chain of stores does not neglect the possibilities of advertising on social networks, but she tells little about her personal life, paying more attention to the coverage of creative finds.

Shortly before the fashion show Carolina said about her leaving the post of head of the brand. After 37 years of work, the creator of the label handed over the post of creative director to Wes Gordon-a talented young American designer, founder of the brand Wes Gordon. Now, in 79 years, according to the most stylish grandmothers, it is a good time to live a measured life.