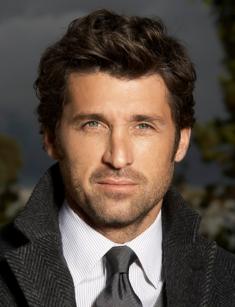 Patrick Dempsey is an American actor, best known for his role as neurosurgeon Derek Shepherd in a medical television series Grey's Anatomy. Dempsey is also known as a professional racing driver, the runner-up of 2015 in the sports car race 24 Hours of Le Mans.

Dempsey was born in Maine, a state of the northeastern United States. His hometown is Lewiston, but his family moved to the nearby towns, Turner and Buckfield, where Dempsey grew up with two older sisters. His father, William Dempsey, was an insurance salesman, and his mother, Amanda Casson was a school secretary.

Nobody could explain why the boy tended to act on the stage. When he was ten, the boy undertook initial steps. Firstly, Dempsey was interested in circus art. He even attended a particular studio, where he learned juggling and did conjuring tricks.

At the age of 15, the teenager achieved the second place at the International Jugglers' Association Championship in the Juniors category, just behind Anthony Gatto, who was considered to be the best technical juggler of all time and the future Guinness world record holder.

Dempsey said that the desire to succeed in theatre or circus field connected with dyslexia, which was diagnosed in his childhood, so the career in many other areas wasn’t available to him. Although Dempsey decided never to give up and always to intent on his improvement. In 1981, the actor had his first role in modern production, after that he was also performing in various plays for several years.

Dempsey's first major feature film role was in 1985, but his name wasn’t even added in the credits. Step by step, after minor parts Dempsey had the lead role in a romantic comedy film Can't Buy Me Love. It is worth noting the movies of the '80s and '90s - teen comedies Happy Together and Loverboy.

He appeared in a disaster movie Outbreak of 1995, where starring Dustin Hoffman, Morgan Freeman and Rene Russo. The film focuses on an outbreak of a fictional deadly and cureless virus.

In a science fiction television miniseries 20,000 Leagues Under the Sea Patrick played the role of a young scientist, who specialized in oceanics. In 1998, the actor starred as Rodya Raskolnikov in an American film version Crime and punishment, based on Fyodor Dostoevsky’s novel of the same name. After two years, Patrick featured in a slasher movie Scream 3 as Detective Mark Kincaid investigating numerous grievous crimes.

In the XXI century, the actor’s career became more flourishing. Dempsey went on to play the role of schizophrenic on Once & Again and received an Emmy nomination, and then he co-starred opposite Reese Witherspoon in a comedy Sweet Home Alabama and Amy Adams in a fantasy Enchanted.

The medical drama television series Grey's Anatomy gave Dempsey one of his most significant breakthroughs, in Russia it was known as Anatomy of passion. As the plot is, Patrick Dempsey and Ellen Pompeo, who plays Dr. Meredith Grey, have an affair, which is further developing. Thanks to these TV series, we have known many excellent actors and actresses such as Sandra Oh, Justin Chambers, Katherine Heigl, and so on.

Dempsey earned Screen Actors Guild Award and many nominations at the most prestige film festivals for the role of handsome and talented Dr. Derek Shepherd. After acting in the series for ten years until 2015, Dempsey canceled a contract with ABC channel. Derek Shepherd was shot in episode 21 of the 11th season. Fans of TV series were shocked by the death of a well-loved main character. Some of the furious viewers even threatened to put the law on the TV channel for the vanishing of their favorite character.

Patrick Dempsey was offered to shoot in another medical series Private Practice after two years of Grey's Anatomy’s premiere. The actor reunited with Hilary Swank in a drama movie Freedom Writers. A year later he casted in a romantic comedy Made of Honor as Tom Bailey, the main character falling in love with Hannah, the actress Michelle Monaghan. Tom decides to tell her his feelings, but, unexpectedly, Hannah surprisingly announces she is engaged to a man.

Patrick featured in a romantic comedy Valentine's Day in 2010. He is good at acting the roles of comedy characters, such as Tripp in a crime comedy film Flypaper where Patrick Dempsey starred with Ashley Judd.

In 2013, Dempsey had a leading role in a comedy Ushi Must Marry by Dutch production. In September 2016, Bridget Jones's Baby, another film in the franchise about the life of an amazing woman, was released, where Patrick Dempsey also appeared.

Since 2004, the new stage of the actor's biography had begun. Dempsey mastered a profession of a sports racing car driver. Sometimes he thought about finishing the career of actor and concentrated entirely on the motor rally. Nevertheless, combining acting and sports, Dempsey competed in a number of American and European motor races. He organized his team of Dempsey Racing, which appeared to be competitive in several famous sports car race of Le Mans.

Those competitions were successful. During his career of sports racing car driver, Patrick made to the podium six times, including that he took a silver in 2015. As the actor said, everything has already planned on TV and in films. However, in motor races Patrick feels every second and every moment of life because all can suddenly change at any moment.

On the eve of 2017, Patrick Dempsey called time on the career of the racing car driver. As a finale, the actor along with sportsman Mark Webber appeared in a commercial of the German Porsche. The main characters of the promo met at the airport, but even with suitcases tilted forward, they arranged a speed competition among themselves, while assuring each other that they got done with the races.

When he was 21, Patrick Dempsey married at the first time at Rochelle ‘Rocky’ Parker, who was the actress and the mother of his best friend, Corey Parker. She was 26 years his senior. During some time, she was acting for a manager for her young husband. After seven years of marriage, Dempsey and Parker divorced.

After a while, Dempsey married a second time to a hairstylist and makeup artist Jillian Fink. The couple has three children, daughter Talula Fyfe, and twin sons Sullivan Patrick and Darby Galen.

In 2015, the Dempsey filed for divorce, but the couple reconciled later in the ten months, and they called off their divorce. Firstly, they went on a romantic trip to Paris. The couple had plans for the future – they decided to adopt a child – they said in a couple interview.

Patrick has many hobbies: he collects antiques, participates in a reconstruction of the listed buildings and loves downhill skiing.

Patrick uses his good-looking appearance in different brand’s commercials. He was the face of varying perfume lines of Versace and L'Oreal, advertised for Silhouette sunglasses and even promoted optical cable of one Mexican company Cablemas, where commercial focused on macho image.

The twin sons of Dempsey also managed to light up in a photo shoot for the Italian Vogue Bambini. Together with the daughter of Milla Jovovich, Ever, Darby and Sullivan they starred as the superheroes. The children felt relaxed in front of the camera, and therefore the photos turned out to be joyful and bright. A caring father posted some of the pictures on his Instagram page.

Patrick Dempsey still is on TV feature films, adding several works to his filmography in a year.

The actor also featured in a television miniseries The Truth About the Harry Quebert Affair and a detective story The Postcard Killings planning to release in 2018.

Patrick Dempsey is going to play a leading role in an upcoming fantasy movie Enchanted 2, which is now preparing for the shooting. The premiere is also expected such films as a comedy Wonderful Tonight and a criminal series Micronesian Blues, where Dempsey also has leading roles.