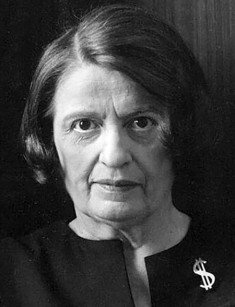 Ayn Rand is an American writer from Russia. Her real name is Alisa Zinovyevna Rosenbaum. The reader knows her novels "Atlas Shrugged," "The Fountainhead," "We the Living." The woman developed a philosophical system of Objectivism. One day she came to America with fifty dollars in her pocket and a typewriter in her suitcase, and nowadays more than 500,000 copies of her books are published around the world annually, and the total circulation has long exceeded 30 million.

At first, the girl’s father was a pharmacy administrator, but in 1914 became its co-owner. The family lived in a spacious apartment right above this pharmacy.

Alisa lived in abundance, and she studied at the prestigious Stoiunina Gymnasium. At the age of 4, she learned to read, and in school, the girl began to write her first stories. At the age of 9, she realized that she dreamt of becoming a writer in the future. The girl saw the enthusiasm of her family during the February Revolution and understood the scale of the problem during the October Revolution.

In 1917, her father’s pharmacy was confiscated, and the family had no choice but to move to the Crimea. Alisa graduated from high school in Yevpatoriya. But soon the Bolsheviks also were there.

When the girl was 16, the family returned to St. Petersburg. Alisa entered the department of a social pedagogy of the Petrograd State University. The studying lasted three years, the faculty combined three sciences - history, law, and philology. At the university, she was introduced to the writings of Nietzsche, who had a significant influence on the young lady. In 1924, she graduated from the University. Although there is information that the girl was expelled because she previously belonged to the bourgeois society.

No wonder that the policy theme is the keynote of Ayn Rand’s works. Many of her heroes fought against the tsarist autocracy or communist power.

In 1925, her first work "Pola Negri," the story about the film actress's creative path, was published. The same year, she was granted a student visa and left for the United States. At first, she lived with relatives in Chicago. But six months later she moved to Los Angeles.

She almost did not speak English and had a small suitcase with personal belongings and a typewriter. When she arrived in the American land, she decided to take a pseudonym. She chose a simple name of Ayn, and Alisa did not think about the surname for a long time, using the brand name of her Remington Rand typewriter.

Her parents stayed in Russia, in Leningrad. They died during the siege of the city in the Second World War. Her sister Natalia passed away in 1945, but Ayn could invite Nora, and she immigrated to the United States. However, soon the woman returned to the Soviet Union and lived in Leningrad until her death in 1999.

Alisa did not come empty-handed in the USA. She wrote four screenplays in Russia. Therefore, her goal was to get to Hollywood. However, soon she began to work in Hollywood as an extra. But her scripts were rejected. In 1927 the studio, where Ayn Rand worked, was closed. The woman worked for a time as a waitress, a salesperson, a dresser.

In 1932 she managed to sell the script to Universal Studios. The company bought her work "Red Pawn" for $ 1500. At that time, it was a reasonable sum. The money helped Ayn Rand concentrate on writing books.

In 1933 she finished her first play "Night of January 16th". It was even produced on Broadway butthe play did not have success. andSo, they soon removed it from the list of productions.

Later, Rand immersed herself in writing the novel "The Fountainhead." She created this work for four years. The writer was sometimes so devoted to the process that she typewrote for 30 hours without sleeping or eating.

But the result was worth it. Critics highly appreciated “The Fountainhead," the book was on the list of national bestsellers 26 times. Although initially, all refused to publish the manuscript. Some said that the plot is too contradictory, too intellectual and not aimed at the general public. Only the Bobbs-Merrill Company agreed to publish Rand’s book.

In 1949 they shot the film The Fountainhead in Hollywood. Gary Cooper played the main character of the ideal man, Howard Roark. Of course, the success of this work helped Ayn Rand work even harder. In 1957 she published her main novel "Atlas Shrugged." She wrote it for 12 years.

The book tells about freedom, selfishness, and hypocrisy of modern society, as well as moral values. According to a survey, "Atlas Shrugged" is the second most influential book for Americans, after the Bible.

When the book became a bestseller, the writer republished her early works. For example, it was the novel "We the living." However, the writer made some adjustments to the text. According to her, she changed a little bit. Nowadays the first edition of the book is not easy to find, and it is of great value.

After the publication of "Atlas Shrugged," Ayn Rand wrote only favorite social issues books. She devoted the rest of her life to the system of philosophy.

For the first time, Alisa Rosenbaum fell in love in St. Petersburg. Lev Borisovich Bekkerman, a graduate of the Leningrad Institute of Technology, attracted her attention. He inspired Rand to create the image of Leo Kovalensky in the novel "We the living." Bekkerman was executed on May 6, 1937.

One day, the woman saw actor Frank O'Connor on the set. Later, she said that it was her ideal man. In 1929 they married. In 1931 Ayn Rand gained American citizenship. They lived in marriage until his death. The man died in 1979.

According to the writer, her husband was her faithful friend, editor, and partner. However, it did not prevent her from having a love affair with young Nathaniel Brandon. He shared her philosophy and was a follower of the writer. The young man was 24 years younger than Rand. It is noteworthy that Frank knew about this relationship because it lasted 13 years.

Ayn Rand died on March 6, 1982, in her own house in New York. The cause of her death was heart failure. The woman was buried at Kensico Cemetery.

Since she had no children, Leonard Peikoff inherited her estate. Three years after the death of the writer, the man founded the Ayn Rand Institute: The Center for the Advancement of Objectivism. 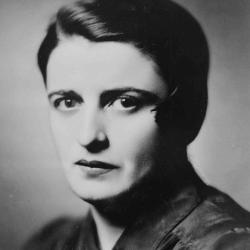