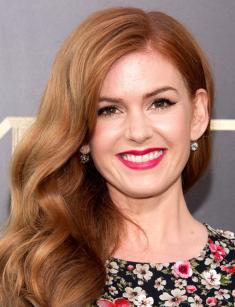 Isla Lang Fisher is an Australian actress of Scottish descent. She achieved fame for her roles in Wedding Daze, Now You See Me, The Great Gatsby, and Wedding Crashers. Besides, in her teen age she published several books for children.

She was born in Arabian country Oman, but was raised in Australia. Her father, Brian Fisher, worked as a banker in Oman for the United Nations at that time and carried on a banking structure in Muscat, the capital of Oman. After several months, the Fishers moved back to their hometown of Bathgate, Scotland. She was named after one of the British islands. Later, Fisher and her family moved to Perth, Australia, and settled down there.

It happened when she was six years old. Today Fisher remembers with pleasure the old days of her childhood with a "very outdoorsy life." Four brothers and the girl often went tramping, discovered the beauty of nature and learned something new. Fisher made her first on-screen appearances in commercials on Australian television at the age of nine, and later on television plays.

Finishing Methodist Ladies' College, where actress paid attention to drama school, Isla moved to Paris and attended L'École Internationale de Théâtre Jacques Lecoq, where she studied clown, mime and commedia dell'arte. The next step of her life is London. She appeared in the London theatre production Cosi in the Royal Opera House and also toured in the musical Summer Holiday.

By the way, with the help of her novelist mother, at the age of 18 she published two novels meant for a teenage audience titled Bewitched and Seduced by Fame. They were popular with Australian kids. Now all her family lives separately from each other: her father lives in Germany or Nicaragua in turn; her mother and brothers – in Greek Athens, and the actress moved to Los Angeles near Hollywood long time ago.

At an early age, Fisher played roles in popular children’s television shows Bay City and Paradise Beach. Afterward, she played the role of Shannon Reed on the Australian soap opera Home and Away. As a result of her excellent acting, Isla received a Logie Award nomination for Most Popular Actress for her role. The first success in Europe came to Fisher after her appearance in the German horror film Swimming Pool and an adventure comedy Scooby-Doo, where she played the role of Mary Jane suffering from dog allergy. For the role, she wore a blonde wig because Daphne Blake was supposed to be the only redhead in the film.

Fisher's breakthrough came with the comedy Wedding Crashers after the MTV Movie Awards, where she appeared in the credits with Owen Wilson, Vince Vaughn, Christopher Walken, Rachel McAdams, and other celebrities.

Thanks to that movie, Isla Fisher got one special award: while promoting Wedding Crashers, she was officially crowned the 1000th guest on Australian talk show Rove.

Fisher obtained her first leading film roles in the romantic comedy Wedding Daze, comedy-drama Definitely, Maybe, romantic comedy Bachelorette, and Confessions of a Shopaholic. It is interesting to note that Confessions of a Shopaholic had received lukewarm reviews from critics. Despite the critical response, the public went to cinemas with great relish, and the film took 4th place in film distribution. Fisher received Teen Choice Award nomination for the role of Rebecca Bloomwood.

In 2012, Fisher worked as a voice actress, she voiced the Tooth Fairy in the movie Rise of the Guardians. The actress voiced Beans in the 3D animated comedy Rango the year before, and also voiced Dr. Mary Lou LaRue in the computer-animated comedy Horton Hears a Who! in 2008.

The horror film Visions and thriller Now You See Me had great success, where Fisher shooted with Jesse Eisenberg.

Fisher found mainstream recognition in 2013, with the role of Myrtle Wilson in a highly successful film - The Great Gatsby based on F. Scott Fitzgerald's novel of the same name. The actress became a screen lover of Joel Edgerton. Isla managed to work on the set with Leonardo DiCaprio, Tobey Maguire, Carey Mulligan, and others.

The actress featured in an action comedy movie Keeping Up with the Joneses and psychological thriller Nocturnal Animals which received several high-prestige awards and the Grand Jury Prize of 73rd annual Venice International Film Festival.

The plot is about of an art gallery owner Susan Morrow who receives the manuscript for a novel penned by her ex-husband along with an invitation for dinner during her husband's upcoming business visit to Los Angeles. Susan becomes consumed by the novel, which is both dedicated to her and named Nocturnal Animals. Isla worked with Amy Adams, Jake Gyllenhaal, and other stars. There we have an interesting fact that Amy Adams looks so familiar with Isla Fisher because of their formal resemblance.

In the movie Keeping Up with the Joneses the actress was a screen wife of Zach Galifianakis. The movie follows a suburban couple becomes embroiled in an international espionage plot when they discover that their seemingly perfect new neighbors are government spies.

In 2016, Isla Fisher said on TV show Today that the authors of the comedy Wedding Crashers planned to shoot the second part of this movie. However, the details of the future project are unheard.

Before marrying Cohen, Fisher dated Australian actor Shane Ammann, and after that, she also dated English actor Darren Day for about two years.

In 2002, Isla first met Cohen, one of the best comedians of Britain, at a party. Since then, her personal life had changed. They were dating for eight years and later got married in 2010. The wedding ceremony took place in the most romantic city in the world – Paris – and it was held in European traditions.

Although Isla had no connections with the Jewish people, she became a Jewish convert at the insistence of her husband’s family long before the wedding. At that time she was traditionally given the name Ayala, which means Doe in Hebrew.

It’s difficult to realize, but this beautiful and elegant woman is a mother of three children. The first daughter named Olive Baron Cohen, Fisher gifted to her husband three years before the wedding, and second daughter, Elula Lottie Miriam Cohen, five months after the wedding ceremony. The youngest child, Montgomery Moses Brian Baron Cohen, was born on March, 2015. No pregnancy stop Isla to shoot in movies and be a good mother.

The actress has many followers on Instagram, and she likes to share her private and backstage photos.

On June 2018, the comedy movie Tag was premiered; where the actress played the main character.

The story is about five friends playing in a new version of the tag game since the first grade every year. Guys risk everything: their career, relationships, and even their lives. But this year, the game coincides with the wedding of their only undefeated player, which should finally make him an easy target. But he knows they're coming and he's ready.

The Beach Bum is an upcoming American comedy film with post-production status where we can see this adorable actress in a leading role. Isla played with Matthew McConaughey, Snoop Dogg, Zac Efron, and others.

Besides, Isla Fisher is preparing for shooting in the drama movie The Starling with Keanu Reeves.

The actress also shoots in the movie Desperados. She plays the role of a girl who sends an obscene email to her boyfriend. And then, she gets to know that her boyfriend is in a coma. She has to go to the south border to intercept her message before her lover doesn’t recover her senses.