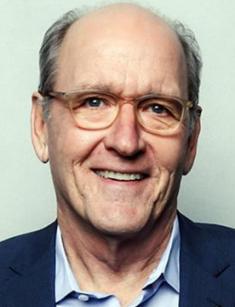 Richard Jenkins is a famous American actor. Although Richard began pursuing an acting career early, he became famous only at the beginning of the 2000s, appearing in the series Six Feet Under. In 2009, he received an Oscar nomination for his role in the film The Visitor.

The future actor was born on May 4, 1947, in the town of DeKalb. The boy's mother, Mary Elizabeth, was a housewife, and his father, Dale Stevens Jenkins, worked as a dentist. In his younger days, Jenkins worked as a linen truck driver for a while.

The young man earned a degree in drama from Illinois Wesleyan University. Then he moved to Rhode Island. There, Richard joined the Trinity Repertory Company and performed on the stage for 15 years. From 1990 to 1994, he served as its artistic director.

Richard Jenkins liked working in the theater, but he wanted to play in films. In 1975, the actor took the first steps towards changing his career.

That year, he played a bit part in the TV series Great Performances. Since then, the man has regularly appeared in films and television series, portraying diverse characters. The celebrity’s filmography includes about a hundred projects, in which the actor has shown that his talents are limitless.

So, in 1996, Jenkins proved himself to be a brilliant comedian in the film Flirting with Disaster. The role of a father who is looking for his biological parents earned the actor a nomination for the Independent Spirit Award.

Richard participated in the creation of the TV series Miami Vice, Spenser: For Hire, Queen, Ally McBeal, and others. But the actor became world-famous after appearing in the project Six Feet Under. Jenkins played Nathaniel Fisher. Richard's hero appeared either as a ghost or in the memories of other characters. The cast was nominated for the Screen Actors Guild Award in 2002.

Richard Jenkins became famous for collaborating with several directors. So, he appeared in The Man Who Wasn't There, Intolerable Cruelty, Burn After Reading directed by the Coen Brothers. The Farrelly brothers invited the actor to the projects There's Something About Mary, Me, Myself & Irene, Outside Providence, Say It Isn't So.

In 2007, Jenkins starred in the drama film The Visitor. The actor portrayed the hero who lost his wife. After his beloved wife's death, Walter Vale lost the meaning of his life. But all changed when two illegal immigrants appeared in the professor's life. Vale decided to prevent the deportation of the immigrants from the country by all means. For his brilliant acting, Richard was nominated for the Academy Award for Best Actor.

In 2011, Richard played the father of Justin Timberlake's hero in the comedy film Friends with Benefits. It was not easy since Jenkins had to portray a man who has Alzheimer's disease. The same year, the actor appeared in the horror movie The Cabin in the Woods, and critics praised the film.

Besides, he played in the movie The Rum Diary with Johnny Depp. Critics were polarized on their view of the film. Viewers also gave mixed reviews. In 2012, a young star, Elizabeth Olsen, appeared on the screen with Jenkins in the movie Liberal Arts. Richard played in the action movie Jack Reacher, alongside Tom Cruise. In 2013, he voiced Bobby, a store owner, in the cartoon Turbo, and appeared in the action movie White House Down.

2014 was marked by the release of three films with the participation of Richard Jenkins. These are the movies Lullaby, God's Pocket, and Olive Kitteridge. For his work in the last movie, Richard was praised by critics and won the Primetime Emmy Award. In 2017, viewers saw the actor in the fantasy action movie Kong: Skull Island. Jenkins landed the significant role of the Senator.

Richard Jenkins has long been happily married. In 1969, the actor married Sharon R. Friedrick. The couple has two children: a daughter, Sarah Pamela, and a son, Andrew Dale.

Jenkins and his wife attend social events, as evidenced by the photo on the Internet.

Nowadays, Richard Jenkins is an in-demand screen and stage actor.

In December 2017, the film The Shape of Water directed by Guillermo del Toro was released. The movie received seven nominations for the Golden Globe Award and thirteen nominations for the Academy Award. Richard Jenkins played one of the title characters. He portrayed a gay artist, Giles, who lived a solitary way of life.

Jenkins' hero is a friend of the title character, Elisa, who falls in love with an amphibian man. But scientists are planning to kill and dissect her beloved man. Then Elisa asks a friend to help her save the amphibian man. The hero faces hard choices as he can come out of his shell or live a life full of fear.

Richard Jenkins has a net worth of $8 million.