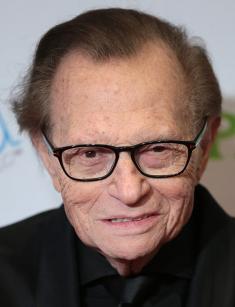 Larry King is America's most popular TV host. He managed to interview the most famous statesmen, businesspeople, actors, and athletes. He is a truly legendary journalist and showman, with his own image, suspenders and horn glasses.

The TV host's real name is Lawrence Harvey Zeiger, and Larry King is just an acquired one. Larry was born on November 19, 1933, in New York City. His parents, Jennie Gitlitz and Aaron Zeiger, were Jewish immigrants from Ukraine and Lithuania. Larry had an older brother, Irwin, born in 1932, but when he died at the age of six of acute appendicitis. Soon Larry had a younger brother Marty.

Larry is proud of his background, even sometimes calls himself a "SuperJew." According to him, he is a real Jew and loves Jewish food, humor, and culture. He likes that Jews value family and education so much, which is close to him.

The boy barely finished high school and did not go to college. The reason is that Larry's father died early. He was only 44 years old when he had a heart attack. The family was in financial difficulty, so Larry had to work. As a child, he dreamed of popularity and work at the radio station, and overnight he had to give up his own dream. Larry worked anywhere he could get a job.

When Larry turned 18, he moved to Miami. There the young man got a job on the radio station WAHR, where he first worked as a cleaner, and sometimes performed small tasks from higher employees. But by a happy coincidence, his dream was destined to come true. One day one of the station's announcers abruptly quit, Larry was suggested to replace him temporarily. On May 1, 1957, people for the first time heard the voice of a man who would soon become the most recognizable in America.

His radio debut impressed the management, and he was immediately offered a permanent job. That's when he had to give up his real name in favor of King surname. The general manager claimed that Zeiger was too difficult to remember and pronounce. The young man called himself Larry King. He later said that at that moment he caught the eye of a flyer of King's Wholesale Liquor.

In December 1971, King was accused of grand larceny by his former business partner. Larry immediately lost his job. All charges were dropped in 1972, but the reputation had already been tarnished. Moreover, during the trial, the man got into debt.

But soon the audience forgot about this unpleasant incident, and Larry King continued to work hard. At Mutual Radio Network, King launched a night show where he interviewed guests and then answered the radio listeners' calls with them.

After a while, Larry received an offer from media tycoon Ted Turner and joined CNN. Talk show Larry King Live was first released in 1985. The program was filmed for 25 years. It even got into the Guinness World Records as the longest program that existed on television with the same host.

During his journalistic career, Larry King had conducted over 60,000 interviews. Donald Trump, Bill Clinton, and even Vladimir Putin visited his program.

Larry King's image was an accident. In the studio where Larry was interviewing, it was unbearably stuffy, so the man took off his jacket and underneath it he had suspenders. And after this gesture, the crew noticed that the guest, seeing the suspenders, could to relax and tune in to the conversation. And Larry was wearing glasses to look presentable, and at first, they weren't even dioptreated.

In June 2010, King announced that he was leaving the show, with Arnold Schwarzenegger as his last guest. As Larry said, his most favorite guests were Frank Sinatra and Bill Clinton. According to him, they had a great sense of humor, and they were talkative.

Larry King shared his experience as a journalist in his book How to Talk to Anyone, Anytime, Anywhere: The Secrets of Good Communication. It has a lot of advice on how to conduct a conversation. By the way, this is not the only book Larry wrote. In 2009, the book My Remarkable Journey was published.

The showman also published several books about heart disease. This topic was close and clear to him, as in 1987 he suffered a heart attack. Larry King often appears in movies playing himself. He had participated in voice acting for cartoons like Shrek, Bee Movie, and Simpsons.

Larry King is known for his love and penchant for formal marriages. In total, the showman has had eight wives. Larry first got married when he was 19. His spouse was a high-school sweetheart Freda Miller. No one approved this marriage, so a year later they divorced. For nine years, Larry King enjoyed a single life. The second wife of the showman was Annette Kaye, but the marriage was brief and ended the same year. The woman was pregnant; they had a son, which Larry did not recognize for a long time.

Soon the journalist married for the third time. This time it was Alene Akins, a Playboy Bunny. Larry even adopted her child. But a year later he divorced again. His next wife was his colleague, Mickey Stuphin. The marriage didn't last long either.

After a while, he married his ex-wife Alene Akins again. This time their marriage lasted for three years, but in the end, they still broke up.

The sixth wife of the showman was a mathematics teacher Sharon Lepore. Larry's seventh wife was a businesswoman Julie Alexander. The journalist said that the woman immediately struck him with intelligence.

In 1997, Larry King married to actress, TV hostess, and singer Shawn Southwick. The woman is 26 years younger than Larry. It is noteworthy that Shawn gave birth to two sons, Chance and Cannon. In 2010, it was reported that the couple decided to divorce. But in the end, the couple decided to keep the family and stopped the divorce process.

In 2017, the journalist was diagnosed with lung cancer. But the disease was detected at an early stage, so Larry underwent a surgery with the removal of 20% of the lung and thus saved the life of the TV host.

By the way, King has never led a healthy life. After the broadcast, Larry regularly drank a glass of whiskey and smoked up to four packs of cigarettes a day.

In 2017, he starred as a cameo in the movie American Satan.

Larry King wishes to be cryonically preserved upon death. He announced his post-mortem plans on CNN.