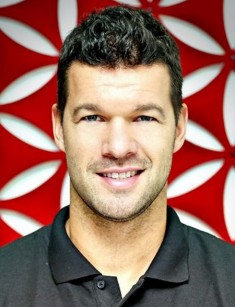 Michael Ballack is the legendary midfielder who also took attacking and defense positions. He demonstrated top results in any center position and used both feet efficiently to score in his opponent’s gate. Coaches and players admired his universal playing skills.

Michael was born in the German town Görlitz on September 26, 1976, into the family of the professional soccer player. This fact probably shaped the boy’s destiny: he inherited the love of soccer genetically.

By seven, small Michael dreamed of being the most important player of top teams. He trained in the soccer club Chemnitz; it took two hours to get to the field from home, but the young player proved to be stubborn and goal-oriented; these traits helped him achieve the success.

At 18, the young man signed the first professional contract with Chemnitz. Ballack debuted in the first game of the season as the first eleven member. Several matches later, it was evident the player took the rightful position: Michael Ballack turned out to be the leading player of the club.

In 30 games, the sportsman scored ten goals: it was a good result for a defender. The coach Otto Rehhagel noticed the talented player, and the young man got to Bundesliga. Ballack joined Kaiserslautern and became the champion of the country in 1998.

In 1999, Michael Ballack became the key player of the team. Kaiserslautern took part in the Champions League but failed to reach the semi-final due to the loss to Bayer. Michael participated in 55 matches and scored four goals in Kaiserslautern.

In a while, he transferred to Bayer. The club paid €4 million for the player, and the decision was right. In 2000, Bayern won the Bundesliga silver medal; Ballack’s contribution was significant.

Experts consider the 2001-2002 season to be the golden moment of the defender’s career: he scored 25 goals. Overall, Ballack played 107 games and scored 38 goals for Bayer. At this period, he became the UEFA Club Midfielder of the Year.

In 2006, Chelsea made a tempting offer; the defender became the free agent, signed the contract, and left Germany for Great Britain.

Playing in the Premier League, the new sportsman managed to lead the team to the second place in 2007 and 2008, although he did not play often because of his severe trauma. In 2007 and 2008, Chelsea gained the FA Cup. Ballack spent 115 games in Chelsea and scored 23 goals.

Soccer was Ballack’s destiny. Apart from his club career, Ballack was the German national team member during the Euro-2000 and 2004. After his second UEFA European Football Championship, Ballack became the captain of the national team. The persistent and experienced player, Michael led his team to the final of the FIFA World Cup-2002. However, Brazil defeated Germany.

Many commentators believed the final game would have been different if it had not been for Michael Ballack’s injury. The sportsman’s zeal could only be admired. In 2008, the Germany national team won the silver medal in the UEFA European Championship; the captain contributed to this achievement substantially. Ballack played 93 matches for his country and scored 41 goals.

In 2012, when he played for Bayer Leverkusen, the defender announced he finished his field career. The player’s severe injury made the impact on his health.

Due to his heights (189 cm. with the weight 90 kg.), it was more and more challenging for the sportsman to play and show the same results. Michael Ballack left the professional sports as the winner of numerous titles and awards. His name went down in history of the modern soccer, and fans all over the world remember and respect him.

Simone Lambe used to be Michael’s Ballack’s wife. For a long time, the couple did not marry officially. Three children were born in this family: Louis, Emilio, and Jordi. However, Simone and Michael could not save their marriage and divorced.

Today, Ballack has a new girlfriend.

Since 2015, Ballack has been dating Natacha Tannous, the Parisian with Lebanon roots. He proves to be a steady person interested only in one woman, although he does not lack women’s attention.

In fact, the sportsman’s choice is clearly understood. Natacha Tannous is the outstanding woman who has made the career in banking: she represents large organizations. She used to be the Goldman Sachs regional director: this investment company is famous all over the globe.

Together with his beloved one, Michael Ballack frequents the Germany national team’s games. The former sportsman analyzes the actions of the teams where he used to play and assesses modern players’ results.

It is not an easy task for an athlete to leave the sphere where he had been working for the major part of his life. Michael Ballack cannot imagine his life without soccer. On his Instagram page, he often posts photos from his games.

Some fans claim Ballack and the Hollywood actor Matt Damon look alike. However, Michael has become popular for other reasons.

Today, Ballack’s fortune is estimated at $25 million. The sportsman earned this money collaborating with the world’s top clubs. As he stopped playing soccer, he became a businessman and appeared in Adidas ads.

The man is notable for his even temper and the love of family traditions and pets: he loves his dog Sancho.

Michael’s grandfather had always been his most important fan.

After Ballack finished his official career, he has not quitted sports. Often, he may be seen on a golf field or basketball court. Michael is fond of Mercedes cars, Italian cuisine, and traveling.

Throughout his career, Michael Ballack demonstrated his top player qualities. Together with his teams, he won the FA Cup and placed second in the UEFA European Championship; he also won the DFB-Pokal. The range of his achievements is remarkable. 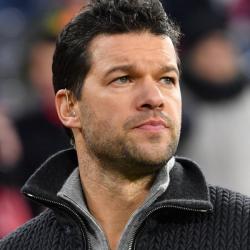