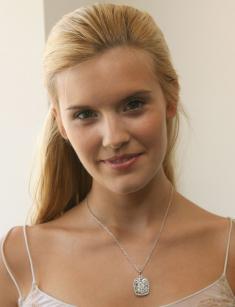 Maggie Grace is the creative pseudonym of the actress Margaret Grace Denig. She shortened the first name and removed the last name to make it sound brief and memorable.

Maggie was born in a small Ohio city on September 21, 1983. She lived there until she was 16 years old. There were three children in the family – Maggie has a brother and a sister. Parents of the future actress were engaged in the jewelry business, owned a small firm. Maggie studied at school and enjoyed participating in amateur performances.

She was 16 when her mother and father divorced. By mutual decision, Maggie's sister and brother stayed with her father and she and her mother moved to Los Angeles. The girl left school because she knew that she would become a popular actress. Financial difficulties, lack of housing, other domestic problems in the new place did not scare her. Maggie Grace began taking acting lessons in the studio in Los Angeles. The training was not in vain because she made her debut on the big screen at the age of 21.

Acting biography of the actress developed rapidly and unpredictably. Maggie came to the casting of a new project. No one expected that Lost will be a cult series and will receive prestigious Emmy Awards and a Golden Globe. Grace passed the selection and got the role of the passenger flight 815 Shannon Rutherford. The audience began to recognize the actress after this role. The series was filmed in Hawaii. Maggie became friends with other actors during the filming.

The next project with the participation of Maggie Grace was the horror movie The Fog, which did not have commercial success. And reviews of critics were unflattering.

2007 became a landmark in the career of the actress. Maggie Grace starred in the action movie Taken. The writer and producer of the film, Luc Besson, who aroused the interest of critics and viewers. Besides, Grace's partner was her favorite actor Liam Neeson, who played her father.

The hero of Liam Neeson is a former CIA agent, who works in the security business and tries to improve relations with his daughter after the divorce. Life is almost getting better when a girl is suddenly kidnapped during a trip to Europe. The man finds out that the Albanian dealers of girls are involved in the kidnapping. A retired agent is sent in the footsteps of his daughter to save the girl with his connections and skills.

The next role strengthened the popularity of Maggie Grace: she starred in an adventurous action movie Knight and Day, where she played the informer. Then there was another thriller of Luc Besson, Lockout, in which the actress discovered new facets of her talent.

Besides, the actress joined the crew of the scandalous comedy-drama Californication with David Duchovny in the main role. Maggie Grace played only in the sixth season of the series but the actress got the role of a girl with whom the protagonist had a serious relationship. The characters meet in a drug hospital and the heroine is a groupie and a former nun.

Maggie Grace appeared in an episodic role in another popular TV series Masters of Sex. It is about scientists, who researched human sexual life in the 1950-60 years.

Luc Besson invited Maggie to star in the second film of the trilogy Taken, where the girl had much more scenes. And a third film with the actress followed by for a second one. The third film ended the trilogy.

Maggie Grace isn't married. The actress was thought to have an affair with Ian Somerhalder during the filming of the project Lost. If there was a relationship, it was short because they stopped appearing together soon after the shooting.

Maggie attributed the affair with Blake Mycoskie, the shoe magnate. The actress went with him on a date several times but they did not have a marriage.

The actress always believed that she would meet a man, who she will love very much: such a man was the film director Matthew Cooke. After several years of their relationship, the lovers got engaged in February 2015. But they did not have a wedding. The actress and director broke off the engagement and broke up.

In 2016, the actress began dating the entrepreneur Brent Bushnell, the founder of Two Bit Circus. A year after the beginning of their affair, the lovers were married. The actress received the proposal of marriage in February 2017. Instead of commenting on this news, the actress posted the photo, in which Maggie hugs the future groom on "Instagram." It was enough for the fans to start congratulating the actress.

The event was held on May 28, 2017, in California. The wedding was quiet and their guests were only family and close couples.

Maggie Grace does not like to share the news from her personal life, so no one expected from the actress a pompous and luxurious wedding with fellow actors and journalists. The actress does not show her personal life. And though it repeatedly generated absurd rumors about the relationship of Grace, the actress continues to adhere to this line of behavior.

Maggie didn't make an official announcement about her wedding. Journalists found out about the wedding from sources close to the couple.

In 2017, the actress performed the main female role in the dramatic film Aftermath. The heroine of the actress is Christina and the main characters of the film were the citizens of Russia, although the film was shot in Columbus (Ohio). This feature of the film appeared in favor of reliability. The movie is based on real events. Maggie Grace has an estimated net worth of $12 million.

The film tells about the builder Roman Melnyk (Arnold Schwarzenegger), the prototype of which was a real man, the architect Vitaly Kaloyev. The movie begins with a terrible plane crash. Two aircrafts faced because of the error of the air manager. Roman lost his wife and daughter in the crash and although the court acquitted the dispatcher, the man decides to achieve justice and, if necessary, even kill the guilty.

After the release of the film, Vitaly Kaloyev said that the movie changed the key details. For example, the air traffic controller repents and blames himself for what happened in the film, the manager behaved arrogantly and did not even want to apologize, which was the motive for the murder in reality.

Also, in 2017, the actress appeared in the movie with elements of the detective drama The Scent of Rain and Lightning. A film is about a girl, who finds out that her parents ' killer was released from prison.

In 2018, the actress played a major role in the action movie The Hurricane Heist along with Toby Kebbell. There is a company of reckless robbers in the center of the plot of the thriller, who plan to rob the US Treasury, using the riot of the elements as a cover after learning about the hurricane.