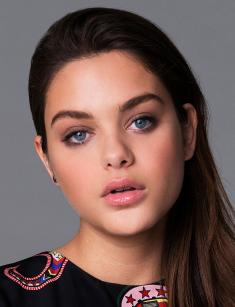 The actress Odeya Rush has really rushed into the world of show business and at once attracted attention. And the surprising similarity in the appearance to her colleague Mila Kunis generated lots of rumors around the actress. Though Rush didn't pay attention to it and with confidence opened herself the way to big cinematography with her own efforts. After the release of the blockbuster Goosebumps, in which the actress played the leading character, she began to receive a lot of invitations to take part in the shootings from the eminent movie directors. So, we can say with confidence that the new star lit in the world of Hollywood cinematography.

Odeya Rush was born on the 12th of May, 1997 in the town of Haifa in Israel. The unusual name of the girl means "Thank God" in Hebrew. Except for Odeya, there were six more children in her family – two elder and four younger brothers. The actress noticed more than once that life with her brothers has toughened her up and taught to defend her own opinion. And at present, she perfectly achieves her goals on the way to which she easily copes with the difficulties.

During her biography, the actress had lots of relocations. As soon as Odeya turned nine, her family decided to move from Israel to the USA, to the State of Alabama. Then the girl’s father was offered a highly paid position of the security consultant.

During the first years, the future actress studied at the Jewish school. After that, her family moved to Midland Park. Here the girl received secondary education at the ordinary school. In 2013 the actress relocated to Los Angeles to be closer to Hollywood where the name of the girl was already known to the public.

It’s hard not notice Odeya Rush even though she isn't tall – 163 cm. The girl has expressive, beautiful facial features and harmonious tiny figure. At the same time, the weighs 55 kg. It’s worth noting the interesting fashion style of Odeya. For the events she prefers contrast dresses, combining boyish fun with femininity. It looks very elegant.

Already in childhood, the girl showed her interest in the theater: she wrote plays herself and staged performances for her family. The model agencies noticed the girl’s charming appearance quite early, and at the age of she already took part in the advertising campaigns. At this time the girl was working with Gap, Guess, and Ralph Lauren brands.

The young star received her first remarkable role in the comedy series. You're your Enthusiasm. She got the role of the first love of the leading character. During the audition, the pretenders were given notes with the task. Odeya received the sheet of paper with the inscription: "Pretend that you're playing strip poker." The young girl didn't imagine what she could show and asked her father for advice. As a result, Odeya was the only one who managed to make laugh her partner on the movie set, and she received the role.

Odeya performed one of the main roles in the movie The Odd Life of Timothy Green which came out in 2012. In this picture, she worked with such famous artists as Jennifer Garner and CJ Adams. After the release of the picture, the name of Odeya Rush was included in the list of the best beginning Hollywood actresses. Everybody began to say at once that the girl would have an outstanding career.

And, apparently, the expectations were destined to happen. So, the year 2014 became a breakthrough for Odeya. She managed to receive the leading role in the movie The Giver. On the movie set, the girl played with high-ranked stars: Meryl Streep, Jeff Bridges, Alexander Skarsgård.

However Odeya Rush played a role which became a breakthrough in 2015 in the movie Goosebumps. She was lucky to embody the character of books written by R.L. Stine - Hannah. According to the plot of the film, the girl's boyfriend accidentally opens the path to our world for the monsters from the literary works of Stine. In such a way, the small town, where the characters live, turns into the real hell. The favorite actor of the spectators Jack Black performed the role of Odeya’s father.

The same year the young actress got Breakout Star award. The actress assures that she doesn’t have plans to take part only in the horror movies and pictures based on the games. In 2016 Odeya Rush showed herself to Hollywood as a director. She became the producer, director, and scriptwriter of her short-length movie Thanks.

After the successful release of the movie, the artist begins to have fans, who are interested in the personal life of their favorite artist. The image of the actor is surrounded by the aura of the questions demanding immediate answers. So, Odeya Rush was repeatedly said to have love affairs with her partners on the movie set.

According to the latest rumors, the girl has relations with Dylan Minnette who performed the boyfriend of the actress in the movie Goosebumps. Though, this fact wasn’t confirmed. The actress herself assures that now she is entirely concentrated on her career, and she doesn’t have enough time for personal relations.

There were malicious tongues that Odeya Rush was Mila Kunis’s relative that’s why the young actress’s career was taking off so promptly. Though, it’s not true. They are not even acquainted with each other. Odeya showed herself to Hollywood as a talented actress, and she was noticed.

At present, the young actress continues to shoot in the movies and develops herself actively in the acting sphere. In 2017 five more movies were released with the participation of the actress. These were the following movies – the sensational thriller The Hunter's Prayer featuring Sam Worthington in the major role, the tragicomedy The Bachelors with J.K. Simmons – the main star of the movie Whiplash, the horror movie When the Devil Comes, the comedies Lady Bird and Dear Dictator.

The release of the picture Spinning Man in which Odeya will appear on the screen together with Pierce Brosnan and Guy Pearce is set for 2018.

In future, Odeya Rush will embody on the screen a number of memorable roles. We can tell for sure, that the actress with such combination of the appearance and stubborn, ambitious character will cope with all of the roles in the best way possible.

Odeya Rush doesn’t hide from her fans and leads her Instagram page, holding her subscribers’ interest with her personal and home photos. 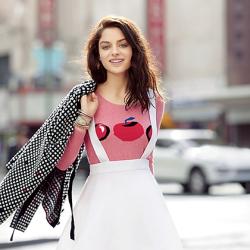