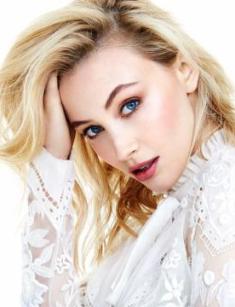 Sarah Gadon is a Canadian actress, the muse of director David Cronenberg, one of the principal originators of the body horror genre. She appeared in his three films: A Dangerous Method, Cosmopolis, Maps to the Stars.

Sarah Gadon was born in April 1987 in Canada. The future star spent her childhood and youth in Toronto. Her parents and relatives were not connected with the world of cinema. Sarah's father is a psychologist, and her mother is a teacher. The parents did not influence the choice of the future profession of their daughter Sarah and the oldest son, James. Nevertheless, young Sarah Gadon was keen on two hobbies, dancing and acting.

The future actress attended the National Ballet School of Canada and then enrolled in the Claude Watson School for the Performing Arts. Sarah loved to dance, but the cinematography attracted the girl too. After all, at the age of 10, Sarah got a role in the film La Femme Nikita, which after the release became cult. Although Gadon got only a bit part, the girl managed to become obsessed with movies.

A year later, Sarah Gadon could continue her acting career. In 2000, the girl appeared in 4 projects. These were also small roles, but directors already knew the young actress and invited her more often.

After graduation from high school, the young woman had to make a choice. Sarah chose acting, although she also loved dancing.

Sarah Gadon gained recognition for her performances in David Cronenberg's films. The director invited her to the projects which had great success. It is no secret that now the actress is called "the talisman of Cronenberg.”

Before she met the famous director, Gadon had managed to play in a dozen films and TV shows, many of them were highly-rated. Sarah became a recognizable actress portraying Monica in the acclaimed thriller Are You Afraid of the Dark? and young Laura in the melodrama Twice in a Lifetime.

In 2000, Gadon was nominated for the prestigious Young Artist Award after the release of the TV series The Other Me. Sarah won the Gemini Award and the Special Jury Award at the WorldFest Houston Festival for her work in the project Ruby Gloom and the short film Burgeon and Fade.

However, Gadon became very famous, playing in Cronenberg's films. The first project of the actress and director was the 2011 movie A Dangerous Method. Although in this film, Sarah Gadon got a minor role, her character was bright and memorable. The actress played Emma, the wife of Carl Jung, the founder of analytical psychology.

The actress later said that the role was not difficult because Sarah’s father was a psychologist and she liked reading Jung and Freud’s books in her youth. The only thing that sent shivers down the spine was a collaboration with real Hollywood stars: Keira Knightley, Viggo Mortensen, and Michael Fassbender. But later, Gadon realized that the stars did not look down their nose at her, the actors just focused on their roles. The experience was invaluable.

At the same time, the actress was busy filming in the thriller Dream House about Will (Daniel Craig), whose mind intertwined fantasy with reality. In the film, Sarah portrayed a supporting character, Cindi.

Soon Cronenberg invited Sarah to new projects. The film Cosmopolis told about the everyday life of a stockbroker, and the black comedy Maps to the Stars focused on the life of the psychotherapist Weiss. In both films, the actress portrayed minor, but bright characters. The movies were highly appreciated by critics and warmly welcomed by viewers. For the last project, Gadon won an award at the Cannes Film Festival.

Then the actress was invited to play in the 2012 historical TV series World Without End, showing the events in England before the Hundred Years' War. Sarah performed the bit part of Philippa.

In 2012, Cronenberg’s son, aspiring director Brandon Cronenberg, invited the father's favorite actress to his debut film. The fantasy film Antiviral increased Gadon's popularity. The story showed the near future when the wave of fascination with pop idols covered the world. Fans, who wanted to get closer to the stars, were able to buy their idols’ viruses and become infected with them.

One of the recent films with Sarah Gadon is Dracula Untold, which has won the viewers’ hearts. The actress played together with Luke Evans.

After this significant project, the actress’s filmography included the light comedy A Royal Night Out about the adventures of the members of the royal family, princesses Margaret and Elizabeth. Sarah Gadon brilliantly portrayed Princess Elizabeth, and Bel Powley showed perfect acting too. To prepare for the role, Sarah changed her hair color and dyed her hair brown.

Sarah Gadon continued to play in successful projects, including the biographical drama The Girl King about the life of Christina, Queen of Sweden (Malin Buska) and the TV series Man Seeking Woman, which aired on American television for three seasons.

Sarah Gadon is also a famous model. In 2015, the woman became the face of Giorgio Armani new makeup collection.

Rumors appeared after the release of the vampire story Dracula Untold that Sarah Gadon and Luke Evans had a love affair. The actors showed passion and love on the screen too convincingly. The tabloids began to publish their photos. Although in 2002 Evans admitted his non-traditional orientation, rumors about their relationship continued to spread.

The actress dodged the question about her attitude towards Evans in every way. Sarah only admired the talent of her partner and said that she was incredibly lucky to play with such a professional actor.

It soon became clear that the personal life of Sarah Gadon was not connected with Luke Evans. After Dracula Untold was released and the dust settled, the actors were no longer seen together. According to official data, now the woman has no husband, as confirmed by the pictures posted by the actress on her Instagram page.

Sarah Gadon is considered to be the rising film star. In 2016, after playing roles in the acclaimed mini-series 11.22.63 and the drama Indignation, Elle magazine ranked Sarah Gadon No. 3 in the top 10 rising film stars. The same year, the actress’s filmography also included the role of the mother of a troubled child, who fell into a coma, in the thriller The 9th Life of Louis Drax.

In 2017, Sarah Gadon was included on the list of the top 100 World's Most Beautiful Women. Moreover, the actress made the top 10 beauties, being behind singer Liza Soberano, model and actress Thylane Blondeau, singer and dancer Chou Tzu-yu.

Having played a supporting role in the project The Death and Life of John F. Donovan, which was released in 2018, the actress had the opportunity to portray a title character in the Canadian TV series Alias Grace. The project tells about the fate of the emigrant, who had to work as a housemaid. The woman could not stand the sexual harassment of her employer Thomas Kinnear (Paul Gross) and eventually killed him. Then she appeared before a tribunal.

Sarah Gadon has a net worth of $1 million.