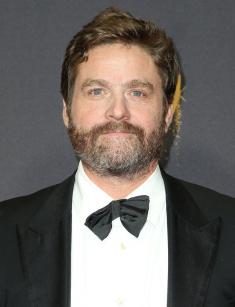 Zach Galifianakis is an American actor, producer and screenwriter, who is known for his roles in comedy films. He gained world popularity after appearing in the comedy The Hangover.

Zach was born in October 1969 in a highly educated family. His father Harry Galifianakis is of Greek origin and his mother Mary Frances (née Cashion) has Scottish Irish roots. Zach has an older brother, Greg and a younger sister, Merritt.

Relatives and parents prophesied to the boy the future of the civil servant: Zach is the nephew of the former Congressman Nick Galifianakis, who represented interests of the state of North Carolina in 1967-1973. Such a prospect did not attract the young boy. Since childhood, Zach amused friends and family, loved fun. The preferences of the young man determined his future.

Galifianakis studied at North Carolina State University, where he was a communication major. He moved to New York after failing his final exams. Zach decided to try himself as an actor. It was no accident; the boy's mother was in charge of the center of acting. But the young man did not manage to get a complete professional education.

Zach began his career as a comedian, who gave humorous performances in Times Square. The improvised performances, which Zach's parents considered a plebeian, gave the young artist the first attention of the public and the opportunity to earn a living. Later, the skill of improvisation was useful to Zach in writing scripts and developing comedy images.

Soon the artist signed a contract with the TV channel, where he began to conduct a talk show. Galifianakis presented to the audience the stars of the underground, in an environment which launched the career of the actor. Zach began the release of his sketch show "Between Two Ferns with Zach Galifianakis," where he held conversations with prominent personalities of that time when he was famous and recognizable. Among Zach's guests were Barack Obama, Natalie Portman, Charlize Theron, Ben Stiller, Sean Penn, Bruce Willis.

The beginning of the film career of Zach Galifianakis was at the end of 90-is. The artist took on any job. Zach was invited to comedy for a cameo role. The repertoire of the actor included work in the Comedy Heartbreakers, Bubble Boy, Out Cold in the early 2000s.

2002 brought the actor the participation in a supporting role of the thriller Below, which was directed by David Twohy. The film told about the incident with the submarine of the Allies during the Second World war. Zach appeared in the role of the radio operator Weird Wally. All the performers of the main roles, including Olivia Williams, Matthew Davis, took courses to familiarize themselves with the rules of behavior on the submarine before the shooting.

A year later, the artist had the main role in the two-season sci-fi series Tru Calling in his filmography. It is a movie about a student of the medical Institute Tru (Eliza Dushku), who begins to hear the requests of dead people during part-time work in the morgue. Zach played the role of Tru's mentor and friend.

In the mid-2000s, Zach plunged into work on television for several years. Among the projects of this time were the series Tom Goes to the Mayor, Wonder Showzen, Tim and Eric Awesome Show, Great Job!. In the late 2000s, the artist lit up in the biographical drama Into the Wild of Sean Penn and the comedy What Happens in Vegas, where Cameron Diaz and Ashton Kutcher played the couple.

Todd Phillips noticed the actor in one of the performances in the genre of improvisation, who invited Zach to star in the film The Hangover, where Bradley Cooper played the main roles, Justin Bartha, Ed Helms. The role of Alan Garner brought to the actor fame and he earned the MTV Movie Award, which improved the position of Galifianakis in the world of cinema.

The comedy sitcom Bored to Death started on the channel HBO the same year, where Zach appeared in the image of a comic book artist, experiencing problems in his personal life. The artist receives a key image in the film Due Date after a series of episodic roles in comedies Up in the Air, Frenemies, Youth in Revolt. Zach's partner on the site is Robert John Downey Jr.

The actor continues to appear in films and give humorous performances. Zach said in one interview that he would be happy to play a sane man instead of an eccentric but it will never happen. The actor performs the roles of cranks with pleasure because they are extraordinary and it might not be so exciting to play reasonable ones.

Zach Galifianakis did not choose his life partner among the stars of show business. The wife of the artist is Quinn Lundberg, who is a co-founder of the Growing Voices charity. The actor helps the girl in this case. Quinn is 12 years younger than Zach: the age difference did not prevent to start a family and be happy.

The lovers married in August 2012 at the UBC Farm in Vancouver. The wedding ceremony was held behind closed doors and lasted only 30 minutes. In September 2013, Quinn gave her husband a son. The couple did not intend to stop at one child, so the second baby appeared in the family, Rufus Emmanuel Lundberg three years later.

The photos of the actor, walking on the streets with a baby in a wheelchair, appeared on the Network. The artist is not a fan of communication on social networks, including "Instagram." But there's Zach's official Twitter account.

Galifianakis has a house in North Carolina, where the actor comes in his spare time. Zach wants to retire and write books after completing his acting career there.

Zach Galifianakis continues to amaze his fans with eccentric images. In 2016, the actor appeared in the comedy thriller Masterminds in the main role of the robber, who is calculated by the police and bandits. Kristen Wiig, Owen Wilson played in this film too. Comedy projects Keeping Up with the Joneses and the series Baskets about the fate of a senior man, who dreams of becoming a professional clown were released with the participation of Zach the same year. Galifianakis himself wrote the script for the last film. Zach Galifianakis has a net worth of $20 million.

An exciting experience for the actor was the role of Gerrit in the costume drama Tulip Fever, where rising stars Alicia Vikander, Dane DeHaan appeared too. The film was released in 2017 but received negative reviews from critics.

The fantasy film A Wrinkle in Time completes the shooting, in which Zach plays with Reese Witherspoon, Oprah Winfrey. The film is based on the American cult novel of the same name of the 60s. The book is still considered intractable adaptation. The plot of the movie is devoted to the search for his father's daughter, who goes to the secret breaks of time, where she hopes to meet a parent.

Galifianakis got the image of a character named The Happy Medium in an unusual distribution. At the beginning of 2018, the film started from the third position of the national rating but the creators still expect an increase in audience interest.