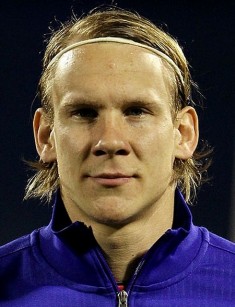 The soccer player Domagoj Vida is the member of the Croatia national team whose FIFA World Cup-2018 performance was triumphal. For the first time in the history, the team reached the final.

Vida began his career at 17. He used to play as a defender for Croatian clubs, Bayer 04, and Dinamo Kiev. In 2017, he signed the contract with the Turkish club Beşiktaş.

At the championship, the sportsman became famous not only for his field performance but also the political scandal. The unofficial video where the player said: “Glory to Ukraine!” became the center of public attention. This caused a stir among nationalists in Ukraine and Russia. To avoid disqualification from FIFA, the Croatian sportsman had to explain everything.

Domagoj was born on April 29, 1989, into the family of the Yugoslavian and later Croatian soccer player Rudika Vida. The season 1993/1994 was successful for the father: he scored 26 goals for Belišće; he also was the forward of his native town club Osijek. In Osijek, Domagoj started his career as well.

Domagoj and his brother Hrvoje took an interest in soccer since the early childhood. From 7 to 14, the boy practiced in the “Unity” youth team in Donji Miholjac. In 2003, the sportsman joined the Osijek youth team. At that time, the legendary goal scorer Davor Šuker announced he finished his soccer career; by the way, he also started playing for Osijek. However, Vida did not want to follow his example and preferred to become a defender rather than a forward.

At 17, Vida joined the main team of Osijek. Throughout four seasons, he played 90 matches and scored six goals. That period was quite successful for the club in its newest history: in 2008, Osijek placed the third in the Croatian First Soccer League and the fifth in 2010. However, it never won the championship.

At this time, Croatia youth national teams invited the sportsman. Besides, European scouts got interested in Vida. In 2010, Domagoj transferred to Bayer 04 whose players were quite strong: at the end of the season, it won the silver medal in Bundesliga and lost to Borussia only. Thus, the new player just hoped to participate in the European League matches.

The Croatian sportsman played in eight games of the championship; in March 2011, he debuted in Bundesliga as he stepped in for injured Manuel Friedrich during the match against Wolfsburg.

It was the only game in the German championship for the player. While Bayer could participate in the Champions League again, it made no difference to the reserve sportsman. In a year, Vida decided to come back home. Dinamo Zagreb signed the contract with Domagoj Vida. Together with its new defender, Dinamo won the national championship-2012 for the seventh time in a row; it also gained the Croatian Soccer Cup for the 19th time.

In 2013, Vida joined Dinamo Kiev. The Ukrainian club had to pay €6 million for the 23-year-old player’s transfer. Oleh Blokhin was the head coach at that time; that period brought the worst luck to the club. It was particularly painful to lose to Bordeaux in the first play-off game of the European League. In that very match, Vida debuted as the Dinamo defender.

Vida conquered fans’ hearts in a month. In March 2013, when the team faced Vorskla Poltava, he scored a goal at the fourth minute. It was the only goal of the match; Dinamo’s fans celebrated the long-awaited victory.

However, the further performance left much to be desired; in spring 2014, Blokhin was fired, and Serhiy Rebrov took his position. He could not improve the team’s results in the national championship much, but he led Dinamo to the triumph in the Ukrainian Cup (2:1); it was Vida who scored the victorious goal.

In five years in Kiev, the Croatian player scored nine goals the majority of which were performed by the sportsman’s head. Ironically, Vida used his foot when he scored his best goal. It happened at the Ukrainian Premier League final game against Dnipro. Once again, the defender was the only player who scored in that match. Together with Serhiy Rebrov, Vida turned into the symbol of the team’s rebirth.

In Dinamo, Vida had his worst injury: he collided with a Young Boys player during the European Championship game and traumatized his head. Doctors tried to stitch the open wound right on the field but decided to take him to a hospital.

Domagoj Vida is married. The sportsman met his future wife in 2013 in a Zagreb night club. Later, the young woman became famous as the Miss Universe Croatia-2014 winner.

In fall 2015, the couple’s son David was born. The father was present at the childbirth.

In 2016, Ivana and Domagoj married officially. In a year, the lush church wedding ceremony took place. The player’s friend Ognjen Vukojević was one of the guests.

Both the sportsman and his wife have their Instagram accounts. The player posts photos from practice and matches; Ivana posts selfies most often.

In February 2018, the defender debuted in Beşiktaş. The four-and-a-half-year contract had been signed a month before that.

At the FIFA World Cup-2018, the defender was the Croatia national team first eleven member and played all matches.

His contribution was particularly valuable during the game against Argentina. Besides, in the quarterfinal game, Domagoj scored one of the two goals that led to the draw with the Russian team. Vida also scored in the penalty series. In the semi-final match, he effectively managed the English team’s attacks organized by Harry Kane.

In terms of being involved in scandals, the Croatian defender broke records of the present-day generation of the country. In 2011, he was arrested for fighting; the scandal related to the painful defeat from Lion in the Champions League match followed.

Croatia lost with the score 7:1. Due to this tremendous victory, the French overpassed Ajax and got to the play-off. During the game translation, it was recorded that Vida winked at a Lion player after a goal. Thus, the rumors about Dinamo’s predetermined failure spread. UEFA did not start any investigation.

In 2012, Dinamo fined the player for opening a can of beer in the club’s vehicle. Four years later, the sportsman lost his driving license for a year: the Kiev police caught him driving drunk.

After the game with Russia in 2018, Vida sent his friends a video message; the addressees posted it on the Internet. The video provoked an outcry. Because the sportsman said “Glory to Ukraine!”, the discussion escalated, and Vida was accused of making connections between politics and sports. He could be disqualified. In his interview, he explained there was no political meaning behind that phrase and apologized to Russia. FIFA only issued a caution to Vida.

Later, another video went viral on the Internet; Ivica Olić, the former CSKA player and the Croatia national team coaching staff member, also appeared on that video. Domagoj said the phrase which was translated as “Belgrad, burn!”

In fact, it was clear from the context that the sportsman did not mean the capital of Serbia: it was the restaurant in Kiev popular among soccer fans. Besides, the correct translation would be “Belgrad, bring it on!” Thus, the incident was over.

Russian fans complained Vida received two yellow cards at the quarterfinal game: normally, such players are sent off the field. Later, the Russia national team representatives explained that Vida had only one yellow card, and the second one was for Josip Pivarić. However, this action was broadcast belatedly which caused the misunderstanding.