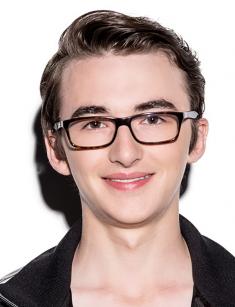 Young British actor Isaac Hempstead Wright became famous worldwide thank to the role of Brandon (Bran) Stark in a multi-episode fantasy epic series Game of Thrones based on the cycle of George R. R. Martin's books A Song of Ice and Fire. Filmography of the actor includes two more films and three works in the voice acting of animated films, but viewers mainly know him as thoughtful and brave Bran.

Isaac William Hempstead was born on April 9, 1999, in London. Later, the family moved to the town of Faversham, Kent, in South-East England, where Isaac graduated from the state high school of coeducation. Simultaneously with his studies at the gymnasium, he studied acting at the Kent Youth Theatre in Canterbury and worked on the set in Belfast.

The boy did not dream of a career as an actor and preferred to play football. But in the winter, when it became cold to play sports in the open air, nine-year-old Isaac came to the drama club. Now the young actor jokes that the decision was wrong because on the set of Game of Thrones he had to freeze as never happened to freeze on the football field.

Viewers first time saw Isaac on the screen in mystical Thriller The Awakening by Nick Murphy. Hempstead Wright played the role of the quiet Tom Hill, a boy who was not noticed by his parents and surrounding. And the audience saw a sad child and also remembered the talented play of a young actor who had shown his acting skill at the level of famous adult artists and who was not shaded by Dominic West and Rebecca Hall.

But the real recognition came to Isaac after the premiere of the first season of Game of Thrones, in which he portrayed Bran Stark. In George Martin's book, Bran was only eight years at the time of the beginning of events. But in the film adaptation, it was decided to make the characters-children older, and eleven-year-old actor perfectly matched the role of a medieval child.

Already from the first episode with Bran's participation, the execution of a fugitive sentinel, it was impossible to look away from the serious face of the boy, which reflected the thoughts and experiences of the character. For the first episode viewers had time to get attached to the restless boy, deftly climbing the walls of the family castle. But the situation when Bran fell from the tower's window clearly divided the characters into positive and negative.

After the injury, the boy discovers supernatural abilities that he can foresee the future and influence the past. The little boy never wanted to be a magician, but mysterious Three-Eyed Raven leads Bran towards his destiny.

After the fall, Bran cannot walk himself, and he is accompanied by a strongman Hodor, carrying a boy on his back, a warrior of The Free Folk, the younger brother of Bran, Rickon, Starks' direwolves and other complicated personalities.

In addition to the medieval fantasy, the audience can see Isaac Hempstead Wright playing in the thriller about the fight against crime Closed Circuit, in which the actor again worked on the set with Rebecca Hall, his colleague from The Awakening.

Besides, the young man voiced Aidan in the animated series Family Guy, a troll named Eggs in the cartoon The Boxtrolls and Jack in Revolting Rhymes Part Two. For his work in The Boxtrolls, he received Behind the Voice Actors Awards in 2015.

However, the work in Game of Thrones has so far brought only four nominations for prestigious film awards. In 2013, Hempstead Wright was nominated once for the American Young Artist Awards and three times for Screen Actors Guild Awards, in 2011, 2014 and 2018. However, the acting cast in the TV series is so bright that the young man can not outshine the colleagues yet.

The actor has a net worth of $4 million. In real life, the young man wears glasses, slightly changing the appearance, but the girls still recognize the actor on the streets and in the cafe and asked to take a photo to remember the moment. However, young men also do not refuse to take a picture with a celebrity. In Isaac's account on Instagram you can find a lot of images of him and friends, colleagues and mysterious strangers together. In the pictures, Isaac smiles and fooling around, unlike his character.

A friendly relationship that ensued while working on the series, tie Isaac with Dean-Charles Chapman and Nell Tiger Free who played in the series the roles of Tommen and Myrcella, respectively. Young people often hang together in London's clubs. Journalists who asked questions about Isaac's personal life managed to find out that the actor loves chocolate and adventure movies. He is tied to close people and his two dogs, plays the piano, guitar, and drums.

Kristian Nairn – the actor, played the giant Hodor, who wore Bran on his back, told reporters that Isaac loved cartoon about SpongeBob and was continually humming in Kristian's ear songs from the animated series. In other things, the senior actor finds a young colleague a wonderful and intelligent boy and a good actor, who, however, does not want to continue his acting career and plans to be an astrophysicist.

The young man still does not know what he will do after the shooting in the grand epic that has become a significant part of his life. For eight years of filming Isaac Hempstead Wright had finished school. In an interview, Isaac said that he was saving up acting fees to pay for the university, and in another one, he admitted that he dreamed of a trip around the world.

In any case, the work in Game of Thrones is inscribed in the biography of Hempstead Wright as a whole chapter. During the filming, the boy turned into a young man. He grew by almost 12 inches (30 cm), and now his height is 5'11'' (180 cm), got stronger (Kristian Nairn especially noticed this) and got an unforgettable experience.

In October 2017, the film crew of HBO began shooting the eighth, final, season of the saga Game of Thrones. As Bran Stark survived over the previous seven seasons (or more precisely, six in the fifth season Bran does not appear), Hempstead Wright has enough work. Moreover, the storyline connected with supernatural powers of his character became more and more important to the plot of the series.

Most of the filming took place on the already habitable site in Belfast, where Isaac and his friends had a van for rest. On February 8, journalists photographed Kit Harington in Dubrovnik, Croatia, near the picturesque ruins of the castle, where they used to shoot scenes of the Royal Harbor.

Filming of the last season ended in 2018. The plans were adjusted several times to increase the shooting time. Even though in the eighth season there are only six episodes, the duration of combat scenes and episodes using three-dimensional computer graphics is the biggest in all seasons. The long-awaited premiere of the final of the cult series took place in April 2019.

At present, Isaac has a net worth of $4 million.