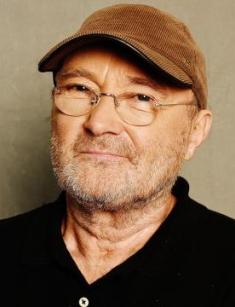 Phil Collins is called an intellectual rocker and master of drums. Rock music brought him a fortune, royal recognition, and unquestionable respect. The musician is one of the three artists who succeeded in group and solo careers and more than 100 million copies of their albums were sold. Apart from Collins, only Michael Jackson and Paul McCartney achieved that.

The future rock legend was born on January 30, 1951, in London. The father continued the family dynasty of insurance agents; the mother was a children’s theatrical agent. Naturally, the parents encouraged Philip David Charles Collins and his siblings to develop their artistic abilities.

Little Phil received drums as a present; the house inhabitants forgot what silence was like. Soon, the father gave a garage to his son for his music practice.

As a teenager, Collins worked on movies and even entered the Barbara Speake Stage School. The young man and his friends were extras in the movie A Hard Day’s Night where The Beatles members played the main characters. When Phil saw the legends with his own eyes, he made a final choice and decided to devote his life to music.

Collins left the theater school right before the exams. He tried many groups to develop his talent: Real Things, The Charge, Zox, The Freehold, The Radar Boys; he recorded the only album with Flaming Youth and had a kind of tour; however, the band split up soon.

In 1970, Phil was looking through Melody Maker magazine and found an ad: the young group Genesis wanted a skilled drummer. Collins was familiar with the band that played the mixture of rock, jazz, classical, and folk music and used theater elements in their shows.

The musician was accepted; however, he had to learn a lot: the group was famous for their detailed arrangement and virtuoso instrument playing. The drummer had to be equal to other artists. Collins remembered how Peter Gabriel taught him to keep the right face and play as if he were relaxing.

Phil not only played the drums but also worked as a backup vocalist in Genesis for five years. He had a solo song, though: it was “For Absent Friends” from Nursery Cryme.

In summer 1075, the group leader Peter Gabriel left: as the vocalist explained to his fans, he did not see perspectives for further development. His colleagues saw that as a betrayal and even had a fight.

Some 50 candidates were auditioning for Genesis every day. Finally, Phil’s wife, Andrea, told her husband he was pretty good when he sang at school performances. The backup vocalist career changed dramatically: the audience loved the new band leader. The next 12 years became the brightest epoch for Genesis and made a significant contribution to the British and international rock music.

The sales of the first album in the “renewed” band, A Trick of the Tail, surpassed all the previous albums altogether. The double album Seconds Out spent 17 weeks in the British music chart. The 1980 album Duke came out in spring and topped the chart in Britain for a week; it reached number eleven in the USA. More than 100 thousand tickets were sold to the group’s shows within several hours. The music video “Land of Confusion” was awarded Grammy.

Collins was the first artist to use a drum machine, the Vari-Lite technology, and Prism sound system.

In the mid-1980s, the band members began to work on their solo projects; Collins was not an exception. It was a significant risk for the musician: few artists managed to be as successful as their groups, and even fewer surpassed it. More than that, the man divorced his wife and was going on wild rides with Eric Clapton; sleepless nights in a studio did not give any hope for success. Phil did it: the sales of Face Value were bigger than all albums of Genesis; the hit “In the Air Tonight” became the singer’s trademark song.

Collins did not leave the group, though. In 1986, the group presented the album Invisible Touch, the bestselling work with the largest number of hits. The lead single was the only song of Genesis that topped American charts.

Throughout his solo career, Phil conquered the US charts seven times. The songs “Against All Odds”, “Тwo Hearts”, “Separate Lives”, “Аnother Day in Paradise”, and “A Groovy Kind of Love” brought him international recognition.

The musician said the final good-bye to Genesis in 1996, after many scandals, disagreement, and mutual shams. Overall, Phil and the band presented twelve albums; We Can’t Dance was the last one. Collins himself released solo seven albums.

In a while, the passion for cinematography manifested itself. Collins had cameo roles in the 1970s; the comedy drama Buster was the most notable project; it told the story about a mail train robbery that never happened. Besides, the singer appeared in The Return of Bruno, Room 101, Hook, Frauds, etc. Phil’s soundtrack to the animated movie Tarzan (1999) brought the musician the Academy Award.

In 2006, Collins came back to Genesis; the reunited group existed for five years, performed at several events, and presented a concert video. In spring 2011 Phil announced he left the stage but returned five years later.

Phil Collins has been married three times. His colleagues were joking that women should disappear so that the musician would become who he must be.

Andrea Bertorelli, Phil’s theater school mate, became his first spouse. They met in Vancouver where Genesis was giving a concert. The group did not like the news about the drummer’s wedding: they agreed to have no connections to women. Still, the man was persistent. The son Simon was born in this family; he followed in his father’s footsteps. The couple also adopted the girl Joely.

Collins was not a loyal partner. Soon, Andrea broke up with him and began to date the designer who was working on the musician’s house.

In 1983, Jill Tavelman became the wife of the rock musician. The daughter Lily was born in this union; she is a Hollywood star today. Phil has a splendid relationship with his daughter.

In a while, the couple split up. Some bits of information appeared in the media: the woman choked Collins with order and coziness, scared away his friends, and could not tolerate strong language.

The third attempt to build a happy family was not lucky, too. The man married a model and translator Orianne Cevey who was 20 years younger than he. Cevey came from a prosperous Swiss family; they met when Collins was still married. Phil informed Tavelman about the divorce via fax and paid £17 million.

The artist bought a luxurious mansion near Lake Geneva for his third partner. Two sons were born in this family.

In 2006, the woman filed for divorce. Phil had hearing problems, and there was something wrong with his left arm. The husband did not accompany Cevey at social events and hated noisy parties; it was not the vibrant Collins she married. The divorce cost Collins $46 million. However, in 2016, the media reported the singer renewed the relationship with Orianne; they live in Miami now.

The Not Dead Yet Live tour was scheduled for 2017; it had to be postponed till fall because of Phil’s trauma.

In 2018, the artist continued to give concerts; the son Nicholas accompanied him and played the drums.