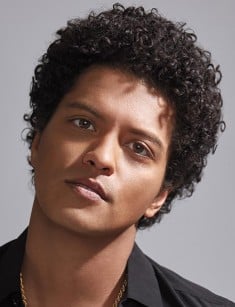 Bruno Mars is an American singer, songwriter, and music producer. Moreover, he is an owner of Grammy award, and he has become famous after participation in the recording of the tracks of rappers B.o.B (the song ''Nothin' on You'') and Travis McCoy (the composition ''Billionaire'').

Peter Gene Hernandez (the real name of the singer) was born on the 8th of October, 1985, in Honolulu - the capital of Hawaii which is situated on the island of Oʻahu. It is known that the vocalist also has sisters Jamie, Tiara, Tahiti and even a stepbrother Eric.

It is known that Bruno’s father Peter was engaged in the education and upbringing of his son and since young years attended all performances of the vocalist. During one of the concerts, Mars performed on one stage with the head of his family. After they had sung a composition in a duet, the singer asked public which was present at the show to applaud Peter who had taught him everything that he knew.

What about Bruno’s mother, it’s only known that she was called Bernadette and she also had received music education. Even though the singer’s parents divorced when he was very small, they managed to stay friends.

Mars grew a very vivid and active child. At the age of two, the singer got a nickname of Bruno (in honor of the wrestler Bruno Sammartino who was famous at that time and had a round face). It is known that in his youth Mars was fond of the creative work of Michael Jackson, Elvis Presley, The Isley Brothers and The Temptations.

Bruno often attends events wearing hats similar to those of Frank Sinatra. By the words of the singer, it is connected with the fact that in his childhood he had curly hair and when he had his hair cut he felt uncomfortable. The hats saved him from this feeling.

In 2003 Mars moved to Los Angeles to start his music studies. The same year he came up with his pseudonym. In 2006 Bruno concluded the contract Atlantic Records label. In the beginning, the musician was engaged in the composing of the songs for other performers and in producing.

In September 2010 the well-known singer was arrested in Las Vegas for cocaine possession. In the conversation with the police, he claimed that he didn’t own the forbidden substances and he had never used drugs before. The court hearing took place in February 2011. At that time Mars could get a sentence in four years and a fine of $50 thousand for possession of two and a half grams of cocaine

As a result, Bruno got the sentence of 200 o'clock public works and payment of the penalty of $2 thousand. Also, the court ordered the star to attend the classes devoted to the harms of drugs during a couple of months

Before the solo singer achieved success, Bruno had become the author of the songs of Alexandra Burke, Travie McCoy, Adam Levine, Sean Kingston, Flo Rida and the Sugababes band.

For the first time, he appeared as the performer when he took part in the recording of the album of the Animal band under the title - ''Far East Movement''. Bruno has gained popularity after the songs B.o.B ''Nothin' on You'' and Travis McCoy’s – ''Billionaire''. In these compositions, he was a performer and a co-author as well.

On the 11th of May, 2010 the actor released EP ''It's Better If You Don't Understand'' which occupied 99th position in Billboard 200 chart. In August 2010 he became the co-author of the single under the title ''To Fuck You!'' of Cee Lo Green band. Besides, on the 12th of September Bruno appeared on the same stage with B.o.B. and Hailey Williams at MTV Video Music Awards 2010 ceremony.

The debut album of the musician under the title ''Doo-Wops & Hooligans'' came out in October 2010. The song ''Just the Way You Are'' which was released on the 19th of July, 2010 and headed Billboard Hot 100 chart for a few weeks became his first single. ''Liquor Store Blues'' and ''Grenade'' became two next Bruno’s singles. Since October of the same year the singer performed at the opening act of the tour concerts of Maroon 5 in support of their album ''Hands All Over''.

In November 2014 the singer released his single ''Uptown funk'' performed in a duet with Mark Ronson. Moreover, Bruno has shot the video on this song, and after the termination of the Moonshine Jungle Tour, he announced that he had begun to work on his third album.

As a result, the disc ''24K of Magic'' was released in November 2016 and received positive feedback from the listeners and online editions Irish Times, AllMusic, Slant Magazine, Entertainment Weekly, Cleveland.com and USA Today.

While listening to the whole album, it's possible to feel the influence of the heroes of Mars's childhood: New Edition, Boyz II Men and some other legendary performers of the golden era of R&B who inspired the singer during the recording of his album.

In 24K of Magic Bruno has firmly defended his point of view and insisted on the need to remember old school. Instead of filling the disc with collaborations with significant singers of the modern times the performer convinced the children of eighties to remain forever young. According to the music critics, ''24K Magic'' has brought new life to the vintage R&B which started to sound different in 2016.

Bruno never talked too much or shared information about his relations with women. Despite the efforts of the singer to keep his private life in secret, cunning journalists always succeeded in learning the juiciest and most scandalous details about the relations of the singer with women outside the scene.

So, in 2006 paparazzi captured the musician together with the professional dancer and actress Chanel Malvar. However, these relations which have lasted for four years haven't resulted in a marriage. The mass media members haven't succeeded in finding out the reason for the couple's break-up.

In 2009 Mars was noticed by the vacationer on the yacht in a company of the Russian model Yulia Lukashkina. Later the actor announced that he had strictly friendly relations with the model.

In 2011 the performer of the song Grenada again fell in love, and that time Rita Ora became his affection. By the opinion of Bruno’s fans, this singer could become vocalist’s wife. Despite the predictions of long family life, the couple separated. It happened because of the lovers’ hard working schedules and the fact that they were not going to refuse it.

At the end of the same year, the press managed to take a photo of Bruno with the actress and model Jessica Caban. Now the lovers don't conceal their relationship anymore. So, Caban often posts their joint pictures with Bruno on her Instagram page.

In March 2017 there was premiered the video on the single ''That's What I Like'', and in August there was released the video on the song ''Versace On The Floor''. Now the singer who is 165 cm tall travels around the towns with his concert program in support of the album 24K Magic which came on the market in 2016. There is information that in October the well-known singer will visit Orlando, Philadelphia, Raleigh, Miami, and Tampa.

Even though Bruno has a busy working schedule, the performer of the song ''Just the Way You Are'' doesn't forget about his subscribers. Bruno regularly publishes photos from his performances and vacations on his Instagram. Moreover, on the singer’s official website anyone can order production with the print of the ''24K Magic'' tour and also learn the schedule of the forthcoming concerts.

It’s worth noting that social networks are not the only source which informs Mars’s fans about the latest news from his life. The materials referring to the creative career of the Hollywood star are also published on different internet portals and in printing editions. 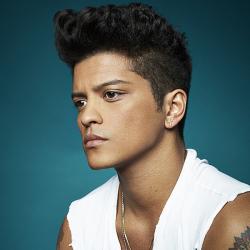