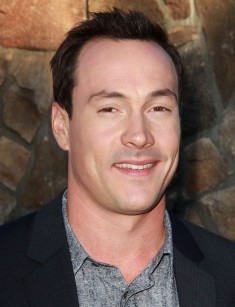 The youth picture American Pie has opened some many young talents, including Chris Klein who has performed the role of Chris 'Oz' Ostreicher. The actor hasn't become very popular beyond the territory of his native United States, though he has appeared to be very demanded in his country. The Hollywood agents with pleasure invited him to play the secondary roles and called him "young Keanu Reeves" because of his similar appearance with the star of Matrix.

Frederick Christopher "Chris" Klein was born on the 14th of March, 1979 in Hinsdale, in the State of Illinois, in the family of Terese Bergen and Fred Klein. His father was an engineer by his profession, and his mother worked as a tutor in the kinder garden. Though, she had enough "pupils" in her house: Frederick has an elder sister Debbie (1978) and a younger brother Timothy (1982). Christopher is American, but he also has the German, Irish and English background.

Chris, as well as many other boys at the school age, preferred sport and played for the soccer team in the position of the defender and the midfielder and also practiced swimming. However, the future actor also had creative skills. At the age of ten, he had his debut on the stage in Chicago and sang the gospel of This Little Light of Mine.

When the boy turned thirteen, the Klein family relocated to Omaha, the State of Nebraska. Chris was admitted to Millard West High School and later appeared on the stage, that time as the soloist of West Side Story. Being a student of the graduation class, the young talent was noticed by the director Alexander Payne. He was going to hold the shootings of the movie Election in Omaha, and he found the actor for one of the significant roles. In such a way Chris Klein began his career.

The movie Election with Matthew Broderick and Reese Witherspoon in the leading roles was released in 1999. The self-confident schoolgirl Tracy is in the center of the narration. She wants to become the president of the school council. Jim McAllister — the young and charismatic History and Social Sciences teacher throws up obstacles to her. He thinks that such upstart and shallow girl as Tracy, doesn't deserve the position on the school trophy wall.

In this completion for the presidency there enters Paul Metzler – the character performed by Chris Klein. His character is the star of the soccer team. Though, he is not arrogant and silly as ordinary characteristic sportsmen in the modern youth comedies, but kind and polite.

Because of the leg trauma Paul who studies at the graduation class doesn't appear on the field, and Tracy motivates him to become the school's president. Although the girl realizes some good actions, she does it of arrogance only as she wants to win the most popular and handsome schoolboy.

The movie was positively met by the film critics even though it earned $14,9 million in the hire (having the budget of $25 million). Basing on 107 critic reviews the Rotten Tomatoes platform has given to the picture the rate of 93% and the following comment:

"Election" — is a successful combination of black humor and "smart" script, it’s a witty and very pleasant movie."

Besides, Election has taken the 61st position in the rate of 100 Most Funny Comedies of Bravo rate, the 9th line of Entertainment Weekly 50 Best Movies about High School list and the 45th position among 100 Best movies of all times according to Premiere. Alexander Payne said that it was one of the favorite movies Barack Obama.

Certainly, the actors' participation in such sensational project has brought Chris Klein the ticket to the bright future of the successful actor. In the same year 1999, the actor enriched his filmography with one more movie which is considered the cult in the teenagers’ world. It is the movie under the title American Pie.

The plot of the movie is focused on the story about four graduates — Jim (Jason Biggs), Oz (Chris Klein), Kevin (Thomas Ian Nicholas) and Finch (Eddie Kaye Thomas). During their studies at the high school, they never had a sexual experience with the girls. They have examinations around the corner, and later they have to enter the college. In youth, the opinion of the people who surround you has the defining significance. Not to be among the losers the guys want to lose their virginity before the graduating party by all means.

Everyone has achieved his goal but in different ways. For example, Klein's character Oz has met his real love — the beautiful chorister Heather, and Finch has found consolation in the hugs of the mother of the party-goer Steve Stifler (Seann William Scott).

The movie American Pie and Election have opened the doors to Hollywood for Chris Klein. In 2000 the actor performed the role of the ideal guy in the dramatic comedy Here on Earth. In 2001 there came out the second part of the story about four sex-crazed students and the movie Say It Isn't So. The characters of this movie are the future spouses who find out that they are relatives.

In 2002 in the movie, Rollerball Chris performed together with Jean Reno. He received the role of Jonathan Cross for which the director planned to invite Keanu Reeves. The critics have placed this movie for the 28th position in the list of 100 Worst Movies of 2000-s. It’s possible that this failure became the reason for the fact that in the next project We Were Soldiers the actor got the role of the minor character.

The actor took part in the movies The United States of Leland, The Long Weekend, Just Friends, Hank and Mike, Caught in the Crossfire — since 2003 Chris Klein can regularly be seen on the big screens in the main and in the secondary roles.

In 2012 the actor returned to work on the movie American Pie. This part received the title American Reunion. The grown-up characters of the film meet each other thirteen years later to tell each other what they have achieved. So, Klein's character Oz has become the sportscaster and had relations with the supermodel.

In 2013 the actor together with the star of the series Big Bang Theory Kaley Cuoco performed the role in the movie Authors Anonymous and also appeared in the picture Resident Evil: Retribution.

In January 2000 Chris Klein began to have relations with Katie Holmes. In three years later the lovers announced their engagement, and in 2005 they broke up without getting married. By gossip, Holmes couldn't bear the alcohol addiction of the young man.

In 2011 during his friend's wedding ceremony the actor got acquainted with the tourist guide Laina Rose Thyfault. The couple got engaged in December of 2014, and on the 9th of August, 2015 the young people celebrated their wedding. In their family, they have two children: Frederick Easton (was born on the 23rd of July, 2016) and Isla Rose (was born on the 26th of May, 2018). Chris regularly publishes the photos with his wife and children on the social networks. The actor’s account appeared on Instagram on the 30th of May, 2018.

In 2005 Klein began to have problems with alcohol. In February he was detained for the driving being drunk. On the 16th of June, 2010 he was detained one more time. In five days there appeared the information that the actor started the 30-day treatment program for alcohol addiction.

Klein's representative has told that

"after the recent events Chris had to look soberly at his problem with which he deals during long years. Now he has understood that he won't be able to overcome his disease alone".

The rehab course has given its results. Now the actor practices sports (having the height of 185 cm he weighs 81 kilos), and neither drinks alcohol nor smokes. Also, his happy family personal life motivates him to lead the healthy way of life.

In 2018 the romantic comedy The Competition featuring Chris Klein in the significant role was released. This movie tells about the girl who following her own "theory of the pig," finishes her relationships with the men after half a year to avoid the betrayals. However, the character of Chris, Calvin, wants to deny this theory.

In 2019 there are announced the shootings of the second part of the picture The Benchwarmers (2006). Chris Klein is also included to the cast. 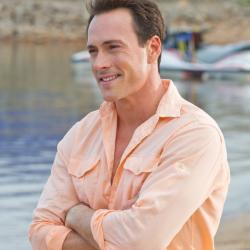