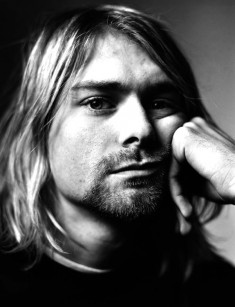 Kurt Cobain was the American singer, songwriter, musician, and artist who became the iconic figure thanks to his membership in the rock group Nirvana.

Kurt Donald Cobain was born in February 1967 in Aberdeen, not far from Seattle. The future star’s father Donald Leland Cobain was an automotive mechanic, and the mother Wendy Elizabeth (née Fradenburg) worked as a teacher and became a waitress in a bar later. Other relatives also took care of the boy. When Kurt was three, his younger sister Kimberly was born.

Kurt showed the interest in music at the age of 2. The boy liked The Beatles and The Monkees and frequented his uncle’s and aunt’s rehearsals in the country ensemble.

When the would-be star turned seven, his aunt Mari Earl gave him the children’s drum set as a birthday present.

In a while, Kurt got found of AC/DC, Led Zeppelin, Queen, Joy Division, Black Sabbath, Aerosmith, and Kiss.

When the boy was eight, he had to suffer from his parents’ divorce; this event had a negative influence on his mind and further behavior. From that time, Kurt became a cynic and aggressive loner. For some period, he lived with his mother but later moved to his father in Montesano. Soon, Cobain’s uncle committed suicide; the boy loved him very much.

After the divorce, the father married Jenny Westby. The teenager could not find the common language with his stepmother and left his house to stay with his relatives.

At 14, Cobain learned how to play the guitar; the member of The Beachcombers Warren Mason became his first teacher.

As the young man finished school, he led a vagabond life for some period and stayed with his friends. Later, he found a job. In 1986, Kurt Cobain was arrested for eight days for trespassing and alcohol drinking.

In 1985, Kurt Cobain founded the group Fecal Matter which had seven songs in its repertory but released no album and broke up. Still, this experience contributed to the musician’s further career.

In the course of time, Kurt’s friend Krist Novoselic offered to create a new rock group. The drummer Chad Channing joined the team soon. The musicians could not find the suitable group name: they used to be Skid Row, Ted Ed Fred, Bliss, and Pen Cap Chew. Eventually, the name Nirvana was chosen.

In 1988, the group’s single “Love Buzz/Big Cheese” was presented, and the debuting album Bleach came out the next year. Kurt Cobain performed songs where punk and pop styles combined.

1991 brought the global fame: the album Nevermind was released, and the hit “Smells Like Teen Spirit” became the hymn of the whole generation. After this song, millions of the album copies were sold out.

There were thousand devoted fans on Nirvana concerts. The musician tried to be identified with independent rock, so he made the next work In Utero (1993) gloomy and dark on purpose. The album did not become popular but took top chart positions. “About a Girl,” “You Know You’re,” “All Apologies,” “Rape Me,” “In Bloom,” “Lithium,” “Heart-Shaped Box,” and “Come As You Are” became the most successful songs; these music videos continue to be popular all over the world.

Fans also appreciated The Beatles cover “And I Love Her.” In his interview, Kurt marked he liked to listen to this group in his childhood.

In late 1980s, the group Nirvana was created. Kurt mentioned he was looking for the name which would be beautiful and pleasant.

In 1991, the single “Smells Like Teen Spirit” came out and conquered the world’s music charts. Nirvana surpassed even the legendary Guns N' Roses.

Cobain felt uncomfortable because of his fame: he was irritated he was the icon of masses. However, the media called Nirvana the “flagship band of Generation X.”

Kurt Cobain met his future wife in 1990 at a concert in Portland club; both musicians were performing with their groups. Courtney mentioned she had noticed Cobain in 1989 when Nirvana was giving a concert; she showed her interest, but the man ignored her.

Later, the musician explained his behavior: he wanted to be a bachelor for a little longer.

Finally, the young people began to see each other. At the beginning of 1992, Courtney learned she was pregnant. In February of that year, Kurt married his girlfriend.

The wedding ceremony took place on the Hawaiian beach Waikiki. While Cortney Love was wearing the dress that Frances Farmer used to wear (the newlyweds adored this actress), Kurt Cobain was too lazy to wear a suit, so he appeared in his pajamas.

On August 18, 1992, the couple’s daughter Frances Bean Cobain was born.

Kurt Cobain had health issues from the very childhood. He had several diagnoses including the manic-depressive psychosis; as a result, he was taking psychostimulants. In addition, young Kurt began to use drugs and got addicted. The fact that there were alcohol abusers and mental patients in Cobain’s family also complicated the situation: two uncles from the fraternal line had committed suicide.

After experiments with many drug substances, Kurt Cobain switched to heroin. In 1993, the star had a massive heroin overdose. A fortnight before the suicide, the musician’s friends convinced him to undergo a rehab course, but Cobain ran away the next day.

The singer’s body was found on April 8, 1994, in his own house. The electrician Gary Smith who was going to install an alarm system saw the musician through a glass door. Initially, he thought the man was sleeping, but he noticed blood and the gun then.

Taking into account the previous overdose incidents, the police prepared the report according to which the musician overdosed on heroin and shot himself with a gun. A suicidal note was found near Cobain’s body. Thus, it was announced suicide caused his death. However, some fans still believe Kurt Cobain was murdered.

The deceased idol’s image still haunts fans. After Cobain’s death, many directors presented movies about his life and art. The audience particularly liked the movie Kurt & Courtney released in 1997. The creators tried to interpret the reasons for the star’s death. Later, the movie The Last 48 Hours of Kurt Cobain came out; in 2015, the documentary Kurt Cobain: Montage of Heck was released. This story turned out to be truthful: the Nirvana members and Kurt’s relatives provided the directors with many unpublished materials.

Thousands of fans wished to attend their icon’s funeral. The public ceremony took place on April 10, 1994. Kurt’s body was cremated, and his ashes were divided into three parts.

In 2013, the media reported the house where Cobain grew up was going to be sold: the legendary musician’s mother announced that decision.

After the musician’s death, his diary became popular; there were letters and notes from 1980 to1994 there.

The American singer’s quotes became as legendary as his songs. 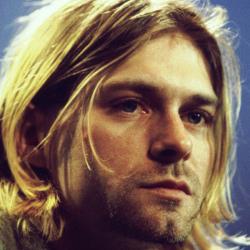