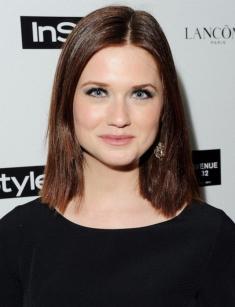 Bonnie Wright is a young actress who got public recognition after the fantasy movie series Harry Potter. Her Ginny Weasley appeared in several episodes in the first part and became the victim of the cursed diary in the second one. This character went through the further movies and became a courageous fighter and the protagonist’s girlfriend.

The actress’s filmography is not limited by Harry Potter: she appeared in a dozen of other projects and tried herself as a director of short movies.

The would-be star was born in winter 1991 in the capital of Great Britain. Her parents, Sheila Teague and Gary Wright, owned a jewelry company Wright & Teague. Bonnie has an elder brother, Lewis.

The girl was artistic: she was good at dancing and painting and played the piano and recorder. Wright went to King Alfred School and continued her education at London College of Communication.

In 2010, Bonnie became the spokesperson for her parents’ jewelry line for Oxfam charitable organization.

Although Bonnie Wright is pretty young, she has appeared in one of the most successful franchise ever. Harry Potter became her “magic wand” that opened the road to the big screen.

Wright participated in the auditions for the part of Ginny because of her brother’s words: Lewis told her she looked like that character. The movie creators had the same opinion and selected the girl. The debut was not difficult: in Harry Potter and the Philosopher's Stone (2001), the red-haired wallflower had only one scene at King's Cross railway station.

From the second movie, Harry Potter and the Chamber of Secrets (2002), the role was more notable: Bonnie’s character entered Hogwarts, and the Dark Lord’s secret diary captured her conscious and soul. The artist showed intense emotions splendidly.

Further on, the young talent participated in Harry Potter and the Prisoner of Azkaban (2004) and Harry Potter and the Goblet of Fire (2005). Little by little, Ginny was developing as a character. She stopped being the girl who needed to be rescued and showed her abilities to the fullest; moreover, she got more screen time.

Although Wright’s character is not as popular as the golden trio of Harry Potter (Daniel Radcliffe), Hermione Granger (Emma Watson), and Ron Weasley (Rupert Grint), she is among the Hogwarts students who interacted with them most frequently in the fourth movie, along with Draco Malfoy (Tom Felton), Fred and George Weasley (James and Oliver Phelps), and Neville Longbottom (Matthew Lewis).

In Harry Potter and the Order of the Phoenix (2007), Ginny was among those who changed the story’s history; she joined Dumbledore's Army and fought evil. In Harry Potter and the Half-Blood Prince (2009), Bonnie’s character fell in love with Harry Potter; they made a couple and married eventually. This plot twist reduced Ginny’s popularity: some fans believed she did not deserve the young man.

Bonnie Wright had to face the same problem as other young actors playing the Hogwarts students: because filming took a long time, they grew older than their characters. However, the actress was quite short and slim; she weighed no more than 100 lbs. (50 kg.). Wright’s height is 5.51 feet (168 cm.).

Apart from the fantasy franchise, Wright played in the TV movie Stranded in 2002. It was an adventure drama about a family who had to survive on an inhabitant island. In 2004, she personified young Agatha Christie in Agatha Christie: A Life in Pictures.

After Harry Potter, Bonnie’s career slowed down for a while; the audience showed little interest in the low-budget dramas The Sea and Geography of the Heart. In 2012, the artist appeared in John Huddles’s After the Dark and Before I Sleep. The latter project is a sad story about a writer who became a voluntary hermit; however, loneliness was challenging for him. In 2014, Wright voiced Connie in My Dad Is Scrooge.

The same year, the woman starred in short movies How (Not) to Rob a Train and Sweat. The next year was marked with Those Who Wander that was never released.

In October 2015, the actress got the role of a children’s camp manager Diane in the comedy detective Who Killed Nelson Nutmeg? This family movie shows the children investigating the talisman squirrel’s mysterious death; Bonnie Wright’s character is the primary suspect.

Apart from acting, Wright created two short movies on her own money and wrote scripts for them; she liked the experience.

Besides, Bonnie is developing her modeling career and regularly takes part in glamorous photo shoots; magazines often publish her pictures. As the young woman says, she dreams of becoming a spokesperson for Miu Miu or Prada.

Bonnie Wright used to date Jamie Campbell Bower. The couple met at the movie set of Harry Potter. In the middle of spring 2011, the media reported about their engagement. Still, the young people did not marry and split up in June 2012.

In the mid-2013, the actress began to see Simon Hammerstein who was 13 years older than she.

Bonnie has a verified Instagram account and posts unformal pictures: riding a bicycle, going to a café, hand pictures, and selfies with friends. Casual photos are mixed with professional photos from social events and photos with other celebrities. More than 1.8 people follow the artist.

Wright is active in politics: she posted pictures and encouraged people to vote and choose the British Prime Minister; she did not support any particular candidate, though.

In 2016, the artist gained the role of Heidi in The Highway is for Gamblers.

In May 2017, the actress attended Comic Con in Phoenix. In June, she gave an interview about skin care and participated in a photo shoot for Into the Gloss magazine.

2018 was marked with the movie A Christmas Carol; the actress personified Nell.