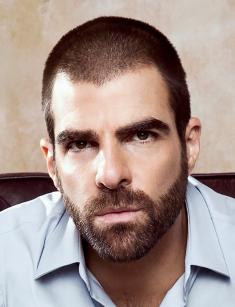 Zachary Quinto’s road to success was long; he became a star after the reboot version of Star Trek movies. His character, cold-blooded and firm Spock, has become the favorite of millions all over the world. Both the original franchise fans and newcomers loved his work.

Zachary Quinto was born in Pittsburg, Pennsylvania, on June 2, 1977. The actor has Italian and Irish roots.

The would-be celebrity’s childhood was darkened by his father’s death; the man died of cancer when his son was seven. According to the artist, the trauma determined his career choice. The mother had to become a bread-winner for the family, and Zachary’s elder brother, Joe, was responsible for the house; the burden was heavier than a boy of his age should carry. At that period, little Zachary felt unbearably lonely and compensated these feelings by inventing imaginary worlds.

The art of transformation helped Quinto clear his mind and work on painful issues. Besides, the boy loved comics, science fiction, and superheroes; he dreamed of becoming a part of the world with unlimited opportunities.

Zachary’s mother was a religious person and took her son to a Catholic school; the boy absorbed the ideas quickly. As a high-school student, Quinto was an activist and often participated in school performances. Eventually, the religious fleur disappeared, but the acting skills proved to be useful later.

In 1995, Quinto graduated from school and entered Carnegie Mellon University's School of Drama; it was one of the best schools in the United States. The talented youth earned teachers’ appreciation. However, Zachary did not join any significant projects; besides, small Pittsburgh could not give the young man what he really wanted.

In 1999, Zachary finished the university and went to Los Angeles. Despite his expressive mimics and height (6.17 feet or 188 cm.), the artist was visiting auditions for a year before he got a small role in the series The Others. Although he appeared in one episode, movie makers noticed the handsome, amiable man and began to give him secondary parts in other series, from little-known Six Feet Under to iconic Charmed and CSI: Crime Scene Investigation.

Zachary played only in one episode of each project. In 2003, he worked on the TV series 24 for a season.

Little by little, the actor was earning recognition, but it was almost impossible for him to receive a lead or even secondary part: Quinto participated only in episodes, even though directors themselves invited him, and movies and TV shows would become popular. Perhaps, it was the young man’s unusual type: he looked good as a non-standard character.

A couple of years later, Zachary Quinto had a secondary role in the series So Notorious; he appeared in ten episodes, but the project was closed quickly, and the actor was out of work again.

The situation improved in 2006: the man joined the series Heroes for four seasons and got the role of the antihero. It was a complicated character, and Zachary’s talent was noticed. In 2006-2007, the media often called him one of the best villains on TV. Heroes brought Zachary publicity, not fame: 10 million people was a significant audience, but not too many for the United States.

In 2007, Zachary took a chance and auditioned for the project that gave him international glory: Star Trek. The franchise is more than 50 years old; several generations of the American audience consider it iconic. The new series of movies became the reboot and referred to the original series broadcast in the 1960s. To make his character authentic, Quinto collaborated with Leonard Nimoy who played Spock in the original.

Soon, the actor found himself famous: many people liked his emotional interpretation of Spock. Quinto’s stage partner, Chris Pine, who played Captain Kirk, contributed to that.

In a while, the actor participated in other projects that strengthened his position. He appeared in two seasons of AHS and stuck in the audience’s memory for several cruel and ambiguous scenes with Sarah Paulson. Besides, the artist acted in the thriller Margin Call and produced it; the project was nominated for the Academy Award – Best Writing, Original Screenplay.

At the same period, Quinto began his theater career: he was invited to Broadway’s Angels in America and The Glass Menagerie. He also appeared in The Boys in The Band by the American playwright Mart Crowley; it was the story about LGBT people first staged in 1968; it was reconstructed 50 years later.

2013 brought the sequel Star Trek Into Darkness. Benedict Cumberbatch joined the cast and played the antagonist; his participation attracted many new fans.

In 2015, Zachary took part in another popular franchise: he played John Smith in Hitman: Agent 47, the movie adaptation of the video game series. The same year, the actor appeared in the drama I Am Michael about a gay activist who became a Christian pastor. James Franco personified the controversial main character.

In the crime thriller Hannibal, the artist had a guest role of Bedelia Du Maurier’s (Gillian Anderson) patient. Soon, he worked on the comedy Tallulah about a young woman who babysat for a wealthy family and created a kidnap plan. Ellen Page and Allison Janney starred in the movie as well.

In 2016, Quinto came back to Spock in Star Trek Beyond. The directors of the third reboot version changed, and many fans agreed that the project looked less like a classic Hollywood action movie, and the atmosphere was closer to the original. Star Trek Beyond was nominated for the Academy Awards – Best Makeup and Hairstyling but lost.

Soon, there were many rumors about another movie; however, the actors told journalists they had not seen the scenario. Even if the project will be created, it is unlikely to happen in the nearest future.

In 2016, the biographical drama Snowden by Oliver Stone expanded the man’s filmography. Zachary personified the American writer and lawyer Glenn Greenwald who collaborated with the famous programmer and published the majority of the data.

2017 was marked with the independent full-length movie Aardvark; it participated in Tribeca Film Festival in New York.

Initially, Zachary kept his personal life secret, like most of his colleagues, and explained he did not want to discuss sex. The true reason turned out to be a surprise for fans: Quinto was gay. He realized that as a teenager and gave a revealing interview in October 2011.

The actor used to silence his identity so that the scandal about his personal life would not interfere with his work. He used the opportunity to come out when he was at the peak of his success, without any career risks.

The actor told reporters how he chose the time for his coming-out: it happened after the news about a young man’s suicide; he was bullied because he was gay. The artist viewed his confession as the individual contribution to social tolerance.

Zachary Quinto used to date his colleague Jonathan Groff until the middle of 2013. They spent a year together and broke up peacefully: both actors seemed to have focused on their careers. They are on friendly terms now. The actor used to date Jonathan Groff.

In 2013, there were speculations about Quinto’s romance with the model Miles McMillan. In summer 2014, the celebrities confirmed that; the next year, the young men moved in together in Manhattan. However, McMillan is not Quinto’s husband yet.

At the end of 2015, Vogue called Zachary and his boyfriend a powerful couple whose influence on the country’s culture was substantial. Quinto’s popularity contributed to that. When the artist joined the Star Trek franchise, many fans took an interest in him and subscribed to his Instagram and Twitter. The man writes many posts about his movie and theater icons and also publishes pictures of his boyfriend.

The actor remains charming and handsome; he can play characters younger than himself. In 2018, Quinto participated in the adventure action movie Hotel Artemis. It is the story about a specially protected place where criminals can rest and receive medical help. Jodie Foster played the nurse who runs the organization.

In 2019, the audience will see Quinto in the horror series NOS4A2.

The actor’s net worth is $14 million.