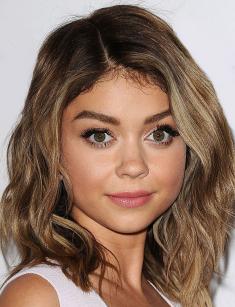 Sarah Hyland is a young star of the American cinematography. She has gained popularity after she took part in the series Modern Family and feature films Vampire Academy and Geek Charming.

The future actress was born in late autumn, on the 24th of November of 1990, in New York. Sarah was born in the creative family. Her father Edward James Hyland and mother Melissa Canaday are famous actors. Edward is working in the theater, and Melissa teaches acting skills. In 1995 the parents gave birth to the girl’s brother. The child was called Ian Donovan. The boy followed in the footsteps of his senior relatives and became engaged in the acting.

Since childhood, Sarah was fond of the vocal, ballet, jazz, hip-hop, theatrical dancing, tap dancing and performed with dancing classes in Lincoln center. When the girl turned nine years old, she was diagnosed with polycystic dysplasia of kidneys. In 2012 the girl had surgery on the organ transplantation. Her father gave a healthy kidney to his daughter.

Sarah Hyland traveled a lot with her father. During some time she studied at home. Later, she attended schools in different states. When Sarah passed to the 6th class, she entered Professional Performing Arts School. She graduated in 2008. At the age of eighteen, she moved to Los Angeles.

Sarah began his creative biography since the age of four. Then she took part in the advertising videos and voiced-over the videos. At the age of five, the girl received the role of Howard Stern's daughter in the movie Private Parts. Then she appeared in the romantic movie The Object of My Affection in which the leading roles were performed by Jennifer Aniston and Paul Rudd.

It was an unusual experience for young Sarah: she had to embody not only the character but a real living person, who was an object of admiration of the 20th century. The same year the actress appeared in the TV series under the title Annie and the movie Joe Gould's Secret. In the last movie, she was successful to work together with Stanley Tucci and Ian Holm.

In 2009 the actress took part in the shootings of the pilot episode of the series Modern Family. The girl received the role of the oldest daughter called Haley Dunphy. A year before this the actress enriched her filmography with the role of Brooke Shields’s daughter in the TV series Lipstick Jungle. Modern Family was met positively, and at present, the series is one of the most popular series on American TV screens.

Sarah Hyland with the actor’s cast of Modern Family four times became the owner of American Screen Actors Guild Awards for Best Series Cast. The girl was marked out in 2013, and she received the award for Best Supporting Actress.

In 2011 the actress became the producer of the picture The Man at the Counter. The same year there was released the romantic comedy Geek Charming based on the short story written by Robin Palmer. Sarah performed the leading role of the popular schoolgirl called Dylan Schoenfield. The boyfriend of the girl Matt Prokop became her colleague on the movie set.

In 2012 Sarah took part in the creation of the tragicomedy Struck by Lightning. The movie was premiered at Tribeca Film Festival. Carson Phillips received the major role of Chris Colfer.

The year 2014 was marked by the release of two movies with the participation of Sarah: Date and Switch and Vampire Academy. The second movie is a screen version of the first part from the series of books written by Rachel Meade. Hyland performed the role of Natalie Dashkov – the daughter of the antagonist.

On the movie set, the girl got acquainted with Zoey Deutch, Lucy Fry and Dominic Sherwood. The Russian actor Danila Kozlovsky performed one of the leading roles.

In 2015 the world saw the movie See You in Valhalla. It’s the comedy-drama which plot is focused on the girl called Johana Burwood. After the death of her brother, she returned to her native town and her family, with which she lost connection a long time ago. Sarah performed the leading role.

In 2016 the actress took part in the horror movie which genre was new for herself. The audience saw the girl in the picture Satanic. In 2017 there was released the series anthology under the title Dimension 404. Sarah appeared in the second episode of Dimension 404. The girl received the role of the character called Chloe.

Then she took part in the movie Dirty Dancing and the fantasy series Shadowhunters: The Mortal Instruments. In Dirty Dancing Sarah performed the role of Lisa Hausman. The picture became the remake of the movie of 1987. Generally, this film received negative feedback. The audience didn’t appreciate the new version of the movie.

In 2008 the girl took part in the casting for the role in the musical called High School Musical 3: Senior Year. Here she got acquainted with the actor Matt Prokop. The young people began their relations in 2009 when Sarah moved to Los Angeles. In a short time, the lovers started living together. In 2014 the romantic couple broke up.

At first, the representatives of the couple said that Sarah and Matt had separated peacefully and decided to stay friends. But in a short time, it became obvious that the girls addressed the lawyers for help so that they could protect her from her former boyfriend.

It turned out that during one of the quarrels Matt began to smother Sarah. Moreover, Hyland told that Prokop threatened to kill the girl’s dog and to set her house on fire. In September of 2014, Matt was banned from approaching Hyland. After this, he continued to publish the messages to Sarah in the social networks with the declarations of love.

During the shootings of Vampire Academy, Sarah got acquainted with Dominic Sherwood who performed the role of Christian Ozera. In February of 2015, the young began to have romantic relations. They often appeared in public and didn’t conceal their tender feelings to each other.

In February of 2017 Sarah warmly congratulated her beloved man with the second anniversary in one of the social networks. However, in a short time, they began to have some problems in their relations. The insiders told that Sarah and Dominic separated in August of 2017 but stayed friends. Their relations came to an end.

Since November of 2017, Sarah has relations with the American showman and participant of Bachelor in Paradise reality show - Wells Adams. For the first time, the couple was noticed together at Halloween party. The lovers regularly post their joint photos in their microblogs on Instagram. On the 14th of February, 2018 Sarah posted a photo with Wells and signed it with some nice congratulation.

The actress was accused of anorexia, of promotion of unhealthy lifestyle and of having too much plastic surgery. In reply, the girl publicly appealed to the editors of the editions asking him to stop making silly statements.

At present, the actress continues to take an active part in the movies. The series Modern Family was prolonged up to 2019.

On the 11th of March, 2018 the girl attended the iHeart Radio Music Awards ceremony. 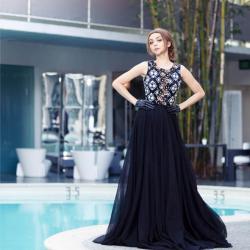