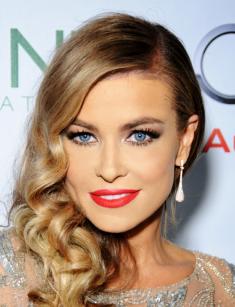 Carmen Electra in her childhoodTara Leigh Patrick was born on April 20, 1972, into the family of musicians, Patricia and Harry Patrick. The girl was their sixth child. The would-be singer has Irish, German, and Cherokee roots.

Tara took up dancing early and even gained a victory at her first dance competition when she was five.

At the age of 18, Tara left for Mason, Ohio, to work at the Kings Island amusement park. She participated in the show “It's Magic” and earned the first success; inspired, the young woman decided to try herself in Hollywood.

The meeting with the then superstar Prince opened the road for Tara: the famous singer offered her to participate in his show and changed her name for the bright stage name “Carmen Electra”. According to Prince, Tara was as passionate as Carmen and as divine and spotless as the daughter of the ancient Greek king.

Carmen created her first album Carmen Electra under Prince’s guidance; the audience did not pay much attention to it. However, the adventurous woman did not feel upset: she changed her image and joined the strip show owned by Prince; simultaneously, she went to auditions to Hollywood projects as an actress. Thanks to the naked pictures from the Playboy hot photo session, the young woman grabbed producers’ attention. It was the right step: she received many invitations to TV projects, MTV channel, and the auditions for the popular series Baywatch.

The auditions were successful; Carmen got the role that Pamela Anderson used to have; by that time, the latter had breast surgery, and her cup size changed from two to four. Following the first acting achievement, Carmen enjoyed four nude photo sessions for men’s magazines.

Gradually, Carmen Electra started receiving invitations from Hollywood producers; however, most of the projects were low-budget: Good Burger, Starstruck, The Mating Habits of the Earthbound Human. In 2000, the woman appeared in the black comedy Scary Movie and got the Golden Raspberry Award for Worst Supporting Actress.

Nevertheless, the artist was not disappointed: the movie was quite popular among the audience and grossed enough.

By that moment, Tara had a challenging period: her mother and sister died; Patricia had a malignant brain tumor. Carmen became a generous and conscious charity worker: she created the fund for people with brain cancer and the organization helping children with oncology.

The woman continued to work on movies, participated in Las Vegas dance shows, and voiced a character in The Simpsons. The role of an injured golfer in an episode of House was particularly notable; the audience also remembers her in the parody police action movie Starsky & Hutch. The latter brought the actress the MTV Movie Award for Best Kiss.

In 2005, Carmen Electra followed the example of the women’s aerobics discoverer Jane Fonda and created a series of aerobic striptease lessons. Tara had had much experience in dancing, so it was not difficult for her to create a collection of light exercises for beginners. Many women got the chance to learn these movements in front of their TV sets. Due to the low cardiovascular stress load, obese people could use the exercises and start losing weight.

The celebrity has always had many admirers. Rumors had it the actress was dating her mentor Prince.

Carmen married her first husband, the basketball star Dennis Rodman when she was 26. The couple’s height difference was 1.48 feet (45 cm.). However, what surprised people more was the short time of the marriage: the woman filed for divorce the next week after the wedding. The reason is still unknown; many media guesstimated that fragile Carmen was abused.

The actress had a short-term relationship with Pamela Anderson’s ex-husband Tommy Lee; they even reunited in 2017 to break-up again. In 2003, she married the rock guitarist Dave Navarro. The couple spent five happy years together; later, Carmen initiated the divorce.

In 2008, the paparazzi noticed the star with another “bad boy”, the guitarist Rob Patterson. They split up in 2012.

The actress has no children. However, she does not seem to worry about that: the woman considers giving birth to a kid or adopting one. Besides, the recent rumors have it Carmen Electra is seeing Clifton Collins Jr.; the couple was spotted at the HBO Golden Globes afterparty in 2018.

Today, Carmen Electra continues to be one of the most attractive and sexiest women all over the globe; tabloids regularly include her to top 20 or top 30 beauties. Indeed, 47-year-old Carmen looks amazing, and her Instagram photos prove that. Some fans believe she has become more beautiful now than in the 1990s.

Carmen does not hesitate to use medical means. She had breast and lip surgery and rhinoplasty. The woman loves various scrubs and body wraps; she regularly has beauty injections, too.

The actress wrote the book How to Be Sexy and gave recommendations to those who lacked self-confidence and wanted to become more liberated.