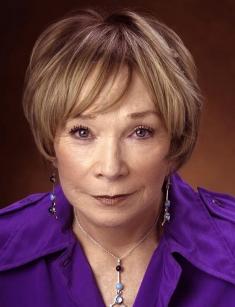 Shirley MacLaine is an American actress, director, scriptwriter, and producer; she used to be a singer and a ballet dancer. She created a series of autobiographical works that described her opinions, traveling all over the world, and Hollywood career. The woman has been nominated for the Academy Award and gained the Kennedy Center Honors for her lifetime contribution to the American culture.

Shirley MacLean Beaty was born on April 24, 1934, in Richmond, Virginia. She was named after the actress Shirley Temple.

The parents brought up the kids in the Baptist traditions. When Shirley was small, the family often moved from one place to another: Richmond, Norfolk, Waverley. Finally, they settled in Arlington; this is where MacLaine went to Thomas Jefferson Junior High School. Shirley played baseball in the boys’ team and broke many home-run records.

The girl used to have weak ankles; she often fell and got injured. The mother decided to take her three-year-old daughter to the Washington School of Ballet. The future artist loved the scene; she never missed classes. Because there were no boys in her group, tall Shirley played male characters in classic performances, such as Romeo and Juliet and The Sleeping Beauty.

One day, Shirley had her ankle broken right before Cinderella where she got the role of the fairy godmother. However, she played her part despite the trauma. Young MacLaine had to give up the professional ballet career: she was too tall and thin (her height was 5.58 feet, and her weight was 127.87 lbs.) and could not master the technique.

Before her final school year, MacLaine went to New York to Broadway. She joined the dancing ensemble of Me and Juliet in 1953-1954; further on, the young woman became an understudy for Carol Haney in the musical The Pajama Game. In May 1954, when Carol got injured during a rehearsal, MacLaine replaced her for several months. This is when the producer Hal B. Wallis noticed her. Soon, Shirley signed a contract with Paramount Pictures.

The actress debuted in Alfred Hitchcock’s The Trouble with Harry in 1955 and received the Golden Globe nomination for New Star of the Year – Actress. The roles in Around the World in 80 Days and Artists and Models with Dean Martin and Jerry Lewis followed.

In 1958, the woman collaborated with Dean Martin and Frank Sinatra in Some Came Running. The project brought the beginning star her first Academy Award nomination. The second one took place two years later when Shirley appeared in the movie The Apartment with Jack Lemmon. It was the sequel of Some Like It Hot. The project got five Oscar nominations. MacLaine could have received Best Actress, but Elizabeth Taylor won it. The Apartment brought Shirley the Golden Globe, though.

In 1961, the artist co-starred with Audrey Hepburn in the drama The Children’s Hour based on Lillian Hellman’s play. Critics appreciated the story about two women who owned a private school and got accused of a lesbian affair. Later on, Shirley appeared in the comedy My Geisha with Yves Montand and played two parts at once.

The melodramatic comedy Irma la Douce gave another chance to collaborate with Billy Wilder and Jack Lemmon. Marilyn Monroe was supposed to take the role of the charming main character. Shirley was nominated for the Academy Award in 1964 but failed; she received the Golden Globe for Best Actress – Motion Picture Musical or Comedy.

The 1960s were marked with many projects: the western Two Mules for Sister Sara, Gambit, Woman Times Seven, The Bliss of Mrs. Blossom, Sweet Charity, What a Way to Go! Whenever the actress had some spare time, she worked on her own movies. In 1975, she directed the documentary The Other Half of the Sky: A China Memoir together with Claudia Weill; the problems of the Chinese women were discussed. The movie was nominated for Oscar in 1976.

At the same period, the woman participated in the series of concerts at the London Palladium and New York's Palace Theatre. The album Shirley MacLaine Live at the Palace with the recordings of the latter show was released. A Russian director Andrei Konchalovsky was present there; inspired by the artist’s work, he was going to invite her to the movie Siberiade, but she had no time. Eventually, Yelena Koreneva who bore some resemblance to Shirley was given the part.

In 1977, MacLaine portrayed a retired ballet dancer in The Turning Point with Anne Bancroft; the character was similar to the actress herself. The project was nominated for the Academy Award.

Later on, MacLaine appeared in Steel Magnolias with Sally Field and Julia Roberts, Postcards from the Edge with Meryl Streep, Guarding Tess with Nicolas Cage, and so on.

MacLaine has appeared in many TV projects including the autobiographical mini-series Out on a Limb based on her book. She participated in Joan of Arc, Hell on Heels: The Battle of Mary Kay, and Coco Chanel. Fans could see their favorite in the third and fourth seasons of the British drama Downton Abbey (2012-2013) where the woman played Martha Levinson. In the 2000s, Shirley worked on Bernie, The Secret Life of Walter Mitty, Wild Oats.

Young MacLaine was fond of esotericism. As soon as she read Frederick S. Oliver’s book A Dweller on Two Planets (1986), the woman’s life changed. The idea of communication with other civilizations, reincarnation, and transformations grabbed her attention, and she took an interest in spiritual practices and metaphysics; these themes dominate in her bestsellers.

In the memoirs Dancing in the Light, the artist described her romance with Andrei Konchalovsky and reflected on the mysterious Russian soul. In Going Within, Shirley shared the program of spiritual techniques and exercises that helped become healthier and happier and feel the natural harmony with the outside world and inside oneself.

Dance While You Can is full of personal thoughts and feelings about aging, relationships, work, parents, motherhood, and pondering on the professional future. I’m Over All That: And Other Confessions is different from other works: it is a funny description of the actress’s career.

In 1954, Shirley married the businessman Steve Parker; their daughter Sachi Parker was born in 1956. Steve became a husband and mentor for the artist; however, their relationship was open.

Parker and Sachi lived in Tokyo where the man had a Japanese lover. Shirley knew about that and had fun in Las Vegas as a part of Frank Sinatra’s Rat Pack. Its members did not even know Shirley was married.

MacLaine met Robert Mitchum at the movie set of Two for the Seesaw. They had a romance darkened by the scandals with the actor’s wife.

In a while, Shirley came back to her family in Tokyo; she was working on the movie My Geisha. The couple seemed to be happy, yet the actress did not feel satisfied with one man; soon, she had an affair with Yves Montand. Steve ignored his wife’s flings.

Hollywood knew the actress for her feelings to the majority of her stage partners except for Jack Lemmon and Jack Nicholson; however, these connections were short-term. In 1977, MacLaine fell in love with the Prime Minister of Sweden Olof Palme.

MacLaine and Parker were married for 28 years. They divorced in 1982 when the actress learned that her husband was telling her lies about everything: himself, his parents, and work. As it turned out, Steve was a gigolo who did not earn a penny and spent his wife’s money.

Shirley was shocked and thought about suicide. Fortunately, she pulled herself together, took her daughter, and went on. Although the woman dated other men, she did not marry again. In the 1980s, Shirley was seeing the director Andrei Konchalovsky when he was in Hollywood.

Today, Shirley MacLaine lives in Malibu and works on new movies and literary projects. The woman is full of energy and walks her dog, Terry, every morning.

2018 brought the family movie The Little Mermaid; the actress played an old lady who told her grandchildren a story where she was a character.