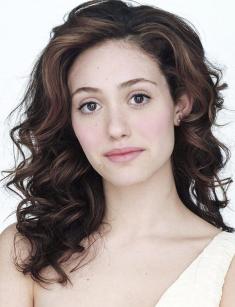 Emmanuelle Grey Rossum is an American actress and singer, who received recognition after the release of the movies Mystic River, The Phantom of the Opera, Poseidon, and the television series Shameless. Which is more, she released a solo album which hit the top of the charts and is actively engaged in social activities.

Emmy was born in New York City to a single mother, Cheryl Rossum. The girl's parents divorced before their daughter was born, and she saw her father twice in her life. An interesting fact is that the actress has a famous relative (by marriage), Vera Wang, an American fashion designer of wedding dresses who is married to Emmy's uncle.

Emmy's mother worked as a photographer and investment banker, so she had enough money to raise her daughter.

The little girl got her name in honor of her grandfather, Emmanuel, but it was adapted a female version.

From an early age, Emmanuelle showed an interest in art, so the mother decided to enroll the girl to the Metropolitan Opera Children's Chorus. At the audition, 7-year-old Rossum sang "Happy Birthday" in all 12 keys. Within five years she performed with the choir and managed to work with such legendary singers as Plácido Domingo and Luciano Pavarotti.

By the age of 12, Emmy got tired of singing children's repertoire. She became interested in acting, took lessons of acting skills and participated in castings. Emmy played several children's roles.

Due to the filming process the girl had no opportunity to attend school properly. However, she received her school-leaving certificate and even got higher education. Emannuelle Rossum completed the school programme via online-extension courses offered by Stanford University's Education Program for Gifted Youth (EPGY). Later, she received the diploma of Columbia University thanks to distance learning.

At first, Emmy Rossum starred only in television projects, such as the series Law & Order, A Will of Their Own, Snoops, and television feature films Grace & Glorie, Only Love and Genius. The girl was nominated for a Young Artist Award for her role in Genius. Young Rossum participated in the biographical drama The Audrey Hepburn Story, where she played the role of the legendary actress in her early years.

Emmy Rossum appeared on the big screen in 2000 in the musical Songcatcher, but the actress received recognition thanks to the movie Mystic River by Clinton Eastwood Jr.

The actress gained even more public recognition after the release of The Phantom of the Opera. And Interestingly, Emmy was the last candidate on the casting list but managed to outshine the impression of all the competitors and leave them behind.

The actress received three prestigious awards and a Golden Globe Award nomination for Best Actress for the role of Christine Daaé.

Later, the actress appeared in the disaster film Poseidon, drama You're not You, youth fantasy Beautiful Creatures and the film adaptation of Japanese manga Dragonball Evolution, which Emmy calls her most challenging work.

On the set of Poseidon, the actress starred opposite Josh Lucas and Kurt Russell. It is noteworthy that the movie received both the nomination for Oscar and Golden Raspberry Awards.

Throughout recent years, the actress again has had a fruitful cooperation with the TV. She is starring in the popular television series Shameless, where portrays the oldest daughter of the protagonist. The audience appreciated the story of a broken home headed by a single father with alcohol dependence. And Emmy had a chance to try herself as a director in this project.

A year earlier, the world saw the movie Comet. Emmy Rossum not only performed one of the roles but also acted as an executive producer of the film. The movie was shown at the Los Angeles Film Festival.

After the release of the musical, The Phantom of the Opera Emmy Rossum received an offer to record an album of classical music. And Rossum decided to record her debut album. As the actress admits later, she is shocked by the songs that we hear on the radio today, as they do not carry any emotional component.

Emmy refused to focus on the style of popular Britney Spears and Christina Aguilera. The artist found inspiration for her first album Inside Out released in 2007 in the songs of Madonna, Barbra Streisand, Cher, and Dolly Parton. The album was ranked among the top 200 albums according to Billboard, and the song "Slow Me Down" was the most successful.

In 2008, Emmy Rossum began recording her new album but finished working on it many years later. The album Sentimental Journey was released in 2013 and immediately hit the top 10 and headed the list of jazz catch-ups. The song "Pretty Paper" was recognized as the most successful composition of the album.

The first Emmy Rossum' boyfriend was her friend, David Wildenstein, with whom she was dating for two years. Later she had an affair with actor Topher Grace, the star of the movies Spider-Man 3 and Predators. And in 2008, Emmy married music producer Justin Siegel. The couple's relationship lasted almost a year and a half. The reasons for their divorce are unknown to the public, but it is known that Siegel was the one who filed for divorce.

Later, Emmy said that at the time of marriage she was quite young and didn't understand what marriage was.

After a joint tour with the rock band Counting Crows, Rossum dated the leader of the band, Adam Duritz. The next lover of the actress was Tyler Moore, a colleague on the set of the series Shameless.

On the set of Comet, the woman met an American director and screenwriter Sam Esmail. In 2015, Sam proposed to Emmy, and she said yes. Later in the interview, Emmy said that she didn't care about the wedding celebration, so she asked a wedding organizer company to prepare the ceremony. On May 28, 2017, Sam and Emmy became husband and wife.

Emmanuelle Rossum has celiac disease, which means she is allergic to those foods that contain gluten or wheat. This circumstance is remarkable for the fact that the woman is good at cooking, knows a lot about the cuisines of the world and even has taken a course of the school of culinary art Le Cordon Bleu in London.

Emmy Rossum is an ambassador for Youth AIDS and PiNKiTUDE organizations. Moreover, the actress is concerned about environmental problems. She appeared in commercials for the protection of natural resources.

In 2009, Emmy participated in a protest against the ban on the legalization of same-sex marriages.

Emmy Rossum is friends with Leighton Meester, the star of the series Gossip Girl, and a singer Ashlee Simpson.

Like many Hollywood stars, Emmy has an official account on Instagram. She shares with followers personal photos, backstages, and frames from movies. And the actress loves to make Stories on Instagram, where she tells fans about the current events of life.

Now Emmy Rossum is engaged in filming and is active in social work. On February 27, 2018, the actress participated in the charity program Stories from the Front Line.

The acting career of the artist is moving up. In November 2017, the television series Shameless was officially extended for the ninth season. The last episode of the eighth season showed the highest ratings of the series since 2013.

In January 2018, viewers saw a biographical comedy A Futile and Stupid Gesture directed by David Wayne. Emmy Rossum played one of the roles in the movie. The plot of the movie is focused on the difficult fate of Doug Kenney, who was one of the founders of the National Lampoon magazine. In the 1970-s, this magazine had a significant impact on American culture.

The movie Cold Pursuit, an American black comedy action film directed by Hans Petter Moland, was released in 2019. Emmy played the lead role in the film.