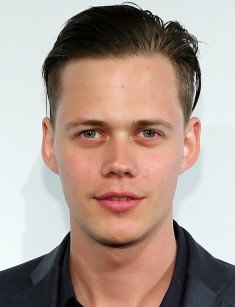 Bill Skarsgård was born on the 9th August of 1990 in the biggest city of Sweden – Stockholm. The future actor grew up and was brought in the creative atmosphere, as his father Stellan John Skarsgård is a famous stage and movie actor, the prize-winner of Berlin Film Festival. This talented man is familiar to TV spectators due to the roles in the movies The Girl with the Dragon Tattoo (2011), Thor (2011) and The Avengers (2012). And what about Bill's mother she didn’t choose the acting path: by his specialty, Mrs. My Gunther is a physician.

In general, the spouses have six children in their family. Sam, Gustaf, and Alexander have also connected their life with the acting. It’s known that the relationship of Stellan and My have failed and Bill’s parents have decided to divorce. Later the head of the family has proposed to Megan Everett who gave birth to two children of her beloved man: Ossian and Kolbeyn. There is information that Bill, as well as his brothers, began to have fancy for the acting since early childhood. The boy was watching films and then parodied what he had seen showing these improvised sketches to his parents.

When the boy turned nine, he had his debut in front of the director's cameras. It was the Swedish thriller under the title White Water Fury (2000), not known to the Russian spectators. In this movie, Bill Skarsgård played together with his brother Alexander. But this movie hasn't brought Bill popularity as for the young actor, first, the role was episodic, and second, the picture was shot by not a famous director.

By gossip, when Bill began to attend the school, some time later he got more distant from the acting skills, and he even wanted to become a scientist. But the destiny of the young man has made some changes: after the guy had taken part in the episodic role of the adventure fighter Bill Skarsgård in the movie Arn – The Kingdom at Road's End (2008) together with Stellan and Gustaf, he became conscious of the fact that it was his calling to be in the immense movie world.

The same year 2008 Bill took part in the Swedish series Livet i Fagervik and some time later appeared in the movie Kenny Begins of 2009, directed by Mats Lindberg and Carl Åstrand. In the latter movie, he performed one of the significant roles. This fantastic movie tells about Kenny (Johan Rheborg) who, to his parents’ regret, is the most careless student in all Galaxy.

Two years later Bill Skarsgård took part in the comedy: that time he participated in the movie Simple Simon (2010) which plot is focused on the eighteen-year-old Simon who suffers from Asperger's syndrome. The fact is that for his normal existence there should be the perfectionism in the guy’s life: the young man wants to have an order in everything, even in the love affairs of his brother. But after the girlfriend leaves Sam (Martin Valstrem), the real chaos begins in Simon's life.

The same year 2010 Bill again enriched his creative biography with a significant role in the Swiss drama Behind Blue Skies. This picture tells about the young man who escapes from his father-alcoholic hoping to find a better life. In 2012 Bill Skarsgård participated in the episodic roles in the screen adaptation in the world-famous novel Anna Karenina written by Leo Tolstoy in a modern interpretation. In this movie Keira Knightley, Jude Law, Aaron Taylor-Johnson and Kelly Macdonald received the major roles.

Later the talented actor enriched his filmography with the participation in the shooting of the Norwegian melodrama under the title Victoria (2013). In this movie, the spectators saw the relations similar to those of Romeo and Juliet: the daughter of the wealthy landowner has feelings to the poor miller’s son. However, the girl's father is strongly against such misalignment and wants that Victoria gets married to the rich cadet Otto (Bill Skarsgård).

The same year 2013 the handsome young man ( the actor is 192 cm tall and weighs 85 kilos) changes the image of the romantic actor and starts acting in the chilling series Hemlock Grove of Netflix production. The plot of the horror series tells about the invented town in the State of Pennsylvania. But rather quiet living of the inhabitants in such den of iniquity falls apart in an instance after the mysterious murder of the pupil from the local school.

The spoiled guy Roman (Bill Skarsgård) and his friend Peter Rumancek (Landon Liboiron) investigate the awful crime. Also, Penelope Mitchell, Freya Tingley, and Dougray Scott were included in the cast of this movie. In 2016 Bill performed in the third part of the anti-utopia franchise written by the novel of Veronica Roth -Divergent, Divergent, Chapter 3: Behind the wall. To Bill Skarsgård has got luck to work with such movie celebrities as Shailene Woodley, Theo James, and Jeff Daniels.

There are still no rumors about the love affairs of Bill Skarsgård. The guy doesn’t share the photos with his beloved girl on his Instagram page and doesn't write about this in his blogs on Twitter. That's why his female fans can only guess if the tall, blue-eyed brown-haired man has a girlfriend or not. Though, in 2011 the journalists captured the young man with some Clara Girell. Also, according to the gossips, the actor had a love affair with Alexis Knapp.

Bill has a great sense of humor and can play the guitar. The actor often spends his spare time with his friends. By the way, some fans of the guy notice his surprising similarity in the appearance with Steve Buscemi.

The year 2017 became plentiful for the actor: he took part in the drama Battlecreek and also in the sensational thriller Atomic Blonde in which he collaborated with Charlize Theron, James McAvoy, John Goodman. Also, the fans of Stephen King's creative work and just the fans of horror movies are looking forward to the premiere of the picture under the title It which is set for the autumn of 2017. Bill Skarsgård has transformed into the ominous clown who kidnaps little children.

The director Andrés Muschietti also offered to play the role of Pennywise to Mark Rylance and Ben Mendelsohn. Tim Carry who performed in the original movie It (1990), received the same offer but he denied this invitation. It’s worth noting that Bill has thoroughly prepared for this role: he spent a lot of time on the movie set and communicated with the movie creators. The actor confessed that he wanted to tribute to Carry who has brilliantly played the awful personage.

Moreover, by hearsay, in a short time, the actor will appear in a couple of movies and series under the title Castle Rock (2018). 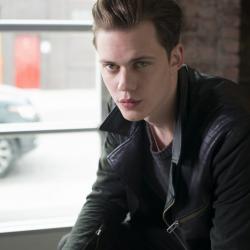