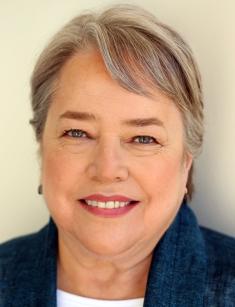 Kathy Bates is famous for numerous roles in movies and television series. Her works are marked by the Oscars, two Emmy Awards and the Golden Globe Awards. The director's works, dramatic roles and social activities are less known to Russian viewers, although they also deserve attention.

Kathleen Doyle Bates was born on June 28, 1948, in a family of Irish Americans. As far as we know from the biography of Kathleen, there were not people who fully devoted themselves to the service of art among her ancestors. The grandfather of the actress, Finis L. Bates combined creative writing with a law service. Her great-great-grandfather was the personal physician of the U.S. president Andrew Jackson.

Langdon Doyle Bates, the father of the actress, was a successful mechanical engineer. The celebrity's mother, Bertye Kathleen, was a housewife. She had two older sisters, Patricia and Mary. The family lived in Memphis, Tennessee. The future star graduated from high school, gained experience in the school drama club and chose the path of her life in this city.

Bates graduated from Southern Methodist University with a bachelor's degree in theatre arts in Dallas in 1969. Cathy went to conquer New York like many aspiring actresses before and after her. And it did not submit at once. The girl had to work as a cashier and a pizza delivery girl in anticipation of the main roles in Hollywood and Broadway.

Kathy was able to play her first film role only in Taking Off in 1971, where she sang the song Even Horses Wad Wings. A small episode did not become a stepping stone in the film career. Since 1973, the actress was busy in small theatrical roles but she was famous among the directors, when she played Crimes of the Heart, in 1978. Subsequently, film critics suggested that the young actress was lost in the crowd of the same beauties who dreamed of a career of movie stars.

Recognition came to Kathy Bates after maiden angularity turned into mature womanhood. Bates was noticed after the release of the film Straight Time. The young actress worked together with Dustin Hoffman on the set, who knows how to ignite the talent of all those present on the set.

After 1978, the actress was offered roles, which were worthy of her talent. In the 80s, she works a lot: she played in Broadway productions and starred in the small but numerous roles on television.

After the release of the movie Misery, Kathy Bates woke up famous. The actress received the Oscars and the first Golden Globe for the role of Anne Wilkes, a crazy fan of the writer, holding the idol in captivity. Photos of happy Bates with gold in her hands appeared in magazines. Fans began to recognize her on the streets and ask her for autographs.

The actress was good at the role in horror movies. She manages to show the tense of the atmosphere of an oppressive fear, which is a characteristic of Stephen King's novels. Kathy's heroines are simple women, who are not noticed in everyday life. But they have emotions and hide terrible secrets inside.

But comedy is inimitable in her execution. A collection of prestigious awards brought to the actress a comedy role of Helen Kushnick in the film The Late Shift. The audience remembers "unsinkable Molly" from Titanic. This cult film brought together such a constellation of actors that Bates did not receive any awards in any of the nominations, in which she was presented.

Since 2013, Bates starred in the television series American Horror Story, playing memorable supporting roles there. The actress received the Emmy Award for the role of Delphine LaLaurie in the third season of this series, the second for participation in a comedy series Two and a Half Men. Kathy appears as the ghost of a libertine, who was forced to spend eternity in a female body.

Bates's directorial works have not yet gained international fame. But in 2004, Kathy was nominated for the Directors Guild of America Award for outstanding directing drama series for the production of the television series Six Feet Under. So, the aspiring director can see the vertices that he wants to conquer.

Kathy was married once. In 1991, Bates married a colleague Tony Campisi. They broke up after six years. The actress has no children.

In 2003, Bates was faced with cancer. With the help of surgery and chemotherapy, she managed to defeat ovarian cancer. The disease returned nine years later, affecting her chest this time. Doctors saved Kathy's life by removing both breasts. However, health problems do not prevent the woman from working actively in the film industry and engage in social activities.

In June 2016, Kathy Bates took part in the shooting of a video dedicated to the victims of the tragedy in Orlando. The actors told biographies of people, who were killed in a nightclub at the hands of murderers. On September 20, 2016, there is a star on the Hollywood Walk of Fame in honor of Kathy Bates. Kathy Bates has a net worth of $32 million.

In the spring of the same year, the shooting of the film The Death and Life of John F. Donovan began, in which the actress plays the role of the manager of the protagonist. While working on the film, the crew visited New York, Montreal, London and Prague. The fans of talent wait for the release of the film, scheduled for 2018.