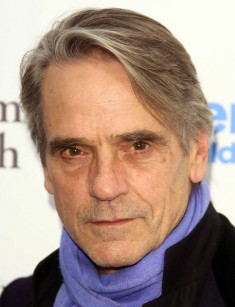 Jeremy Irons is an English stage and movie actor who has always preferred more profound and expressive pictures to the high grossing movies. The major feature which highlights the versatility of the actor's talent is that he is not afraid of controversial and provocative roles. He gets engaged in his work being completely conscious of what is demanded from him.

Jeremy John Irons was a son of the accountant Paul and his wife Barbara Anne who was a housewife and brought up their three children. Except for Jeremy who was born on the 19th of September, 1948 (he was the youngest one) there were two more children in their family - the son Christopher and the daughter Felicity. The family lived in England, in the small village of Cowes situated on the Isle of Wight. Jeremy spent his childhood in rural areas, and it has given its results: since early childhood, Jeremy swam perfectly, and c could cooperate the boat.

Even though during his studies at Dorset school John was a member of the music band (the actor played the harmonica and percussions) and regularly attended the sections of acting skills. The ambitious guy wasn’t going to connect his life with the creative profession. The boy's love for animals brought the young man to the veterinary school. It's true that he hasn't managed to get there.

Irons had his turning point in his life when he received a part-time job at the theater as an assistant of the property man. The boy was inspired with the atmosphere of the theater, and he enrolled to the acting course at the well-known Bristol Old Vic Theatre. Having studied here for two years, Jeremy relocated to London and soon received his first role in Roundhouse Theatre. In the middle of seventies, Jeremy Irons managed to break through on the television. The beginning actor performed episodic roles in the series Notorious Woman and "costume" series Love for Lydia.

In 1981 the actor got the major role in the TV series shot by the novel Brideshead Revisited of Evelyn Waugh and got Golden Globe Awards. The screen adaptation of the book The French Lieutenant's Woman written by John Fowles also brought the actor the nomination for the Golden Globe Awards. The actor performed two roles in this picture at the same time: the Darwinian aristocrat Charles living in England of the Victorian epoch and the contemporary actor Mike. The well-known actress Meryl Streep became Irons's partner on the movie set.

In the eighties, the actor continued to embody the characters who were in a rush in attempts to find themselves in this world. Irons played a role in the melodrama under the title Swann in Love, in Cronenberg’s thriller Dead Ringers and the dramas Betrayal, The Mission and Moonlighting. In 1990 the role of the representative of the high society who was accused of the attempt of his wife’s murder (the detective story Reversal of Fortune) had brought Irons the prize of Academic Awards. The image of the "the intelligent suffering man" has played a role in the further Jeremy's acting career.

In 1991 John tried himself in the image of the writer who wasn’t understood by his contemporaries. He took part in the biopic Kafka directed by Steven Soderbergh. In 1992 the actor appeared in the movie Damage. The character of Irons is Stephen who is a successful politician and a wonderful family man. Falling into the trap of the minute weakness, he started the illicit relationship with the future bride of his son (Juliette Binoche). The uncontrollable insane desire will rather make him the happiest person in the world destroy his life into the dust.

The next year Irons performed the role of the French diplomat who had no idea that his mistress (the star of the Beijing opera) was a man (the movie M. Butterfly). In 1997 the actor enriched his filmography with the sensational drama, Lolita. Together with the actress Dominique Swain, Irons presented to the audience the story of the overwhelming love of the mature man and young, capricious nymphet.

In 2002 there came out the drama And Now... Ladies and Gentlemen directed by Claude Lelouch. At the same time, the picture is easy and complex for perception. It’s light because of the romanticism, adventures and love story, and it’s difficult because of the simple human sufferings and uncertainty of the future of the incurably sick heroes. The charming actress Patricia Kaas became Jeremy's partner on the shooting stage. Later, the well-known singer would tell at the program of Yuliya Menshova - Alone With All that the screen kiss with the Oscar-winning actor Irons meant to her.

In the middle of 2000-s, the actor took part in the movies The Time Machine, Kingdom of Heaven, Casanova, Eragon, and Appaloosa. In 2012 the actor took part in the documentary movie Trashed. The film directed by Candida Brady told about the danger of the waste pollution of the earth, air, and water. Jeremy got the role of the host and began his documentary overview of the hot spots of the planet from the Lebanese dump situated on the coast of the Mediterranean Sea.

Even though the slender expressive Irons has nothing similar in appearance with his character Pope Alexander VI who grew fat because of his numerous vices, nobody will reproach the British actor hasn't coped with his role in The Borgias (2011-2013). No doubts that Jeremy distinguished with his manner of acting on the background of other actors of the series.

In 2016 the drama The Correspondence came out on the screen. The plot is focused on the love story of the professor Ed Phoerum (Jeremy Irons) and the student Amy (Olga Kurylenko). There love story has no limits in time and space. Due to the excellent work of the director Giuseppe Tornatore the spectators can fell this movie from the beginning till the end.

Jeremy got acquainted with his first wife – the actress Julie Hallam when nobody knew his movie. At that time Irons was working in the theater but not as a member of the troupe but as support staff. Their love affair was developing promptly, and in a couple of months after the acquaintance, the young people registered their relations. However a year after their joint life they became conscious of the fact they weren't ready for the routine of family life and decided to file for the divorce.

The Irish theater, movie and television actress Sinéad Moira Cusack became the second wife of the eminent actress. The lovers got married in March of 1978, and they are together already for forty years and don’t leave each other even for a minute.

Till present days the spouses lead active social life: they attend presentations, movie displays and take part in the charity auctions and even take part in the movies together (Waterland, Stealing Beauty). In this marriage, they have two very talented sons: the photographer Samuel James Brefni Irons (was born on the 16th of September, 1978) and the actor Max Irons (was born on the 17th of October, 1985).

At the end of 2017, the fans of the DC Universe will see something interesting. In November there will be premiered the long-awaited movie Justice League. In the superheroic fighter directed by Zack Snyder Irons will transform into the butler of Mr.Bruce Wayne – Alfred Pennyworth. The character with whom the spectators have fallen in love for his sarcastic, cynical remarks is an essential part of the movies about Batman. The character is so popular that in 1994 he received a nomination for R.A.C. Squiddy Award as Best Supporting Actor.

Also, Jeremy will participate in the full-length movie dedicated to Batman's adventures. The picture of 2018 will be the sequel to the film Batman v Superman: Dawn of Justice. At the present moment, only the part of the actors who will take part in the picture is known. Also, it's confirmed that Jared Leto will take part in the movie (the role of the Joker) and the Australian actress Margot Alice Robbie will play the role of Harley Quinn. In the film, they will continue to develop the characters of their personages from the picture Suicide Squad. It's known for the fact that Deathstroke performed by Joe Manganiello will become the protagonist of the Dark Knight.

Except for the participation in the shootings, the actor is engaged in the theater. Together with Gary Oldman’s wife - the actress Lesley Manville, Irons will appear on the stage in the play Long Day's Journey Into Night Summary staged by the American playwright Eugene O'Neill. The author received the Pulitzer Prize for this play. The performance will be premiered in January of 2018 in London theater.

Despite the hard working schedule, the actor who is 187 cm tall doesn't forget about his admirers. In July-August of this year, Jeremy appeared at the following festivals - Little Gidding, Family Fun Day and West Cork History Festival. At the events, the eminent actor communicated with his fans in the relaxing atmosphere and was signing autographs for everyone. After that, the man published a new portion of the photos on his Instagram account where he often posts fresh video cuts.

It’s worth noting that the social network is not the only source from which Irons’s admirers can learn about the latest news from his life. On the different Internet portals and printed editions, there are often published the materials connected with the actor's creative career. Moreover, the information on the movie in which the British actor is planning to take part regularly appears on the official website of Academic Awards. 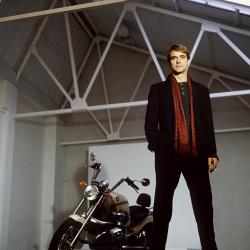