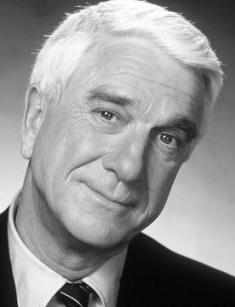 Leslie Nielsen is a Hollywood star who became famous after 50. The actor rose to prominence starring in the popular parody films: The Naked Gun, Scary Movie 3, 2001: A Space Travesty.

The future actor was born on February 11, 1926, in the southern province of Canada in a family of immigrants from Europe. His mother, Mabel Elizabeth, was a housewife and raised children, Leslie and his brother Erik. Father Ingvard Eversen was a constable in the mounted police. When Leslie turned six years old, the family moved to Edmonton, where the children could attend school.

During his studies, the boy became interested in theater. But his father was against his son’s activities, although Ingvard’s brother, Jean Hersholt, had already succeeded in Hollywood and even won two Academy Awards. Strict and religious parents influenced Leslie’s character. He mainly improved his acting skills communicating with the authoritarian father. Older brother Erik Nielsen was more serious and later became a statesman.

After graduating from school, Leslie was drawn to the color. Nielsen serviced during the Second World War and participated in the mobilization program. The young man was not sent to the front because he was legally deaf. After the end of the war, he began working as a host at the local radio station. Listeners looked forward to Nielsen’s program. His relaxed communication style, noble baritone, and jokes made Leslie the star of the town.

Therefore, the young man decided to enter the Lorne Greene Academy of Radio Arts. During his acting classes, Leslie became seriously interested in the theater, and at the age of 23 Nielsen went to New York City to study at the Neighborhood Playhouse. Nielsen immediately began to play in the conservatory theater not to waste time. The handsome man got the first bit parts in the movies Hallmark Hall of Fame, Studio One, The Climax.

In the mid-50s Leslie went to conquer Hollywood. Initially, the actor auditioned for television projects. It was a great success for him to participate in the television series Alfred Hitchcock Presents, which was broadcast for seven years.

During his early career, Leslie played in 32 movies. Young Nielsen got the most memorable secondary role in the musical melodrama The Vagabond King. He portrayed the only title character of the spacecraft commander in the fantasy thriller Forbidden Planet, which grossed $ 3 million at the box office.

In the late 50s, Leslie participated in the filming of the cult western Rawhide, which cast consisted of outstanding Hollywood stars: Clint Eastwood, Eric Fleming, James Murdoch, and Steve Raines. The crime series The Untouchables was released, in which Nielsen played in an episode. In general, the career of the young, resilient artist developed well.

In the 1960s, Leslie also got a lot of roles, but these were mainly bit parts in films of various genres: westerns, dramas, crime thrillers, comedies. The directors spoke well of the Canadian actor because he was always organized and focused in front of the camera. Having appeared in the films The Fugitive, Bonanza, The Wild Wild West, Harlow, Nielsen rightfully gained fame as an actor playing bit parts.

In the early 70s, Leslie Nielsen appeared in Norman Lloyd’s episode "Lady in Waiting" of the detective television series about detective Columbo. Nielsen's hero, lawyer Peter Hamilton, was suspected of Bryce Chadwick’s murder. Four years later, the actor was invited to an episode of the Columbo series entitled "Identity Crisis." In 1972, the actor appeared in the acclaimed disaster film The Poseidon Adventure, in which Nielsen’s hero braved the elements and did his best to save people.

In the 70s, Leslie became associated with the role of a brave military man. So, the actor appeared in the films The Streets of San Francisco, Bearcats!, M*A*S*H, Kojak. Twenty-one years after the first leading role, Nielsen landed the second one in the ecological horror film Day of the Animals, which told about the consequences of the destruction of the earth’s atmosphere. Christopher George and Lynda Day George played together with Leslie.

These works are considered to be preparation for the actor’s creative progress, which occurred in the mid-80s. It all started with a small role in the parody disaster film Airplane!, which grossed $83 million at the box office. Nielsen's character, Dr. Rumack, who was walking around the plane in euphoria, looked so real that the filmmakers noticed the actor. A year later, the directors of Airplane!, Jim Abrahams, Jerry, and David Zucker, offered Nielsen the role of Frank Drebin in the comedy detective series Police Squad!.

The image hit the mark, and later, The Naked Gun film series were released, which were considered the best projects of the actor. The parody movie with a funny and absurd plot was popular with viewers and grossed a lot at the box office.

Ridiculous detective Frank finds himself in unbelievable situations. He meets the Queen of the United Kingdom, goes to prison, helps scientists fight the mafia, neutralizes terrorists in Hollywood. In Russia, not only the original translation but also the dubbing of other people's translation, "Goblin's Dub," gained great fame.

In the 90s, the actor became associated with the comedy genre. The films Spy Hard, Mr. Magoo, Wrongfully Accused were released, in which Nielsen proved himself to be a tireless comedian. The major media outlets printed the photos depicting the actor’s grimaces. Films with his participation were box office success. Thanks to Nielsen, the parody genre has gained incredible popularity.

In 2000, Steven Spielberg made the parody film 2001: A Space Travesty, in which comedian Leslie was invited to play the leading role of Marshal Richard 'Dick' Dix. This time, the brave savior of humanity has to fight crowds of aliens and rescue the US president from captivity. After a series of films Santa Who?, Camouflage, and Men with Brooms, which consolidated the actor's success, the Scary Movie comedy franchise was released.

Nielsen’s partner on the set was Pamela Anderson, and Scary Movie 3 grossed $220 million worldwide. After that, some films premiered, including Superhero Movie, An American Carol, Spanish Movie, in which 80-year-old Nielsen was also energetic and tireless.

Leslie Nielsen did not tell reporters about his personal life. But it is known that the actor had four marriages.

The last wife of Leslie was Barbaree Earl, with whom the actor was in a relationship for 27 years. Nielsen had two daughters in the second marriage.

Shortly before his 85th birthday, Nielsen suddenly felt ill. He was admitted to the hospital where doctors diagnosed him with pneumonia.

After a while, on November 28, 2010, Leslie passed away from pneumonia. The actor was in a good mood until the last days of his life, and relatives always visited him.

At the time of his death, Leslie Nielsen had a net worth of about $20 million.